The Power of Laughter: Destress and Reconstruct Yourself 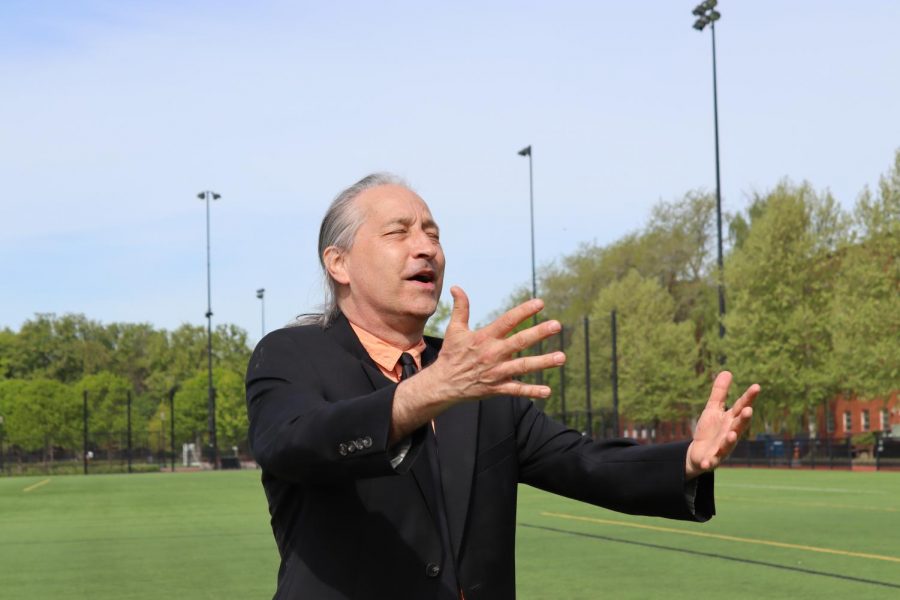 Many of us probably remember feeling the first wave of stress and panic over a year ago during the onset of the global pandemic when we suddenly had to transition into remote learning. But we weren’t the only ones. The staff at the University Information and Technology were working harder than ever before to make sure Zoom was functioning properly for all of the operations at Oregon State University.

It was for the consideration of UIT workers’ wellbeing that the Laughter Yoga Club came about. Having noticed the great deal of stress placed on those employed in UIT, Andrea Ballinger, vice provost and chief information officer of UIT, asked Jon Dorbolo, associate director of Technology Across the Curriculum and philosophy instructor at OSU, to brainstorm a solution.

“My intended message was to help our IT community create balance within their work from home lives,” said Ballinger via email. “Many of us have lost the ability to shut down after a normal work day, and instead, we invaded our personal lives with continual work at night because we are always on our computers. I wanted Jon to find a way to help OSU IT be reminded to take time for themselves and see this crisis as just another work challenge, not a permanent personal loss.”

And that’s when Dorbolo decided to learn more about laughter yoga.

According to Dorbolo, laughter yoga had started in 1995 when Dr. Madan Kataria went to a park in Mumbai, India with his wife and three friends and just laughed together there every morning. Initially having attracted weird glances directed their way, others eventually joined them, which expanded this activity into an organization called Laughter Yoga International.

Dorbolo ended up taking the training from Laughter Yoga International to get certified from Kataria himself. Upon Dorbolo’s reflection of the training, they hold much praise and admiration for Kataria.

“[Kataria] has this ability to use laughter in a way that is so powerful that even people that are very shy about it, get drawn into the power of what he’s doing,” said Dorbolo.

After receiving their certification, Dorbolo was able to officially launch Laughter Yoga Club at OSU. Dorbolo then turned to Tessie Webster-Henry, Counseling and Psychological Services coordinator for mental health promotion and suicide prevention, for help with promotion and getting started, and CAPS decided to sponsor Laughter Yoga Club. Webster-Henry created the marketing tools for outreach to students.

“I am happy to promote this program to the campus as it is a very different way to proactively support mental health,” said Webster-Henry via email.

Finally, it came time for the first Laughter Yoga Club meeting, which occurred on the first day of Spring Term 2021. Since then, more than 100 people have registered, and usually there is a group of 10 to 15 people who attend each Zoom drop-in session. Open to everyone including the OSU community and their families, Laughter Yoga Club meets every Monday and Friday from 4 p.m. to 4:30 p.m. Registration is available here.

Based on a literature review that Dorbolo has been working on, the health benefits of laughter yoga that are supported by peer reviewed studies include lower blood pressure, lower stress levels, improved mood and sleep, decreased risk of diabetes and higher academic performance.

As a philosophy instructor, Dorbolo also analyzes laughter yoga from a philosophical perspective. They recalled that Kataria made a distinction between humor and laughter, with humor defined as being triggered by something funny whereas laughter differs in that it is an intentional behavior. As a result, laughter yoga reduces stress not by getting rid of it, but by changing the body’s reaction into a more positive response.

Scientifically, Dorbolo explains that the adrenal gland releases a hormone called cortisol when the human body is undergoing stress, initiating the flight or fight response. When two groups of people were tested under the same stress conditions, the experimental group that had been doing laughter yoga had lower cortisol levels than the control group that had been reading magazines. In addition, it has been found that the body cannot distinguish between real and voluntary laughter.

The conclusion that can be drawn is one can learn to change their habit and behavior into laughter, especially when faced with challenges. Consequently, it allows one to feel in control of themself.

“You need to be able to conceptualize yourself in a certain way,” said Dorbolo. “You think of yourself differently. When you think ‘I actually have the ability to manage my emotions rather than have them manage me,’ it causes us to think differently about who we are.”

Interestingly, Dorbolo brings up a simple example of having trained themself to laugh when stopping at a red light.

“I’ve got to a point where a lot of the time, I actually do get to a red light—I started laughing,” said Dorbolo. “That’s become my response to that stimulus. It doesn’t make me happy that I’m at a red light, but it changes my response to the circumstance, which is huge.”

But what about the “yoga” part of laughter yoga? Normally, yoga involves controlled and intentional breathing, and it’s best if the breathing comes from down in the lower diaphragm. Dorbolo emphasizes that yoga pairs well with laughter, because the breathing from laughter does indeed happen in the lower diaphragm naturally, and this is termed as a “belly laugh.” Along with breathing, movement also comes into play during laughter yoga. During the Laughter Yoga Club sessions, Dorbolo incorporates stretching, clapping and dancing as well.

Dorbolo’s favorite part about Laughter Yoga Club is they love the people there and the heartfelt connection from laughing with others. Back when school had been in person, Dorbolo would try to meet and chat with students all the time, and although they dearly miss that social aspect, Laughter Yoga Club has created a new community for Dorbolo.

“Here’s what I miss,” said Dorbolo. “Every single day I walk around campus and talk with students. I talk to a dozen or more students a day that I don’t even know, talking to them about their programs, what [they are] doing and sometimes they tell me their troubles. It’s been one of the happiest parts of my life. And this last year, I’ve had none of that. So I missed that connection. I’ll say that the Laughter Yoga Club is bringing it back, particularly when students show up, that makes me really happy.”

The feedback that Ballinger has received from participants is that they feel “refreshed after attending,” which makes her proud that the initial goal and intention of Laughter Yoga Club has been met.

Dorbolo said that although people laugh voluntarily at first during Laughter Yoga Club, “it soon turns into real and contagious laughter.”