Dogecoin Barks Its Way Up 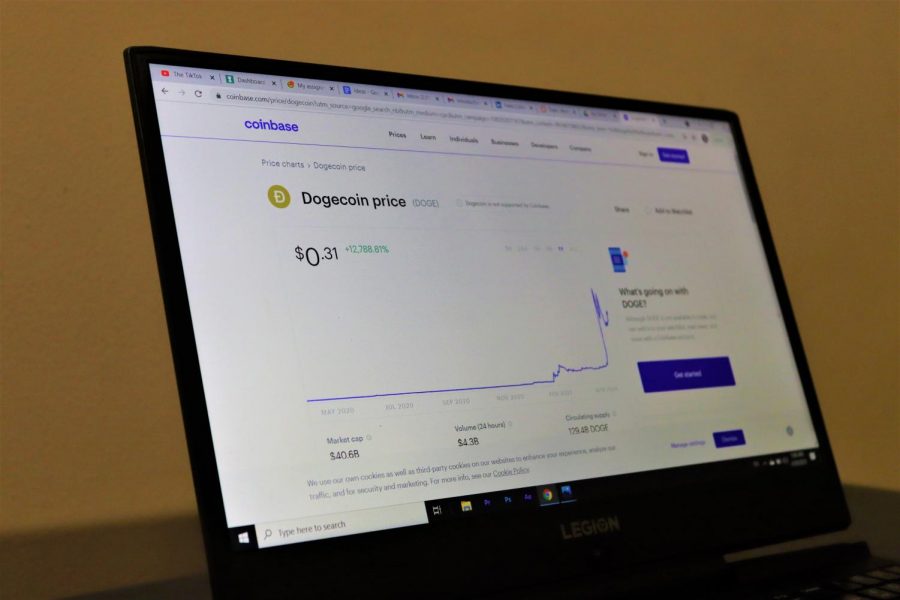 This image features a graph displaying a sharp increase in the cryptocurrency Dogecoin since January 2021.

From meme to mainstream, Dogecoin, a form of cryptocurrency, has climbed its way up in the market to become an investment asset worth about $50 billion as its value and popularity have rapidly increased.

According to the Wall Street Journal, Dogecoin was jokingly created in 2013 to poke fun at Bitcoin, the first kind of cryptocurrency. The logo was made from “Doge,” a popular meme at the time which featured a Shiba Inu dog.

To put it simply, cryptocurrency is a digital form of money that is encrypted and decentralized, meaning that people can trade their assets digitally in a secure and anonymous manner. It can be exchanged online for goods and services, as many companies offer cryptocurrencies, or “tokens,” for consumers to buy and use in exchange for whatever the companies have to provide.

Compared to traditional types of money like the euro or U.S. dollar, there’s no central authority that manages and maintains the value. The currency is broadly distributed by its users through the internet instead. These transactions are verified and recorded in a program called a blockchain.

Recently, Dogecoin’s buyers have gone a step further and transformed what was meant as a joke into a real asset. This has given some traders who piled in early an extreme amount of gains. Many people were more willing to participate because of the wave of stimulus checks that hit their deposits and the low borrowing costs of cryptocurrencies. This is on par with GameStop’s extraordinary strides at the beginning of the year, when traders on Reddit and other social media platforms turned GameStop, into a stock market powerhouse.

“Doge Day,” which took place on Tuesday, April 20 was the latest mania from the market. This was an attempt to raise the currency’s price up to $1 from nearly 39 cents on the Monday before that and from less than a penny in January. These events reflect the mass impact online communities have on market prices and the expectations that it will continue to rise.

According to a Forbes article, Dogecoin’s format is similar to Etherum and Bitcoin cryptocurrencies since it runs on blockchain technology too. What that means is all transactions are made using a decentralized digital currency and are stored in a distributed, secure digital ledger, which is an account or record used to document transactions.

All holders are able to carry an identical copy of the ledger which is often updated with new transactions. This network also uses cryptography to keep them secure like other cryptocurrencies.

The abrupt rise in Dogecoin reveals the most unconventional trades can sometimes produce promising results. To put this into context, someone who invested $10,000 in Dogecoin in late December would have amassed more than $821,000 as of last week.

The rise and fall of these assets have been contained, though. People in the market are keeping a close eye on fluctuations. A fall in prices in cryptocurrencies like Dogecoin or Bitcoin could prompt hedge funds and other large investors to reduce risky holdings, which would contribute to more pullback from the stocks.

Increased interest in cryptocurrency stocks is also based on the rise of social media trends and influence surrounding cryptocurrencies like Bitcoin and Dogecoin. Those who contributed to its massive popularity include Elon Musk, Snoop Dogg and even Slim Jim. The avid activity and shares on Twitter along with Dogecoin’s large following can really help it head to the moon like many fans hope it does.

If you’re considering investing some of your money into this currency, here are a few things to consider. There is little incentive to pursue Dogecoin in the long run since there is no lifetime limit on how much of it can exist. This means millions of them can be created, which would ultimately decrease its value. Bitcoin, however, continues to rise in value because the system’s lifetime cap can be created according to the number of coins available.

Whether you’re a novice to the market or an experienced investor, the choice of buying Dogecoin is up to you. It’s important to keep in mind the risk that’s involved in this unique currency. Familiarizing yourself with the system and having a few coins would be a good place to start. It’s important to be prepared and informed if you’re thinking of entering this dog-eat-dog world.