Breaking Down Title IX: How the Law Supports You 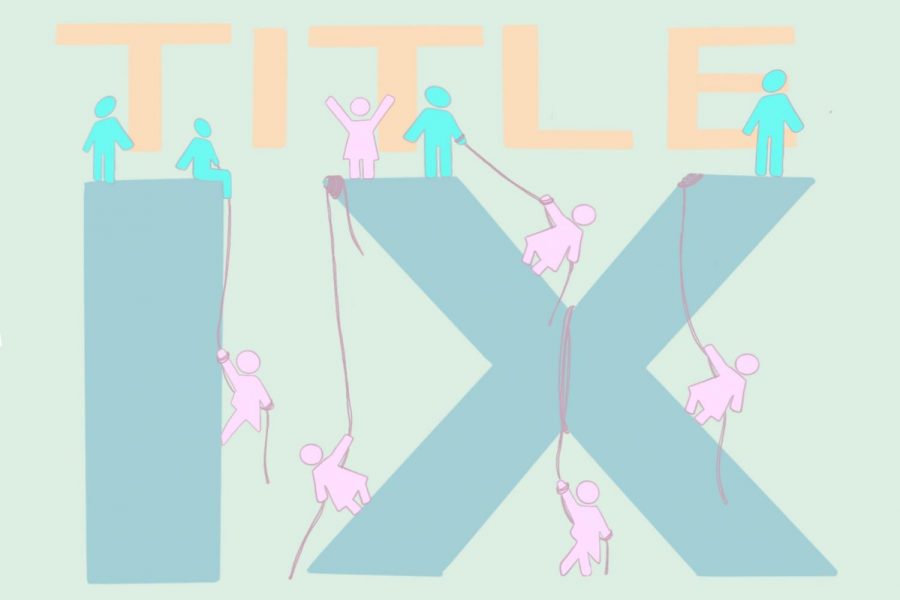 This illustration depicts women climbing up to the same level as men with the help of Title IX. The goal of title IX is to eliminate discrimination based on sex in education programs and activities.

There were calls for his resignation, an outpouring of support for survivors of sexual and interpersonal violence and public expressions of anger and disappointment over the LSU case because, yet again, claims of sexual misconduct were not taken seriously.

So what is Title IX exactly, and what does it do for students?

Kate Hildebrandt, the civil rights and Title IX specialist for the Oregon Department of Education, said that Title IX is a federal civil rights law passed in 1972 that prohibits sex discrimination in federally funded educational programs.

This means that any K-12 school or college that takes federal money must prohibit sex discrimination in all parts of its educational programs, which includes all academics, co-curricular activities and sports.

“When Title IX was first passed, some of the biggest public issues that prompted it were lack of funding and support for women’s sports at all educational levels, as well as education equity issues like college and professional degree admissions,” Hildebrandt said in an email.

“The original intent of Title IX was to address sex discrimination and inequity faced by women, but Title IX covers people of all genders and protects all students and staff of federally funded educational institutions from sex discrimination.”

Carli Rohner is campus coordinator for the Oregon Attorney General’s Sexual Assault Task Force. She provides training and technical assistance regarding campus-based sexual violence for all of Oregon’s colleges and universities.

“A helpful way to think of Title IX is that these policies create a ‘baseline,’ they create a shared understanding that harassment based on sex is not acceptable in an educational environment,” Rohner said.

“However, policies are just that: words. They become effective when they are clearly written, enforced consistently and equitably, when policies are transparent, accessible and informed by the greater community—students—that are impacted by them, and when paired with primary prevention efforts that seek to prevent violence from happening in the first place.”

“In its current iteration, Title IX protects students by ensuring that all schools receiving federal funding create and enforce policies outlining that sexual harassment is prohibited, have a ‘prompt’ response to reports of sexual harassment and violence, employ a Title IX Coordinator to coordinate school policy creation and response to sexual harassment, have clear grievance procedures [and] provide supportive measures—measures that can help a student maintain access to their education, like class changes, counseling, etc.—for students that have reported violence,” Rohner said.

Rohner said that Title IX creates a framework for colleges and universities to respond to reports of sexual harassment in a nondiscriminatory manner.

“Because these policies are required to be in place, it creates one pathway or option for student’s that have been harmed to seek assistance from their school, address the violence that has occurred and prevent future violence from occurring,” Rohner explained.

Rohner provided a general outline of what Title IX processes may look like.

First, a report of harassment is made by a student, staff or faculty member to a school official with authority to address the violence. School staff speak with the reporting party, ensuring that the person who has experienced violence has access to supportive measures to help continue pursuing their education. The school should take a reporting party’s wishes about whether or not to proceed with an investigation into account.

Parties involved are notified about the investigation and interviewed. Then evidence is collected by staff trained to investigate sexual harassment and compiled into a written report.

Depending on the school’s process, there may be a hearing to review evidence, allowing any parties the opportunity to answer questions from the staff conducting the hearing.

In addition, Hildebrandt explained that the U.S Department of Education’s Office of Civil Rights issues guidance documents to inform schools how they currently interpret or plan to enforce Title IX. The OCR can also pass new regulations related to Title IX, which can then be added to the regulatory text of the law.

In recent years, Title IX has seen significant changes under the hand of different federal governments.

Most of the recent changes have been specific to sexual harassment, according to Hildebrandt.

“Between 2011 and 2016, [the] OCR under President Obama issued a series of letters—guidance documents—that specifically addressed sexual harassment and sexual assault, and gave schools direction as to how they were to respond to reports of harassment.

“But the problem with guidance documents is that they can be issued by one Secretary of Education, and revoked by the next—this is in contract to regulations, which go through a more extensive review process, and are therefore harder to change or revoke.”

And that’s exactly what happened. In 2017, Hildebrandt said the OCR under President Trump decided to go a different direction with Title IX.

“They revoked some of the previous guidance, including important guidance documents from 2011 and 2014 that had addressed sexual assault and sexual harassment, and went through the process to write and pass regulations related to sexual harassment,” Hildebrandt said.

“Those regulations became final in May 2020—and went into effect in August 2020—and they made pretty significant changes to how both colleges and K-12 schools respond to sexual harassment.”

A few of the more significant changes made to the guidance documents included the definition of sexual harassment, which Hildebrandt said was drastically changed by new regulations from the Trump administration.

“The previous definition, defined by a guidance document released in 2001 from OCR, was ‘unwelcome conduct of a sexual nature’ and included two subtypes: quid-pro-quo harassment and ‘hostile environment’ harassment, and also covered sexual assault,” Hildebrandt explained.

The new three-part definition is: one, quid-pro-quo harassment; two, ‘unwelcome conduct determined by a reasonable person to be so severe, pervasive and objectively offensive that it effectively denies a person equal access to the recipient’s education program or activity;’ and three, sexual assault, dating violence, domestic violence and stalking.

The OCR under Trump also changed regulations regarding the location of harassment.

Under the new regulations, schools are only required to respond if it actually happened as a part of the education program or activity.

Regulations regarding an educational program’s knowledge of sexual harassment were also changed in 2017.

“Previously, both colleges and K-12 schools were required to respond to sexual harassment if they ‘know or reasonably should know’ about it,” Hildebrandt said.

“Most schools, including colleges, interpreted this to mean that once any employee knew about sexual harassment, or reasonably suspected sexual harassment, they were required to report it to the Title IX Coordinator so that it could be appropriately handled.”

The new regulations still require all K-12 school employees to report harassment to the Title IX Coordinator, Hildebrandt said, but colleges and universities are no longer required to report it.

Rohner noted that this definition of ‘knowledge of sexual harassment’ can be limiting, especially if a student experienced harassment one time or was not on campus, among other situations.

“However, in 2019, Oregon passed HB3415, a law that requires schools to respond to all reports of sexual harassment, including sexual assault, stalking, dating violence, domestic violence and rape,” Rohner said.

“Because of this, Oregon schools must respond to all reports of sexual harassment or violence brought to the school, and many schools will have a ‘Title IX process’ and a ‘Oregon/HB3415 process’ in their conduct policies.”

Rohner uses the ‘floor’ approach to explain the importance of holistic prevention measures against sexual violence.

“When working with colleges and universities across Oregon, we say that compliance measures, including Title IX, act as a metaphorical ‘floor’: to really address violence, schools must go beyond minimum requirements outlined in law, and address root causes of violence—like racism, sexism, ableism—to create a more student-centered approach,” Rohner said.

Furthermore, Rohner said that effectively and compassionately responding to violence that occurred using Title IX frameworks is only one part of the solution to ensure students continue to access their education free from violence.

“Schools must make certain that they are providing enough confidential resources—advocates, counselors with background in interpersonal and sexual violence—to respond to survivors based on their campus size and must invest their energy and resources in primary prevention work, including ensuring that the college or university has adequate prevention staff for the number of students attending the school, budget for primary prevention initiatives,” Rohner said.

Metaphorically, she added, prevention and response are two sides of the same coin.

“Schools that can attend to both primary prevention of sexual harassment or violence and respond in a meaningful way to said harassment are more successful in creating safe, healthy campus communities,” Rohner said.

At OSU, the Office of Equal Opportunity and Access conducts Title IX investigations.

Survivors, as well as anyone who has questions about receiving support, can access the Survivor Advocacy and Resource Center to view the wide range of options and information available to students.

“Reporting is something we speak to survivors about, and we explain what processes would like through EOA, and also what law enforcement reporting would look like,” Becca Williams, the director of SARC said. “Our approach to advocacy is providing information so that survivors have the choice and autonomy to make their own decisions around that, and we support survivors regardless of whether or not they decide to report.”

If a survivor does wish to engage in an EOA process, Williams said SARC can support and accompany them throughout any and most parts of that process.

“And, because we are confidential, a survivor coming to SARC to seek services is not the same as a survivor reporting an incident to EOA or Title IX,” Williams said. “We do not share out any survivor information with outside entities without the survivor’s explicit consent.”