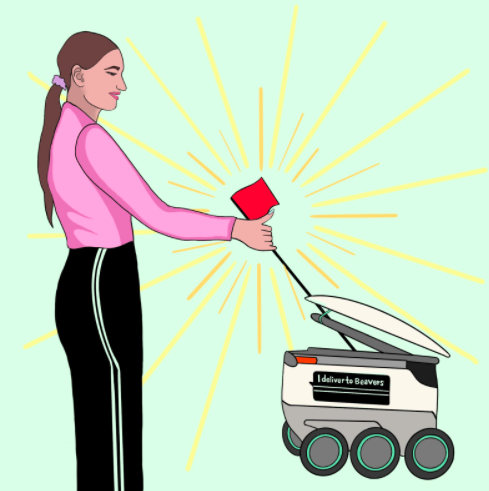 By Soleil Haskell, OMN Illustrator.The representative “handshake” symbolized above portrays the agreement between OSU students and robots on campus. Etiquette between students and OSU robots is crucial in keeping campus operations running smoothly.

By now you’ve probably seen the little white robots rolling around campus and wondered what the hell they are. These are University Housing and Dining Services’ answer to COVID-19: delivery robots.

Developed by Starship Technologies, these little rovers deliver food from the dining halls and Memorial Union all around campus. They navigate via a combination of GPS tracking, artificial intelligence and machine learning.

Oregon State’s fleet consists of 37 rovers which operate day and night. They’re taken offline after campus closes for charging and maintenance, and then they’re good to go again. They’re sanitized after every delivery and are insulated to keep food hot or cold.

“This is a joint venture between UHDS and the Memorial Union dining services,” said UHDS director Kerry Paterson. “We’re two separate locations both partnering with Starship to bring the robots to campus.”

Students and faculty can order campus food using the UHDS app as long as they’re on or near campus. Thus far purchases can only be made with dining dollars or orange cash, but Paterson’s confident that credit card support will be coming in the following weeks. Initial reception has been positive, Starship says they look forward to their future on campus.

“A lot of students have taken a liking to seeing them around campus,” said Starship representative Scott McKirdy. “They even want to help the robots in situations where they’re stuck, so it’s definitely a good response from the campus so far.”

The robots can make for some interesting interactions around campus. Time after time I see cars playing chicken with the robots at a crosswalk. Ordinarily a pedestrian has the right of way, but robots aren’t pedestrians, so who moves first?

“The robots aren’t humans, so they’re not gonna be waving you on or telling you to go,” said McKirdy. “If there’s a robot waiting on the sidewalk, just cruise along by it.

Sometimes accidents happen. A few weeks ago one robot was the unfortunate casualty of the train which runs through campus.

“We believe somebody took over the camera feed while the train was coming, it was really just user error,” said McKirdy. “Luckily this was our first and hopefully only train incident we’ve had.”

Some of the more mischievous out there might wonder if the robots could constitute an easy meal. They aren’t very fast, it couldn’t be hard to catch one on foot and swipe the food inside.

“The food is locked all the way through transportation,” said Paterson. “You can’t run up to the robot, lift the lid and run off.”

When a customer’s food is ready, they meet the robot outside and use the app on their phone to unlock the robot to retrieve their food, so unless somebody takes your phone, your nobody can abscond with your meal.

Oregon State is one of a handful of universities across the country to adopt this approach to contactless delivery.

“We have roughly fifteen schools that we’re partnered with and six more where we’re launching in the next four or five months,” said McKirdy. “Oregon State is the first and only in Oregon.” He’s optimistic that the robots’ success here will lead to more schools to adopt them.

As in-person instruction resumes, Oregon State hopes that the robots will become a campus mainstay

“As students return to campus we’ll likely see a different demand,” said Paterson. “The Memorial Union will potentially bring on more concepts as they open up units in the academic buildings. We’ve still got some expansion to do, new concepts and other fun things we might investigate.”