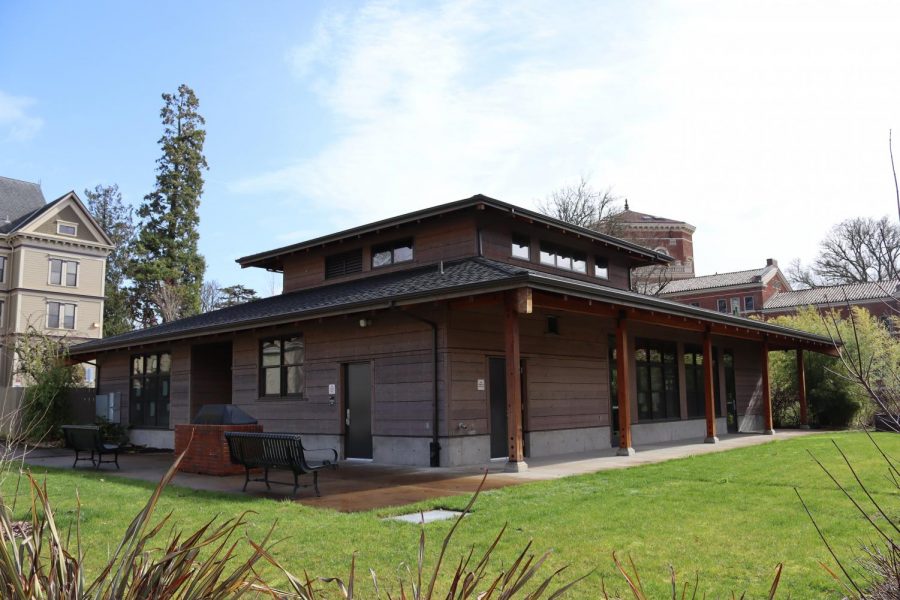 The Asian Pacific Cultural Center(APCC) can be see pictured above. With hate crimes being committed against the Asian community, the APCC is a perfect place for people of any class or creed to feel safe on the OSU campus.

Correction: Sara Caldwell-Kan’s name was originally misspelled. The Asian Pacific Cultural Center also uses but did not create the Asian American Justice Toolkit. Both corrections have been made.

“It was disgusting,” says Austin Peng, an officer for the Oregon State University Cambodian Student Association. “But I’m not surprised by it and that’s the sad reality of it.” This was a common sentiment when I asked people about how they reacted to attacks against the Asian community.

For Reagan Le, the Diversity and Cultural Engagement Director at Oregon State University, these recent events were also not surprising. “It’s also disheartening to know that some people see this as something new. COVID elevated the awareness of it, but this is a common occurrence for the Asian community.”

The history of anti-Asian violence and hate goes way back in American history. In People vs. Hall 1854, the California Supreme Court ruled that “No Black, or Mulatto person, or Indian shall be allowed to give evidence in favor of, or against a White man. Held, that the words, Indian, Negro, Black, and White, are generic terms, designating race. That, therefore, Chinese and all other people not white, are included in the prohibition from being witnesses against Whites…”

This ruling made it so that the testimony of any person who was Chinese be inadmissible. This ruling was predicated entirely on race and the premise that the Chinese and other non-white races did not have the intelligence to think critically.

Similar bigoted trends have remained stable since then. In 1871, Los Angeles California, a mob of 500 men savagely beat, robbed, and murdered 20 Chinese men. Their corpses were later hung across the market square after their possessions had been stripped from their body. The incident sparked after a police officer and bystander were accidentally killed in a conflict between two Chinese gangs. These unfortunate deaths fueled rumors that claimed the Chinese were indiscriminately killing Angelenos in the area. With the ruling of People vs Hall in 1854, the Chinese community in California had very little confidence in the state’s justice system. Ironically, this very system that boasted of security, order and prosperity barred hard-working people from actualizing their “American Dream”. Fortunately, the ruling was finally repealed in 1873.

These instances of discrimination and violence are not limited to one group, time or place. Throughout history, there have been numerous cases where entire communities have been targeted, oppressed, and wiped out solely because of their race or culture.

The Black Plague of 1346, considered one of the worst pandemics in history, took the lives of an estimated 75 to 200 million people. Mixed in with the suffering of millions from the plague was the disease of hatred. Before the plague could even reach the cities, the townspeople would have already been paralyzed by fear. These fears driven by suspicion and centuries of anti-semitic rhetoric positioned the Jewish community as the perfect scapegoat for the plague.

In 1349, three years into the plague, 2000 Jews were rounded up and burned alive in Strasbourg France. During the Spring of the same year, 3000 more Jews were massacred in Frankfurt Germany. By 1351, over 250 Jewish communities had been wiped out in a total of 350 massacres conducted across Europe. Their needless deaths were incited by roomers that they had poisoned the water wells of the city and that they were responsible for bringing the sickness to Europe. The plague would continue for another 2 years.

In 1987, a group called the “Dotbusters” roamed the streets of Jersey City, New Jersey, attacking and threatening those of the Indian community. In particular, those who practiced Hinduism were targeted because of the traditional Bindis (A bindi is a coloured dot worn on the centre of the forehead, originally by Hindus and Jains from the Indian subcontinent) often seen on the foreheads of women and girls in the religion. Sickeningly, this is also where the name of the hate group originated from. Within the next six years, more than 50 people would be beaten to near-death and hundreds of homes vandalized by this hate group.

In 2021, according to the NYPD, there has been a 1900% increase in anti-Asian sentiment within New York City alone. However, this “sentiment” is not isolated just in New York. Through the development of technology and social media, we can clearly see with our own eyes the inequity that afflicts Asian communities across the country.

On Jan. 28 of this year,  Vicha Ratanapakdee, an 84-year-old man who immigrated from Thailand was out enjoying the morning sun as he always does. Suddenly, a man from across the streets runs toward him and violently shoves him to the ground. As seen in the video, the impact sends Vicha’s head crashing into the pavement. Two days later, he passes away in the hospital, never to see his children or grandchildren ever again.

As mentioned earlier, racism, bigotry and discrimination are not limited to one group or the other. It is a sickness that has and will continue to  plague communities all across the world. At the heart of the issue is hatred and disdain for one another that can last for generations if not resolved properly.

This is not a conflict between one race and the other. It is a struggle for human decency and understanding. Racism is not innate, but we can become racist through the ideas we choose to adopt from others. In this aspect, spending the time to educate ourselves and  the community is the first step in breaking the grip of racism.

“I think the biggest thing is educating ourselves.” Says Reagan. “Take an ethics studies class, engage with the APCC or other student organizations.”

To help with this effort, the APCC uses a resource created by other communities throughout the country called the Asian American Racial Justice Toolkit. The tool kit can help with understanding anti-Asian history and also how to talk about these issues to the broader community.

An essential point that Sara Caldwell-Kan, an Assistant Director of the APCC, made was how and where we can engage with the community for change.

“Sometimes we get upset at who is representing us in student government. But the flip side of that is if we start showing up in those spaces then we’ll be representing ourselves,” Caldwell-Kan said. “If we want our interest to be heard, it is important to have leaders and representatives who are willing to hear what we have to say.”

Asian communities throughout the country have taken up the initiative in places where institutions have failed and media coverage is lacking. This can be seen through the work of groups like Asian Americans Advancing Justice. A human and civil rights non-profit that recently formed a website, https://www.standagainsthatred.org/, dedicated to reporting hate crimes against Asian Americans and Pacific Islanders.

Based in the West Coast, the AAPI is an organization that works to empower Asian Americans and Pacific Islanders as well as promote awareness regarding AAPI hate. Their program,Stop AAPI Hateis also aimed at reporting and keeping track of hate crimes within communities throughout the country. The website also includes a guideon things to consider when encountering or witnessing hate.

Oregon State University also has a reporting service of its own that can be used to report incidents from stalking, sexual misconduct, bias and even COVID-19 misconduct. The Student Health Services also offers a service called the Survivor Advocacy & Resource Center (SARC) that supports victims of sexual assault, harassment, bullying and domestic abuse.

As an ending message, solidarity and unity in the fight against hatred is vital. Hatred aims to tear people apart and pit them against each other in cruel and unfathomable ways. Its fuel is ignorance and that must be confronted with civility, education and intent.

There is much to improve, and as Mahatma Gandhi said, “You must be the change you want to see in the world.”