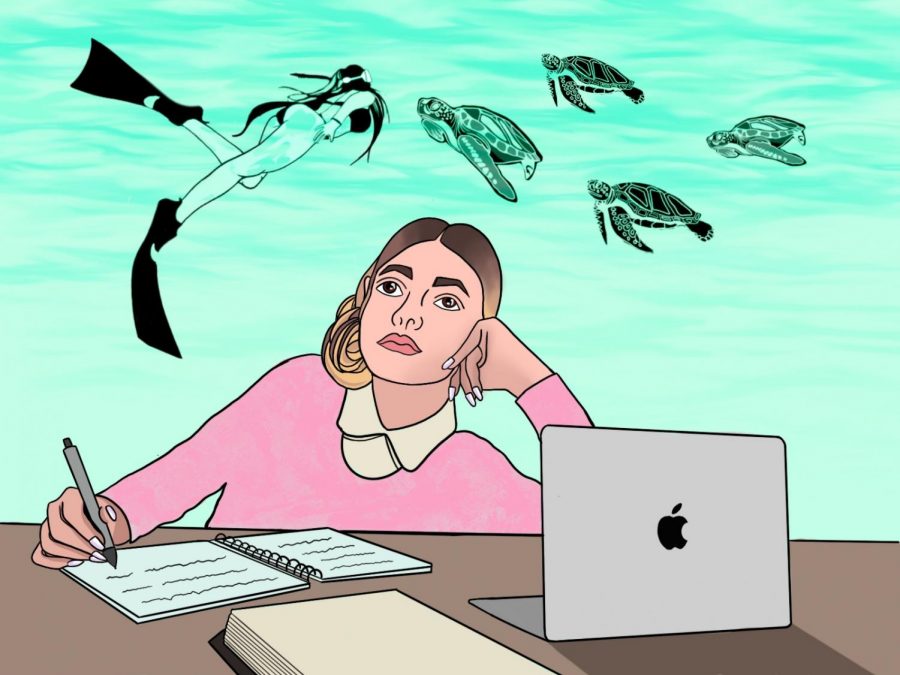 This illustration represents the predicament of all 2020 freshmen, who, after deciding to do their first year of college online in the midst of Covid-19, may be feeling like they should have taken a gap year instead.

Of all the different demographics who’ve been affected by COVID-19, college freshmen are getting hit the hardest. While most of us were at least somewhat established, this year’s freshmen were thrown immediately into the deep end with little warning.

Once upon a time, Oregon State had planned to offer in-person education for Fall 2020, but Fall has come and gone. We’re halfway through winter and we’re still attending Zoom class, leaving the freshmen stuck in their dorms with nowhere to go.

“I was a little disappointed [when they made the Fall announcement,]” said Oregon State freshman Charlotte Fuchs. “I kept checking my class schedule to see if any of my classes were still in-person.”

Like the rest of us, many freshmen remained cautiously hopeful as Fall and Winter were determined to be online.

“I was hoping to get an in-person class sometime my freshman year but I didn’t expect it,” said Oregon State freshman Jackson Mcarthur. “I knew I signed up for all online.”

In addition to other Covid restrictions, freshmen not wanting to go home have only one place to go. While the dorms are normally supposed to be a great social melting pot for freshmen to meet new people, dorm restrictions are harsh, making social interaction a challenge.

“I knew there would be restrictions but I thought since we were all getting tested it wouldn’t be that bad,” said Fuchs. “But they’re really strict, I’ve gotten in trouble a couple times because of Covid policies.”

“I understand why all these rules are in place, it’s to keep us all safe, but to be frank, wearing a mask to walk to the bathroom is kind of miserable,” said Mcarthur. “It all makes sense, but the result is that it’s pretty hard to meet people and make friends.”

Remember getting together for a movie in the lounge? What about cooking with people you just met? Or impromptu dorm parties? Unfortunately for this year’s freshmen, all those are nigh impossible.

“We have to be creative with how we spend our time, my friends can’t come to my dorm, we can’t play pool, we’re so restricted,” said Fuchs. “We can’t even have more than two people in the elevator, so that sucks if only one person has to take four flights of stairs.”

Now that Spring will be online as well, this year’s freshmen will have had zero time in the classroom to show for their first year of college.

“I was pretty certain Winter was going to be all online but I was still pretty hopeful for Spring,” said Mcarthur. “I was pretty sad when they called Spring so early, I feel like there was certainly potential.”

While disappointing, perhaps there are upsides to a second online Spring term.

“I’ve really adapted, to the point where I was almost happy that Spring term was gonna be online,” said Fuchs. “I’m used to getting out of bed and five minutes later joining class. My friends and I joke about how we’re gonna be freshmen again next year because none of us know where any of the buildings are.”

With many freshmen moving out of the dorms and back home, it’s worth wondering if some would’ve preferred taking a gap year to a year of online school.

“If I had known it would be all online all year I would have thought a lot harder about taking a gap year,” said Mcarthur. “It was already pretty close knowing just Fall was online, so I probably would have worked for a year and then come back when things are closer to normal.”

“I don’t think I would’ve taken a gap year,” said Fuchs. “I want to go to law school, so that would put me on an eight year timeline instead of seven. I’d probably still live on campus too because I wanted to get away from my parents.”

It’s not the year any of us expected but it’s the year we’ve got. This year’s freshmen are going to have one of the most unique introductions to college of any incoming class. Here’s hoping next year they can have a slightly more traditional college experience.