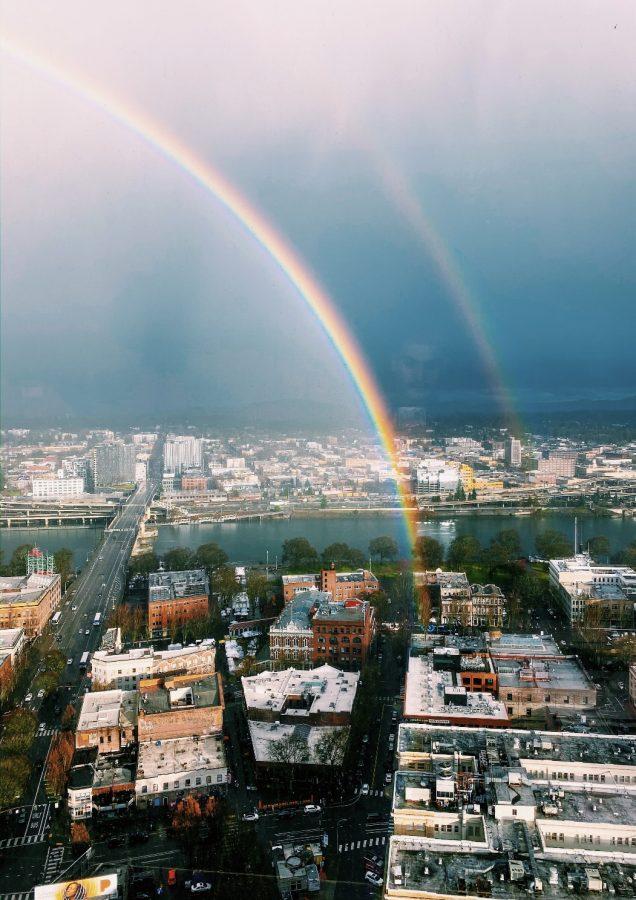 A double rainbow appearing on a Portland afternoon. After the pouring rain came two rainbows flowing into the city.

Sex refers to a set of biological attributes in humans and animals. It is primarily associated with physical and physiological features including chromosomes, gene expression, hormone levels and function, and reproductive/sexual anatomy. Sex is usually categorized as female or male but there is variation in the biological attributes that comprise sex and how those attributes are expressed. This binary way of categorizing biological sex is primarily rooted in Western cultures and may not apply to all cultures around the world.

Gender refers to the socially constructed roles, behaviors, expressions and identities of girls, women, boys, men and gender diverse people. It influences how people perceive themselves and each other, how they act and interact, and the distribution of power and resources in society. Gender identity is not confined to a binary (girl/woman, boy/man) nor is it static; it exists along a continuum and can change over time. There is considerable diversity in how individuals and groups understand, experience and express gender through the roles they take on, the expectations placed on them, relations with others and the complex ways that gender is institutionalized in society.

Gender identity – A person’s inner sense of their gender. For example, identifying as  girl/woman/female, boy/man/male, something else, or having no gender.

Sexual orientation — How a person characterizes their emotional and sexual attraction to others.

Agender — A person who identifies as having no gender, or who does not experience gender as a primary identity component.

Ally — A person who actively supports the rights of a marginalized community even though that person is not a member of that community; for example, a heterosexual person who campaigns for the rights of gay people.

Aromantic — A person who experiences little or no romantic attraction to others. Aromantic people may still choose to have intimate relationships.

Asexual —  A person who experiences little or no sexual attraction to others. Asexual people may still engage in sexual activity because libido does not equal attraction.

Bigender — A person whose identity consists of two distinct genders.

Bisexual — A sexual orientation that describes a person who is emotionally and physically attracted to those of the same or different gender.

Demisexual, grey asexual — A person who does not experience sexual attraction before forming a strong emotional connection with a potential partner. This identity falls on the asexual spectrum.

Genderfluid – A person whose gender identity is not fixed and exists on a spectrum. A person who is gender fluid may feel like a mix of more than one gender, but may feel more aligned with a certain gender some of the time, another gender at other times, both genders sometimes, and sometimes no gender at all.

Genderqueer — An umbrella term that describes a person whose gender identity falls outside the traditional gender binary of male and female.

Gender dysphoria —  Distress experienced by some people whose gender identity does not correspond with their sex assigned at birth. The Diagnostic and Statistical Manual of Mental Disorders (DSM-5) includes gender dysphoria as a diagnosis for people whose distress is clinically significant and impairs social, occupational, or other important areas of functioning. The degree and severity of gender dysphoria is highly variable among transgender and gender-diverse people.

Intersex — Umbrella term describing people born with reproductive or sexual anatomy and/or a chromosome pattern that can’t be classified as typically male or female. The medical community sometimes uses the term differences of sex development (DSD); however, the term intersex is recommended by several intersex community members and groups.

Lesbian — A sexual orientation that describes a woman who is primarily emotionally and physically attracted to other women.

Non-binary – A person whose gender identity falls outside of the traditional gender binary structure of girl/woman and boy/man. Sometimes abbreviated as NB or enby.

Pangender — A person whose gender identity consists of all genders available to them within their cultural and life experiences.

Pansexual — A sexual orientation that describes a person who is emotionally and physically attracted to people of all gender identities, or whose attractions are not related to other people’s gender.

Polyamorous —  A person in a sexual and/or romantic relationship comprising three or more people. Can also describe a polyamorous relationship; sometimes abbreviated as poly.

Queer — An umbrella term describing people who think of their sexual orientation or gender identity as not heterosexual or cisgender. Some people view the term queer as more fluid and inclusive than traditional categories for sexual orientation and gender identity. Although queer was historically used as a slur, it has been reclaimed by many as a term of empowerment.

Questioning — A person who is exploring their sexual orientation and/or gender identity.

Transgender — An umbrella term that refers to people whose gender identity differs from the sex they were assigned at birth; for example, a person assigned female sex at birth who identifies as a man; or a person assigned male sex at birth who identifies as a woman. Transgender can also include people with gender identities outside the girl/woman and boy/man gender binary structure; for example, people who are gender fluid or non-binary. Sometimes abbreviated as trans.

Trans man / transgender man — A transgender person whose gender identity is boy/man/male may use these terms to describe themselves. Some will use the term man.

Trans woman / transgender woman — A transgender person whose gender identity is girl/woman/female may use these terms to describe themselves. Some will use the term woman.

Two-Spirit — A person who embodies both a masculine and a feminine spirit. This is a culture-specific term used among some Native American, American Indian, and First Nations people.