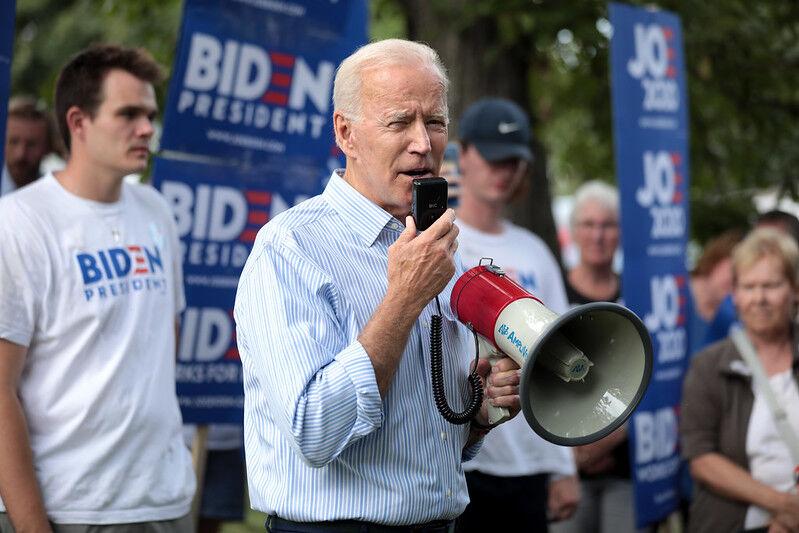 Former Vice President Joe Biden speaking with supporters at a pre-Wing Ding rally at Molly McGowan Park in Clear Lake, Iowa. The presidency of Joe Biden began on January 20, 2021, when he was inaugurated as the 46th president of the United States. Photo Courtesy Gage Skidmore

Within the past year alone the United States has faced and will continue to contend with challenges that will define this new decade’s history.

The election of Joseph R. Biden Jr. into office last November signifies the branching of U.S history onto a different course. Nevertheless, the issues this country and the world face still remain prevalent. So, how has and how will President Joe Biden and his administration confront these towering giants?

As of today, COVID-19 has claimed the lives of approximately 479,000 people. By the 1st of June this year, it is projected that the total number of people killed in the U.S will reach 645,000 people. Fortunately, if everyone is able to keep on with proper social distancing and quarantine regulations, projections lower to 580,000 mortalities, still being a devastating statistic

Within his first day in office, President Joe Biden signed a slew of executive orders to bolster the fight against the pandemic, and make changes from the last administration. Of the 30 executive orders signed so far, 9 of them centered around the battle against COVID-19.

This includes the formation of the COVID-19 Response Coordinator position within the President’s Executive Office. This new leadership position is intended to improve resource distribution throughout the country, structure reopening plans for small businesses and schools and foster productive communication with other government leaders.

In order for leaders to make properly informed decisions, data and information regarding COVID-19 research is needed. In this aspect, President Joe Biden signed an executive order that makes data from COVID-19 research more accessible. It also aims to enhance data collection within the public health system regarding mortalities, cases and response effectiveness.

The administration has also rejoined the World Health Organization, which may prove to be beneficial in confronting the virus globally.

“We can only fight COVID if we fight it globally. If COVID cannot be pushed back globally it will always come back,” Dr. Kneis said.

This is evident within countries like Brazil or India, which total just under 20 million COVID-19 cases. Smaller countries with less economic stability, diminished medical technology and a lack of supplies can make fighting the pandemic impossible.

Dr. Kneis pointed out that although we are experiencing snags with vaccine distribution in the U.S, other countries may not be so fortunate.

“We all need the vaccine, and even though Western countries have had difficulty getting the vaccine, we will probably be getting more of the vaccine than others. There will be countries left behind in the pandemic,” Dr. Kneis said.

The pain that COVID-19 has inflicted has been felt across the planet, and it will require a global coalition to confront it. The United States, as a global superpower, has the ability and potential to be a major leader in this battle. As Dr. Kneis mentioned, defeating the pandemic abroad will prove monumental in ending the pandemic for good at home.

In 2017, President Trump withdrew from the Paris Climate accord on the premise that it would be economically costly to the U.S economy, and that other countries were not significantly contributing to the project. Many other changes were also made during Trump’s presidency that negatively affected the environment.

Some examples include the deregulation of policies regarding fossil fuel extraction like oil, coal and natural gas. It also lifted regulatory policies like Mercury and Toxic Standards (MATS), which called for the reduction of harmful pollutants like arsenic, mercury and other harmful gases from being emitted.

To say the least, the issue of climate change was not a primary focus within the Trump administration. Like COVID-19, climate change requires the contribution and cooperation of all major and minor powers of the world to combat. With this understanding, President Joe Biden has reinstated the United States back into the Paris Climate Agreement and reversed many of the decisions made by Trump.

The task force is also responsible for cooperating and fostering support within other government bodies  to combat climate change.

This is important when looking at a major weakness in past presidencies that have been reliant on executive actions instead of legislation.

According to Dr.Philipp Kneis, “One of the problems in the last few years, both from the Obama and Trump administration, was the use of executive action instead of actual legislation. Executive actions don’t have the same power.”

The passing of actual legislation will help sustain the fight against climate change  long term. It also allows the potential of the entire government system to be utilized for these efforts on a much greater scale.

Needless to say, the last two months alone have shown to be a terrifyingly time of division in American history. The riot that transpired on January 6th at the capital was an indicator of the nation’s struggling health.

Not only has  the nation faced the trial and tribulations of COVID-19, but has also faced a tumultuous election year, crippling social issues, economic hardships and a list  of other ailments. It should be no surprise that such an event such as the storming of the capitol would have hatched as a result of all this pressure. Yet, it should be understood that those who participated in the raiding of the capitol building are also Americans with their own motives and grievances.

An article in the Washington Post shares some insight regarding the makeup of those in the mob.

“Nearly 60 percent of the people facing charges related to the Capitol riot showed signs of prior money troubles, including bankruptcies, notices of eviction or foreclosure, bad debts, or unpaid taxes over the past two decades… ”

Of those who were convicted, only a few had a history of violent crime.

Of course, this doesn’t justify their actions, but it does help explain the motivating factors behind the riot.

Enduring suffering, hardship and  being ignored can be frustrating. This is further amplified  when political leaders, news pundits and social media outlets perpetuate the division of opinions. People can be egged on by individuals who want to fulfill their own agendas. This happens on both ends of the political spectrum and has manifested across history on multiple occasions.

In response to this, President Joe Biden hammered home the goal of unity within his inaugural speech. He stood up not only for those who helped him into his presidency, but also those who tried to shut him down.

This statement is already reflected within most of his executive actions. Not only are they aimed at being a player on a  global front, these executive actions are  meant to help Americans as a whole. For example, President Biden’s climate approach involves the careful reforming of the fossil fuel industry. This means finding and funding well paying jobs for experienced workers who transition from one industry to the other.

A common theme  in the  research was unity. Unity within the nation, unity in the local community and unity across the borders. The United States is but another nation  on the Earth struggling for its future within space and time. If the country  plans to confront any issue at all, big or small, it requires the efforts of all its people.

As Abraham Lincoln once said, “A house divided against itself cannot stand”.