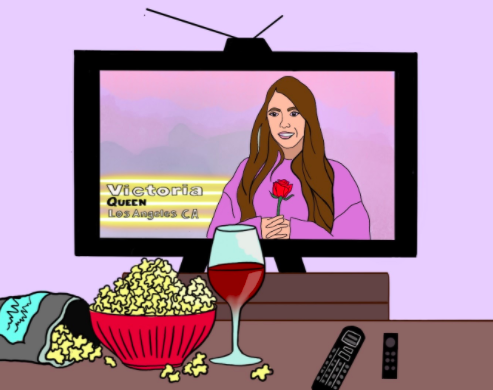 So, you’re mindlessly scrolling through Netflix or Hulu with no clue what to watch. Something serious? A comedy? Try out a new TV show maybe? But, have you considered cringe reality TV?

I myself am a huge fan of the bad-reality-TV genre. It’s the type of TV that makes you cover your eyes out of second-hand embarrassment, yet you find yourself looking through the cracks of your fingers. Can anyone resist watching a social trainwreck? If you’re anything like me, and the millions of others around the world, you know what I’m talking about.

If you’re a newby, buckle up buttercup. I’ve curated a list of the worst yet the best reality shows to binge this fine winter season.

Writer’s Note: all the shows I’ve chosen to highlight have some sort of romantic hue. I’m not going to say they’re “feminine,” they’re just people navigating through the sea of love.

This is a prequel to the actual show, 90 Day Fiance. In these seasons you experience two people who fell in love online. Usually an American and someone from somewhere else in the world. The American will fly to meet them for the first time and test out their love for real. The kicker is usually that the couples try to get engaged during their short visits together.

If this doesn’t scream cringe, then picture the expression on someone’s face when the photos they’ve been receiving for years have been photoshopped to look ten years younger. Maybe that waistline isn’t as tight as you thought it’d be. And talk about language barriers. As you watch, the show reveals all the little lies and insecurities that even the couple themselves can’t see.

Now, 90 Day Fiance comes after. This show features the same couples as they attempt to plan a wedding in 90 days to tie the knot. If they don’t get it done, their partner’s spousal visa expires and they’re on a plane back home.

Are You The One (Netflix)

It seems simple, but imagine you fall in love with Spencer but Jason is actually your match. I know it may seem confusing so to clarify, the producers predetermine your match before the show starts, and none of the singles have any clue. So it’s up to their instincts of who seems right for who before each match-up ceremony. There’s a lot of heartbreak, drunken rampages and displaced sexual tension. A real hoot if you ask me.

This one came out a while ago and was pretty popular, but if you haven’t seen it yet, this is your sign. People always want to believe love is blind–but is it? This show features a group of male and female singles who are separated in different living quarters. Everyday they go into rooms where they can talk to another single from the other quarters, but can never see them.

Eventually, a few of the couples decide they are madly in love and want to marry each other. No, literally they propose to each other after a few weeks of talking without ever seeing one another. Once they agree to get married they have the big reveal where they meet for the first time which is extremely awkward. Soon after, they’re whisked away to a new apartment where they’ll live together while they plan their wedding.

Once the big day comes,  the couple has to decide up at the altar if love truly is blind. I still think about this show because of the sheer  amount of drama that came out of it. Granted. the situation these people are put in is unimaginable.

This is a classic so I had to include it. Most people have at least the knowledge that this show exists, but if you haven’t delved into the culture of it, I’m here to inform you. So, the show is the same, it just switches off. The Bachelor has one man and over 20 women competing for him, and vise versa for the Bachelorette.

Every week, the group competing goes on dates and forms relationships with the bachelor or bachelorette. At the end of every week, some of the competitors are sent home. The show works its way down to a top four, where the Bachelor/Bachelorette meets their families. Then down to the top three where they get the chance to have their first overnight dates together (hint hint wink wink). Then there’s two and the Bachelor is expected to propose to the lucky gal, or the final male contestant proses to the Bachelorette.

There’s a lot of heartbreak in this show. A lot of back stabbing. Passive aggressive female energy and toxic masculinity. It pretty much exacerbates everyone’s worst traits. I mean 20 people dating the same one person is a sh*t show. Even so, give it a whirl. There’s some old seasons on Hulu you can watch in between the live series that alternate throughout the year.

This is exactly what it sounds like. Two people are matched by so-called “specialists” to get married. The first time they meet is at the altar–literally. Obviously, there’s a lot of emotions happening during the marriage ceremony. The couple is freaking out, their families are panicking, emotional chaos. After the two tie the knot, it’s off to the honeymoon.

All the couples married will attend the same resort and interact with each other throughout their vacation. This gives the couples time to get to know each other both physically and mentally. I mean they are married by this point. When they get back, they move in with each other, at either one of their pre-existing residents. After eight weeks, they have the decision to continue their marriage or end it.

It should be mentioned they are legally binding marriages the couples are in. So, no one is messing around here. Just from my description I’m sure you’re already conjuring up the cringe scenarios the couples experience.

Okay, so those are just five of the many reality TV shows that are out there. I could have doubled the size of this list and still not even scratched the surface. Just goes to show you how much we all love watching other people’s lives unfold. Why is that?

I recommend cuddling up with some snacks, your drink of choice and a couple hours of time set aside. These are binge-worthy after all. So, there you go, enjoy your viewing and get ready to pull that blanket over your eyes!