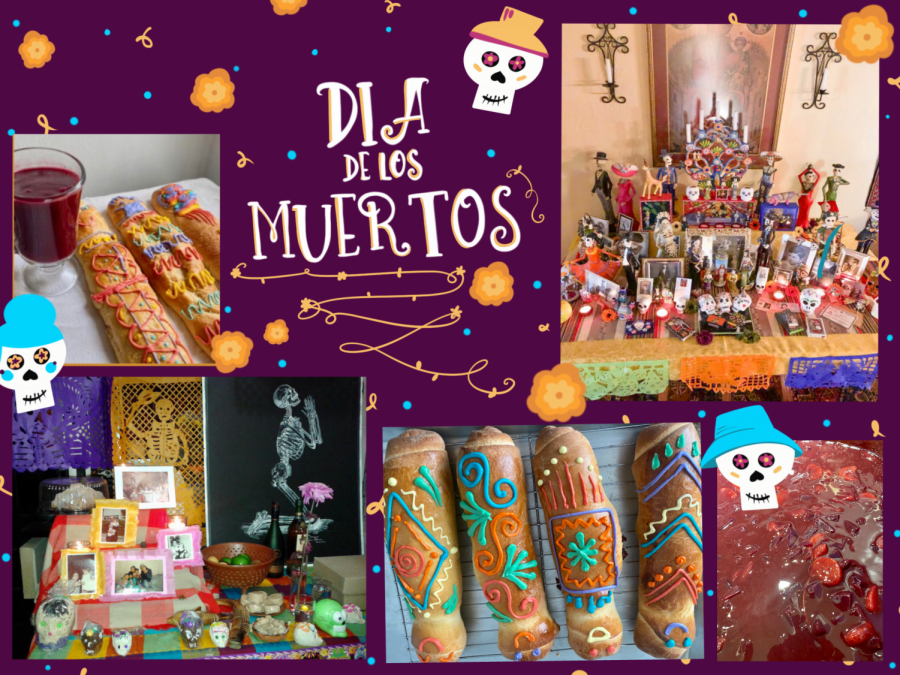 If you have seen “Coco,” the American computer-animated fantasy film produced by Pixar, you probably know that Día de los Muertos is an Indigenous rooted celebration to remember our loved ones that have passed away, but this celebration has a deeper meaning.

José-Antonio Orosco Ph.D., Professor of Philosophy at the School of History, Philosophy, and Religion at Oregon State University, said Día de los Muertos has become very popular in the United States in the last 20 [to] 30 years, with some cities sponsoring parades and events.

“It’s important to remember that Día de los Muertos is rooted in indigenous celebrations of life and is not focused on death, sadness, or dark magic, among of the things I have heard,” Orosco said via email. “It’s a time to remember the interconnection of all life and our obligations to our ancestors and those to whom we will become ancestors.”

On Nov. 1, in most Latinx/Hispanic households, it is celebrated as the Día de todos los Santos which is also known by other names like Día de los inocentes, and Día de los Santos inocentes. This holiday was originally a Cristian holiday where all saints and martyrs were celebrated. The main reason to choose a common day for this holiday was due to the desire to honor the great number of martyrs, especially during the Christian persecution of the emperor Diocletian who was a Roman emperor from 284 to 305, and who massacred millions of people. The day November 1 was chosen to commemorate all of those deaths.

Traditionally in Día de todos los Santos it is tradition that the living family members offer prayers and good deeds to help the souls of their loved ones to peacefully pass to the “other side,” but many people have other beautiful meanings for this celebration.

Dominga Sanchez, a third year graduate student in the School of Civil and Construction Engineering Ph.D. program, said her family celebrates November 1, Día de los inocentes, which they also call Día de Los Angelitos in honor of those innocent children who had to pass on at a young age.

Nov. 2 is the celebration of Día de los Muertos, where people of Latinx/Hispanic roots honor their friends and families who have died by setting up ‘Ofrendas,’ which is an altar with their favorite drinks and food.

Diana Crespo Camacho, a second year Ph.D. student in Language, Equity, and Educational Policy, said she celebrates Día de los Muertos because she believes that it is important to remember family members that have died.

“We always put an ‘Ofrenda’ for our family members that have died. We put colorful ‘papel picado’ that is tissue paper cut with different forms,” Crespo Camacho said via email. “Photos of our loved ones, food and drink, flowers and calaveritas, that are made of sugar or chocolate. We brought the papel picado and calaveritas from Mexico with us.”

“The night before Día de los Muertos we put food and alcohol on the altar for the spirits to enjoy during their visit. When my sister and I were kids we would always make sugar skulls and we would decorate them with glitter and paint,” Camacho said via email. “When I was younger we had big parties where we would invite all of our friends to come celebrate with mariachis and traditional food.”

Veronica Bedon, who studied at the Central University of Ecuador in Quito said she uses the term Día de los Difuntos, which means Day of the Deceased instead of Día de los Muertos.

“My father is from another part of Ecuador, the city of Ibarra and I remember one year we went to celebrate with my grandparents Día de los Difuntos, and we stop in small towns, and the celebration is more colorful, people goes to the cemetery and bring food to eat with their relatives close to the graveyards,” Bedon said via email. “They left some food there for the spirits, Indigenous people keep their traditions more close to the original meaning.”

In an email, Professor Orosco said some people think that Día de los Muertos is like the Mexican version of Halloween, which it is not. Halloween itself is a holiday from the United States of American which is rooted in much older pagan traditions going back to indigenous peoples in Ireland, Scotland, and Wales.

“Día de los Muertos, as it is celebrated in Mexico, is rooted in very old indigenous traditions of the Mexica, Chichimeca, Maya, Tolteca, and Purepecha peoples, among many others. The Mexica people, who we might be familiar with as the Aztecs, had month-long celebrations to honor their dead ancestors in what corresponds to our months of August and September,” Orosco said via email. “Many of their practices of worship, such as providing food, drink, and the cempazuchitl flowers, [also known as] marigolds, for the dead, remain today as part of the holiday. When the Spanish came after 1521, many of these practices found their way into the celebration of Allhallowtide, [also known as] All Saints and All Souls [day].”

Professor Orosco said the history is similar to what happened to the pagan peoples in Ireland and the U.K., namely that when Catholicism arrived, many of their spiritual practices about honoring the ancestors got swept into Allhallowtide. When immigrants from those places came to the United States, they brought some of those traditions and the U.S. habitants got Halloween out of it.

While all the history behind Día de los Muertos has a different meaning than the initial intent, how many people find in Día de los Muertos as a special celebration to stay connected with their roots, and the comfort of their family traditions.

“I know Día de los Muertos keeps me connected with my roots! My family has been in the U.S. for many generations, at times I have felt a disconnect to my Mexican heritage but each year Día de los Muertos is a reminder of who I am and where I came from,” Camacho said via email. “It is always a pleasure getting to honor the family who has passed and sacrificed so much so that the coming generations could have better lives.”

In an email, Sanchez said that she has Zapotec indigenous roots and that her parents were born in the beautiful state of Oaxaca, Mexico. She said she is the first generation child born in the U.S., California.

“Celebrating Día de los Muertos connects me to more than my roots. It connects me to my ancestors. This is as close as I can get to Oaxaca,” Sanchez said via email. “I have only celebrated Día de los Muertos once in Oaxaca and it was a truly amazing experience, very different [from] what is advertised in social meDía. It is very spiritual, intimate, and like a family reunion.”

Professor Orosco said when he first really learned about Día de los Muertos was when he was teaching in Morelia, Michoacan, Mexico many years ago as part of a study abroad program.

“One of our program’s excursions was to go to the villages surrounding Lake Patzcuaro during the Día de los Muertos celebration. We spent the evening with many different indigenous families as they waited for the spirits of their ancestors and loved ones to return to the cemeteries, which were brightly decorated with candles, altars, and flowers,” Orosco said via email. “It was a very special event and I was grateful to be able to share the evening with people when they welcome their family members back to this plane of existence.”

In conclusion, celebrating Día de los Muertos has helped many people in the U.S. to stay connected to their roots and remember their loved ones that have passed away. Regardless of how the traditions have changed since it first was created, what is important is how this celebration helps people feel connected with their loved ones.