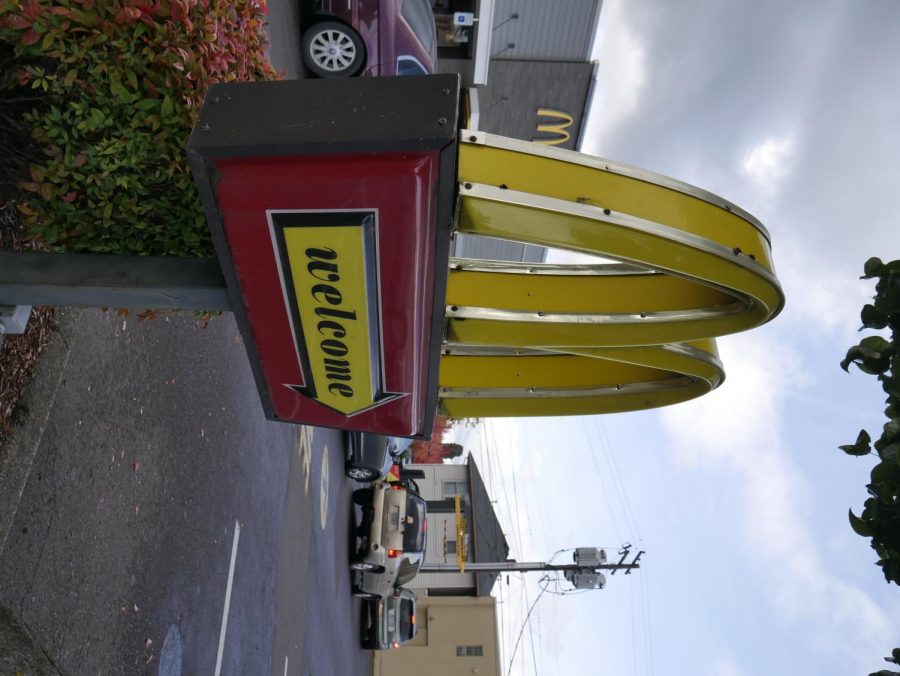 The McDonald’s welcome sign leading customers to the drive-thru entrance. McDonald’s drive-thru is known to occasionally be backed up into traffic at its NW Third St location due to its high popularity.

Whether it is sitting around a dining table during a holiday meal or getting a quick bite to eat on a road trip, food is the center of our world. So what does food symbolize for this generation of Americans?

When asked the question, “What is American food?” a multitude of responses will arise. It depends on where someone lives in the country, what generation they are in, and even what social class they are in.

One thing that all Americans can agree on, however, is the fast food industry has played a huge role in what the world considers to be American food. The most well known global fast food phenomenon was started right here in the United States of America, the infamous McDonald’s.

McDonald’s began in 1948, by brothers Maurice and Richard McDonald. Their main focus started with only burgers, fries and shakes but beat out their competition by selling them for half the price and in half the time.

This was the start of a new hamburger joint era. It changed the way people perceived food and going out to eat because without having to rely on a waiter or waitress, this was an easy self-served operation. The McDonald brothers had no idea their little burger shack was going to turn into what we now know as the modern day fast food industry.

In some eyes, the brothers were geniuses. In other eyes, the brothers corrupted the American cuisine forever. Back in the 1950s, this idea of “fast food” was the promise of the future and how we eat. American’s work harder and for longer hours than any other country. This fast-paced, quickly accessible food industry was the perfect creation for America’s high-stressed work habits. It has grown into more than just a food chain, but as an incorporation into the American lifestyle.

Americans like to think that it is only the lower class who eats fast food. However, “popular thinking has been that low-income people eat more fast food because it’s cheap, but studies don’t bear that out,” said Sarah Cunningham, professor of Anthropology at Oregon State University. In fact, it has become such an adopted lifestyle that it is the majority of the American population who purchase this fast food and who keep this industry alive.

This booming industry has grown from what the McDonald brothers created to a negatively viewed stereotype of American food. Americans have struggled with obesity for years now, and although fast food is not the sole reason for this, it is a strong indicator. With other restaurants following the same trend of McDonalds, like Chick-fil-A and Burger King, the fast food industry has become more predominant than most other food chains.

From an inside perspective of one of the most popular fast food chains, she describes how her experience at In-N-Out was better than the typical fast food restaurant, with higher pay and even employee benefits.

The demand that these fast food industries are asking of their employees versus the gratitude they actually receive are slim to none. Although the fast food industry’s target market is low quality food for a low price, if an employee’s only source of income is from working long shifts at a fast food restaurant, then it would make it nearly impossible to build a good life for themselves and their families in America.

The fast food industry is just one small segment of what Americans eat on a daily basis. If 100 Americans were asked what their idea of “American food” is, you’d most likely get a variety of 100 different answers. Most will probably be associated with fast food in one way or another, but others have grown up living completely different lifestyles in diverse cultures around the country.

“Well, I grew up with my mom making meat and potatoes, varying forms of meat, there was always dessert, there was always milk and cereal for breakfast, said Robyn Jones, Director of Food Service & Marketing at OSU. “That was the norm. Now, I don’t think there is a norm.”