Art: The Language of American History 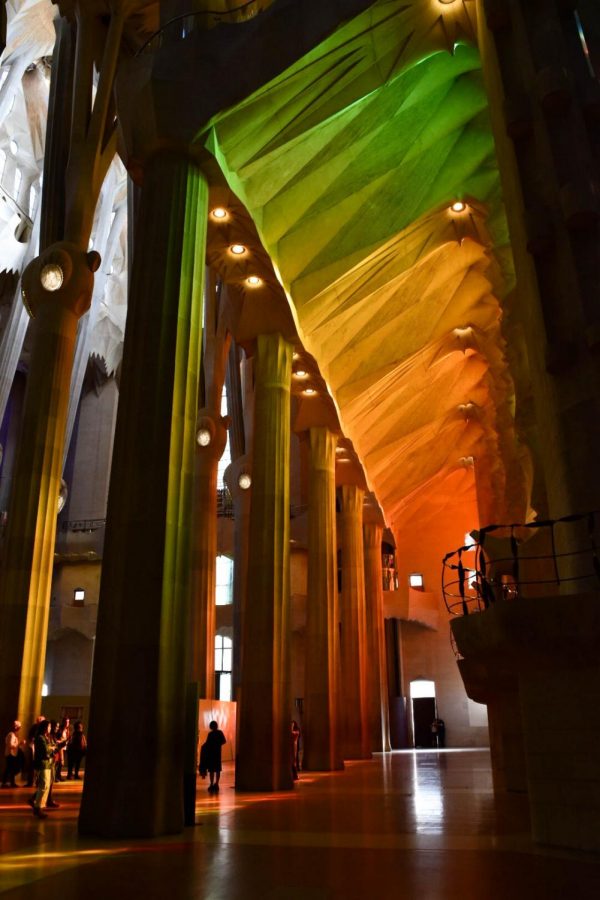 La Sagrada Família stands as one of Gaudí’s most famous works in Barcelona, Spain. The unfinished Roman Catholic minor basilica has been in construction since 1882, with plans of completion in 2026.

Ever since the conception of the United States of America, there has always been art. Not only has art changed throughout history, but it has adapted into different forms over the course of American history in order to align itself with current events.

Art is a tool for many individuals to express themselves in order to portray different emotions, takes on current events, or even different thoughts.

As Danielie Di Lodovico, professor of Art History, said over email, “usually in art, the evolution of artistic language (which is not a matter of better or worse just “different”) can be seen as a step ahead from the past or a complete fracture.” Through the process of time, we got to see a real evolution, a change based off of systematic changes.

Before there were any colonies on the continent, Native Americans were predominant among the landscape. The art they produced was primarily geometric, and depicted tales of myth. Though they predated all other colonization, this art form is still as beautiful and relevant as it was hundreds of years ago.

Once the pilgrims found their way to the Americas, their art came with. Dark, grim, and full of spirituality, the pilgrims used art to convey what they thought of the world. Nature was viewed as an embodiment of something outside of God’s grace. Humans were created in the image of God, and nature wasn’t, so they decided to avoid it at all costs.

As time went on, different values, governmental systems and ideas came and went. Nature, which was originally viewed as evil, was now becoming a centerpiece of attention to many American artists. In the 1850’s, art movements such as the Luminism movement crafted a new perspective on nature.

Instead of being cruel and nasty, this new outlook illustrated the wilderness as a place to explore. Luminism changed the idea of the outdoors for Americans and helped in the creation of an American mindset based on the wilderness.

During the 1870’s, Tonalism became a common art practice, basing itself on mythology and spirituality. This new theme  often required dramatic pieces of paintings or murals. Americans, on the other hand, found a new way to express dark, dramatic emotions following the civil war. It was now popular to create with darker undertones to portray American citizens’ perspective of the country at that time.

The 1880’s brought in new art that focused mostly on human life and society rather than the outdoors or specific landscapes. Being influenced by French impressionists, American artists crafted a new style of painting that obviously envied high life society. These paintings were vivid, and included human focuses, mainly families or mothers.

Even though photography was becoming a more popular form of art during the late 1800’s and early 1900’s, paintings and different forms didn’t disappear. 1912 introduced a new form of painting that has never been seen by Americans, Synchronism. Synchronism performed visual musicals via bright colors and shapes. This new form of abstract art made it look like you could reach out and touch your favorite song.

The 1920’s was called the Harlem Renaissance, a period where jazz and African American artists were starting to be put into the spotlight. This art focused on the celebration of African culture, diversity and pronounced the culture emerging  from the Harlem neighborhood in New York.

Social Realism was born in the 1930’s which focused on working class people in America. Art shifted away from beauty and began to portray real-time events working as a way to bring the nation together. This movement was especially impactful  due to World War II, and the amount of jobs that the war produced. Laborers were an important part of American culture when many other people were dispatched in different areas around the Earth.

Next is American Expressionism that started in 1943. During this time period, artists found motivation and astonishment in the idea of automatism, a study on human behavior. Artists were trying to depict the human unconsciousness, which usually surmounted in a lot of different colors and patterns. They would achieve this by illustrating their inanimate emotions with abstract pieces of art.  This kind of art never portrayed cemented objects, yet it was still able to evoke human emotions.

The final major art movement is the minimal era, which began in the 1960’s and has lasted up until the current day. In minimalism, artists try to say as much as they can with as little as possible. In other words, minimalism introduced the idea of simplicity, and the idea that simple things can evoke more thought or emotion rather than large, picturesque types of art.

Today, art has no boundaries, no walls or locks to burden it. Whatever form that it is decided to exist as, expression is the only thing that matters. Expression has a critical role in society, and it has the power to change those who experience it.