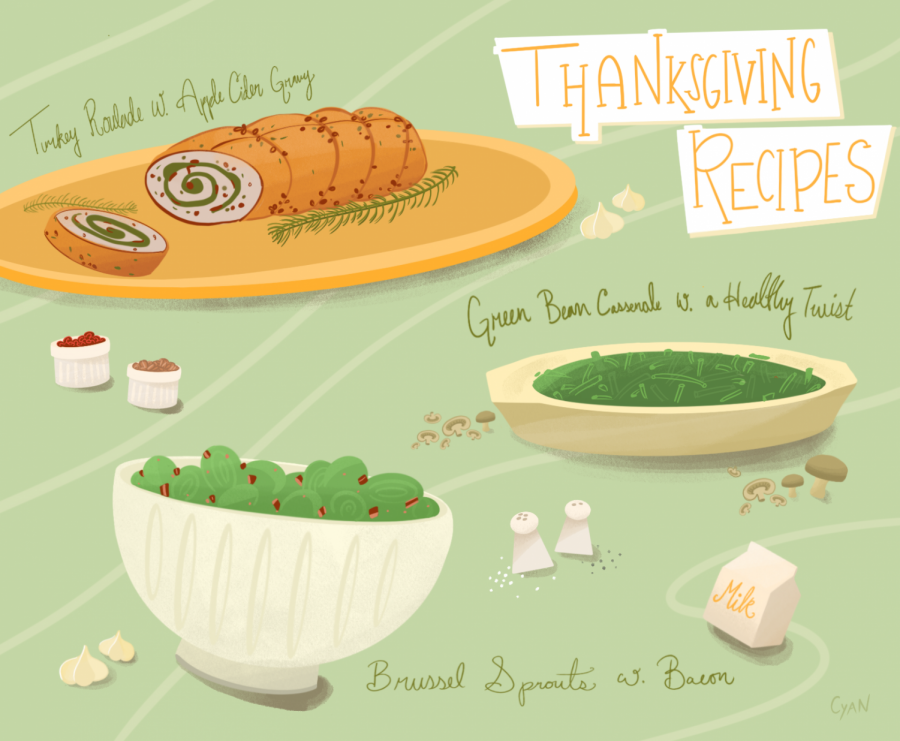 As college students or anyone on a budget, creating a meal for the holidays can seem overwhelming. But no need to fret for any longer because these recipes are easy, inexpensive and even healthy too!

From the fun twist on a simple turkey to the delicious crispy Brussels sprouts all the way to the healthy green bean casserole, you can have a full course meal but without the guilt. Don’t break the bank or the diet this year, and have fun with these remarkable recipes.

To start out this Thanksgiving day feat, we have our main course: turkey. This turkey plate, however, has a bit of a fun twist. Start by preheating the oven to 375 degrees. Next, place the turkey breasts between two sheets of plastic wrap and pound lighty with a meat mallet or similar utensil. This will get the breasts to an even thickness of about ¾ inches. Set these breasts aside and begin on the stuffing.

Place the dried cranberries in a small saucepan and cover with water. Cook for one minute after bringing them to a boil. Then remove from the heat, drain and then set aside. Heat two teaspoons of oil in a large skillet over medium heat and add in the diced onions.

Cook until onions are golden brown, stirring occasionally. Add in the garlic and cook an additional two minutes. Add bread, cranberries, pecans, two teaspoons of dried sage and ½ cup chicken stock. Cook for about three minutes and then remove from heat.

Next, salt and pepper the inside and outside of the turkey breasts from before. Spread the stuffing mixture on the turkey, leaving about two inches uncovered on all sides. Roll up and secure tightly with either kitchen twine or floss making sure to keep all stuffing intact.

Heat one tablespoon of canola oil in a medium-sized roasting pan until hot. Sear stuffed turkey breast on all sides until lightly browned which is about three minutes on each side. Add sliced onion and 1 ½ cups chicken stock, cover tightly and roast in the oven for about an hour. Remove the turkey from the oven and transfer to a cutting board.

To make the gravy, add apple cider, ½ cup chicken stock, vinegar and remaining sage to the onions, chicken stock and juices in the roasting pan. Bring to a boil and cook for about 10 minutes. Slowly add the cornstarch mixture, stir occasionally and cook for three more minutes. Season with salt and pepper. Remove the twin from the turkey and slice into one and a half pinwheel pieces. Serve with the gravy mixture, and enjoy!

Preheat the oven to 375 degrees. Heat the olive oil in a small skillet over medium to high heat until hot but not steaming. Add ¼ cup shallots and cook for about two minutes or until golden brown and crisp.

Transfer to a paper towel and drain, repeat with the remaining shallots using only ¼ cup at a time. Save the oil in the skillet. Then place the green beans in a steamer basket fitted over a pot of boiling water. Cover and steam until crisp, about three minutes.

Heat one tablespoon of the saved shallot oil in a large nonstick skillet over medium to high heat. Add the mushrooms and cook for about 12 minutes or until the mushroom liquid is gone and they start to brown. Add the garlic and thyme in and then cook for one more minute.

Transfer the mushroom mixture to a bowl and whisk together the milk and flour until the flour is dissolved. Add the mixture to a skillet, whisk constantly and bring to a simmer. Reduce the heat to medium while whisking occasionally for about 12 minutes or until thickened.

Remove the pan from the heat and stir in the green beans, mushroom mixture, ⅓ cup parmesan cheese, the parsley, nutmeg, salt and pepper. Spray a baking dish with cooking spray and spoon the green bean mixture into it. Sprinkle the top with crispy shallots and the remaining two tablespoons of cheese. Bake for about 20 minutes, or until the top is golden brown.

While cooking the Brussels sprouts, put the oil and bacon in a large skillet and cook over medium heat, stirring occasionally until the bacon is crispy. Remove the bacon and set aside. Turn up the head to medium-high and add the brussels sprouts. Cook for about ten minutes, or until browned and the edges are crisp. Stir in the vinegar, salt, pepper and bacon. Then serve, and enjoy.