Star Wars and Chill 2: The Mandalorian and Disney+ One Year Later 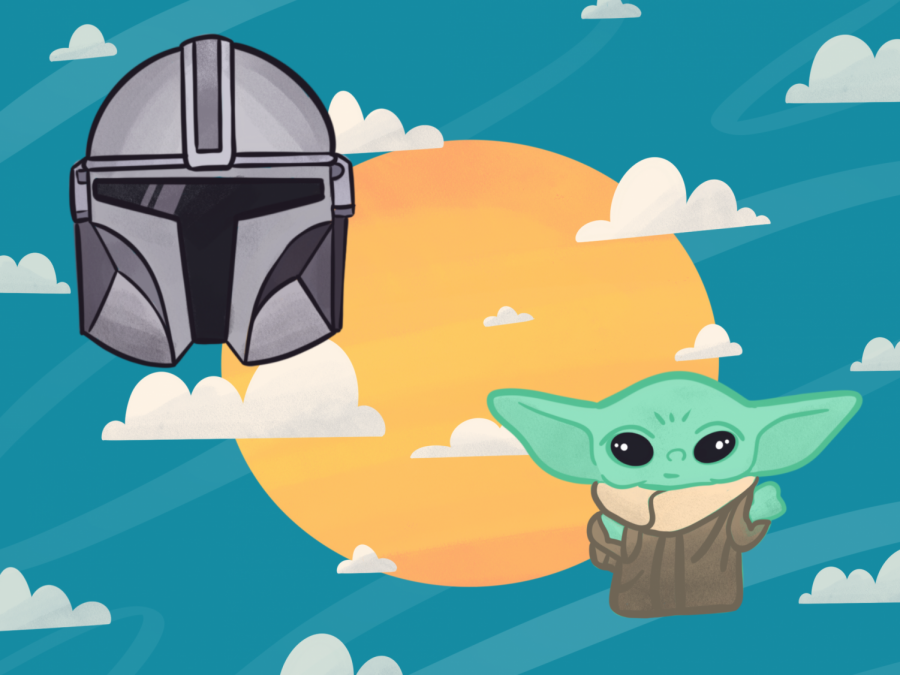 On October 30th, The Mandalorian returned for its season two premiere exclusively on Disney+. Like the first season, season two will consist of eight 30-45 minute episodes released on a weekly basis.

If you haven’t watched season one yet, consider this your spoiler warning. If you don’t want to know anything about the first or second season before viewing– get out of here now.

Hot off his escape from Imperial loyalists, Pedro Pascal’s Mando’s new goal is to reunite The Child, whom the internet quickly dubbed “Baby Yoda,” with others of its kind. But to do that, he needs to find others of his own kind. His hunt starts on a familiar desert planet. Who could he be searching for? If you’re an Original Trilogy fan, you’ll probably figure it out pretty quickly.

Unlike season one, season two’s premiere, The Marshal, doesn’t immediately dive into the season’s main plot, instead opting to set up threads that promise to connect The Mandalorian to the larger Star Wars universe.

Alongside Pascal, Gina Carano, Carl Weathers and Giancarlo Esposito will be reprising their roles as Cara Dune, Greef Karga, and Moff Gideon, respectively. Additionally, there are reports of some new castings that promise to shake up the show this year.

Temuera Morrison, Rosario Dawson and Katee Sackhoff were all reportedly cast for season two last spring, which is interesting because Morrison and Sackhoff have both played Star Wars characters before.

In Attack of the Clones, Morrison played the bounty hunter Jango Fett, the Mandalorian who agreed to be the template for the Republic’s clone army. Though Jango was decapitated, Morrison could realistically show up as any surviving clone, such as Boba Fett or Captain Rex, or both.

How these legacy characters will fit into the story is anyone’s guess, but I’m stoked to see what Dave Filoni and Jon Favreau have in store for us. The action is top-notch and the last-second reveal promised even bigger and better surprises than last year. Another two thumbs up.

In last year’s review, I recommended a Netflix subscription over a Disney+ subscription unless you’re a die-hard Disney fan. This was mainly due to the lack of original content on Disney+, and now that we’re a year into the launch it’s worth re-evaluating.

In 2019, the future looked bright for Disney+. Season one of The Mandalorian was a smash hit and there was a heap of Marvel content on the way. Man, what a time to be alive. Then… well, we all know what happened next.

Marvel’s release schedule for Phase 4 of the Marvel Cinematic Universe had several original shows that were supposed to launch over the last year as the bulk of their first-year content. Falcon and the Winter Soldier was slated for August 2020, WandaVision and Loki for Spring 2021, What If…? for Summer 2021 and Hawkeye for Fall 2021.

Now, WandaVision is the only show still releasing in 2020. That status of the other shows is unknown, as most had to shut down production back in March.

So what do we have for new original content? Well,aside from Star Wars content and documentaries, the lineup is honestly pathetic. Disney released Diary of a Future President last January, which I’ve never heard of. Hamilton also came out last summer, but that’s it, after a year. Two thumbs down.

As I said last year, Disney+ is by no means a bad service, if you’re into Disney then the legacy content is all you’ll ever need. But if you’re like me and are planning on canceling your subscription when The Mandalorian ends, there’s just not enough to keep me around long term. Maybe that will change in another year–maybe it won’t.

The Mandalorian streams new episodes every Friday on Disney+