How to horrify yourself with these Halloween movies 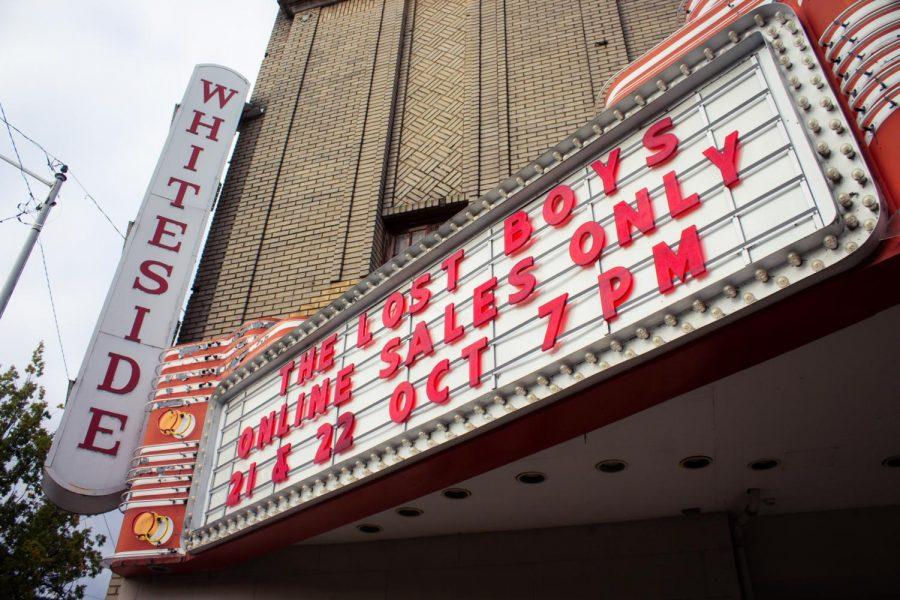 As Halloween gets closer and the weather begins to cool down, dropping by the Whiteside Theater for a spooky movie showing might be the perfect way to spend an October night.

Alright everyone– let’s get spooky. October is known for a lot of things: the change of seasons, beautiful fall leaves, blustery afternoons, spiderwebs, pumpkins, skeletons, pumpkins, graveyards, pumpkins. Okay you get what I’m saying– it’s Halloween!

Personally Halloween is my favorite holiday, contrary to most people I would assume. It isn’t just about Halloween though, it’s the beautiful weather and the feeling of a brisk morning after months of summer heat. It’s the leaves crunching beneath your feet. The foreshadowing of the upcoming trick-or-treat. And of course, the movies.

I’m going to provide you with a guide to the perfect spooky night in. Both classic and contemporary films that will for sure make those bones shake. Here we go:

All these films are must watchers. These are the movies that defined the horror/Halloween genre and the stories that have stood the test of time.

If you haven’t seen this movie, it’s a little bit of a comedy mixed in with scary. A deceased couple come back as ghosts to haunt their old house. In the mix though is the iconic protagonist, Beetlejuice, who would never be caught dead without his striped black and white suit. A classic for sure.

Okay this one is personally one of my favorites, not only because Edwards is played by Johnny Dep, but because of the forbidden love. The title says it all, the main character, Edward, has scissors for hands. Obviously this is a hindrance for him but he ends up being really good at cutting hair and a young little thing falls in love with him. Put this one at the top of your list.

Okay the first two movies here aren’t really that scary, so let’s step it up a notch. Carrie is a Stephen King novel adaptation following a young girl who goes crazy. At prom. There’s blood, demons, horrific incidents. I won’t say too much here, but definitely holds up at one of the creepiest classic teen horrors.

This. Is. A. Classic. It’s also the longest running theatrical release that so happens to be associated with Halloween. I don’t have anything else to say here, just watch it. Well not about the film I don’t, but I should mention there is a cult following the production. I’m talking obsession. Conventions that last days, scripted audience responses to the performers on stage, an international fan group, a publication, the list goes on. If this doesn’t convince you then I don’t know what will.

I couldn’t sleep for a few nights after watching this one when I was younger. Honestly, it was sort of revolutionary for its time as well. A young girl is violently possessed by a demon and her mother hires a man of faith to help get it out of her by, you guessed it, an exorcism. Don’t call yourself a Halloween true fan until you’ve given this one a spin. Don’t watch it alone that’s for sure.

I’m not going to lie, I’m going to suggest some pretty scary content here. What I’m trying to say is if these aren’t usually your jam you should still totally watch them. Just with a friend. Or five.

There’s actually three of these in the series following a remake of a Japanese horror film, Ju-On: The Grudge. For the purpose of this though let’s just stick with the first one. The plot centers around a curse that is passed onto its victims upon death and sort of repeats itself all over again. What makes it scary though is the entity that the curse resides in. A twisted, inhuman young girl whose body moves in ways that should never happen. This one made me cover my eyes in horror so get ready for that.

I know this one was released in ‘99, but I consider it a contemporary horror. In simple terms, a group of three film students go out into the middle of the woods to hopefully capture footage of the fabled Blair Witch. As you can imagine the mission goes rogue and the three spend their time in the woods enduring what I’d consider close to hell. This movie pioneered found-footage horror. Meaning all the tapes were found after the fact…

I’m guessing some of you have already seen this one, but it’s really good so i’m including it. In a nutshell, the world is invaded by these creatures. If you make absolutely any noise they will immediately find you and kill you. The family the movie follows are some of the survivors. They live in complete silence, sign language, walking on sand, etc. The mother is pregnant as well so that’s something they’re continuously planning for. I cried like a baby at the end of this one. Not for the faint of heart.

I personally haven’t seen this movie because I’m too afraid to watch it. It’s that bad. The plot follows a family, specifically a young girl named Charlie. She is accidentally decapitated during a car mishap but her spirit is far from leaving the earth. The rest of the movie is a series of events and images that you’d wish you never saw, even judging by the trailer I watched. Definitely on the paranormal side of horror, so pick your poison with this one.

Okay contrary to the film above I’ve seen this one twice. It’s a film, but it’s almost art. I know that sounds cheesy and I’m no film critic, but the way the producers chose to film and execute the imagery is quite interesting. Besides that, the actual movie is pretty chaotic, in a giant closet monster demon sort of way. 10/10 this movie is a must watch, it’s both hands over your eyes scary and mind questioningly weird.

Okay everyone, that about wraps up my list for you all! I want to note that I by no means have any idea what constitutes a good movie from a bad one. What I do know is that Halloween is my expertise and these are all movies that I frequent year after year. I think there’s a pick in here for everyone whether you like comedy-scary, dorky-scary, mystery-scary, scary-scary and all other niches that makes up the beautiful genre of spooky.

Remember, we’re only a couple weeks away from Halloween so make time to enjoy the season. Though I may admit, all of these can be enjoyed year-round if you’re a true horror fan.

Editor’s Note: Your lovely editors of Beaver’s Digest would also like to include an unconventional movie– Zombeavers. This is a comedy at best following a group of college students who go out to a cabin to have a good time before being surrounded and attacked by zombie beavers. That’s it. That’s the whole plot. If you’re a satire junky, then this is your film. Have fun kids.