How to connect while socially distant in the dorms 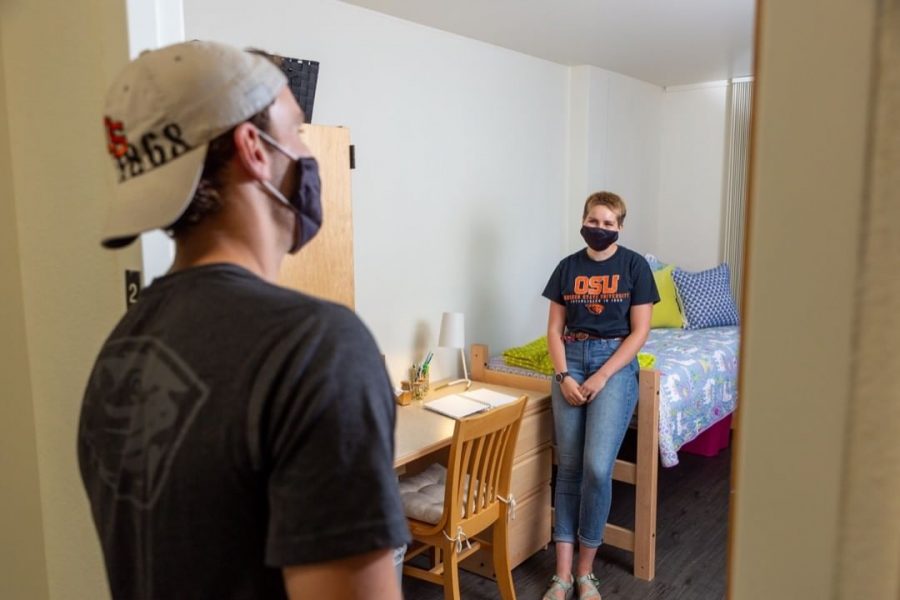 Two students wearing masks chat safely while socially distant in the dorms at the beginning of fall term.

Here we are, fall term in the year 2020. We all collectively hoped remote classes would be a thing of the past by now, but you know what they say, you can’t always get what you want.

This term, however, presents a new kerfuffle: freshmen moving into the dorms. The dorms are supposed to be a great big melting pot of new people to meet, but how’s that possible when you’re expected to stay isolated all term? While it’s no substitute for real human interaction, here are five virtual ways to break the ice with the people in your dorm.

A dorm classic, card games are easy for anybody to pick up and play, and there’s no real player cap, so the more the merrier! Card games are also one of the easiest games to virtually recreate, so there are tons of apps for you to play your favorite card games on, such as Tabletop Simulator or Poker Stars. Some games that are guaranteed to draw a decent group are Uno, poker, or Cards Against Humanity.

Mafia is a tabletop game of deception and trickery that you play in a group. The basic idea is there are two sides: town and mafia. The object of the game varies depending on what side you’re on. Mafia members know the identity of other mafia members, and town members are unaware of anybody else’s identity. It’s up to the mafia to eliminate the town without revealing themselves, and it’s up to the town to use logic and reasoning to reveal the mafia before it’s too late.

There are several games that use the mafia formula, such as Town of Salem, Secret Hitler, and the video game variant, Among Us. The tabletop versions are easy enough to be played via Zoom, and Among Us is $5 on Steam and free on mobile devices.

While gathering in the dorm lounge for a movie night is a no-no this term, you can still organize a viewing party with relative ease. Discord, a popular free desktop communication platform, allows you to easily share what’s on your screen with everybody else in the call without having to install extra screencap software. This allows you to stream directly from Netflix, Hulu, HBO Max, and other streaming services. The notable exception is Disney+, which will show only a black screen when streamed to a Discord call.

Party games are video games that are made to be played with a group. Think Smash Bros, Mario Kart, or Wii Sports. While couch party games like these will likely be frowned upon in the dorms, there are online variants that are just as entertaining.

Fall Guys is a game where you race through a Wipeout-esque series of obstacle courses until you’re the last one standing. Golf With Your Friends is a wacky mini-golf game with heaps of courses and customization options. Finally, Worms Battleground is a physics-based game that pits your squad of cartoon worms against your friends’ squads with one goal: use a host of zany gadgets to knock the other worms off the map.

All three of these games are available on Steam for $20 or less and take very little processing power, so all you need to play is a laptop and an internet connection.

One of the best ways to make friends in the dorms is traditionally one of the easiest: simply leave your door open when you’re inside. Unfortunately, like so many other things, COVID-19 ruined that too. But you can still connect with the people on your floor by getting everyone in on a group chat. I’ve found that Facebook Messenger works pretty well to facilitate larger groups, but there are several platforms that would work just as well, like Snapchat or Instagram.

Although it’s not the term we wanted, it’s the term we’ve been dealt and it’s important to make the most of it. This is the beginning of one of the most exciting periods of your life, with a little patience and perseverance we’ll all be able to return to normal soon enough. Until then, stay safe and stay healthy.