How you can support Black Lives Matter 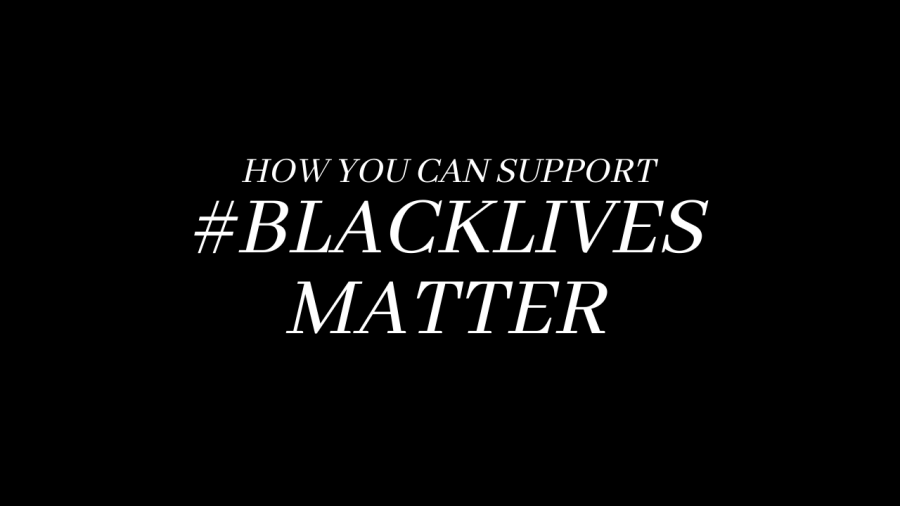 “On June 7th, 2019, Emerald Black a pregnant, black woman, and her fiance were pulled over by police officers after coming from a doctors appointment. The reason for being pulled over was for bad registration tags. The officers spoke to Ms. Black’s fiance while she stayed in the car. The officers began to order her out of the car. Ms. Black was clearly pregnant and she had let them know  that she had just gotten back from a doctors appointment where she was also  informed that she was at a high risk for a miscarriage. Despite this, the officers yanked Ms. Black, still in her hospital clothes, and threw her to the ground. They taunted her, piled on top of her, and stomped on her stomach causing her to miscarry.”

“Tony McDade was a transgender black man who got killed by police in Tallahassee. As of right now I haven’t seen many people talking about this, but I would really like to get his name out there. It would be very appreciated if you could sign this petition and encourage others to do so as well.”

“The George Floyd Act is a proposition for law reform confronting police education, training, procedures, evaluations, and human rights. It is a proposition to protect all people and our community against prejudice, racism, and police brutality.”

“When Julius Jones was 19-years-old, he was convicted of a murder he says he did not commit. I need your help to save his life.

Julius has lived on death row for almost 20 years, and is held in solitary confinement for 23 hours a day. He is allowed one hour of sunlight a day, and three showers a week. Every minute we wait to take action, Julius is suffering. Every second that goes by brings Julius closer to being executed for a crime he didn’t commit.”

“Using 911 as a personal hotline to remove / harass/ or arrest PoC for, in many cases, living their lives not only wastes police resources, it puts the lives of minorities in danger. While police are responding to fraudulent crimes, real crimes can go unpunished or unsolved, and the resulting lag in police response can result in the loss of life.

When 911 is used to report fraudulent crimes committed by minorities, the offended should be immediately apprehended, jailed, and prosecuted. Only when this behavior is harshly punished will it be curtailed.”

“The Department of Justice has launched independent investigations into police killings of civilians before. Last year, they launched one in response to the killing of John Crawford, who, like Tamir, had a toy gun in his hand while shopping at a Walmart when police rushed in and shot him to death. A Change.org petition helped make that investigation happen and that’s why I need your signature.

Please sign my petition asking the Department of Justice to launch a federal investigation into prosecutor McGinty’s handling of the grand jury process; and for the killing of 12 year old Tamir Rice.”

“We need legislation now that prohibits police officers from shooting unarmed citizens. If there isn’t a weapon found after someone has been shot (therefore, unarmed) by a police officer, then I propose that the officer should receive a mandatory 15-year prison sentence.

We have seen over and over police officers get off, even with videotape footage of citizens having been shot by police officers. This is a new form of lynching. I am pleading with you to propose a bill that protects people who have every right to feel threatened by law enforcement.”

“David McAtee was shot and killed by the LMPD and the National Guard just after midnight local time on June 1st at his BBQ stand on the corner of 26th & Broadway in Louisville, Kentucky. He was unarmed when he was shot and his body was left in the street for more than 12 hours after the incident occurred. Those who knew McAtee attested that he was an amazing man and volunteered his time giving meals to his community.”

“George Floyd was murdered by a Minneapolis police officer. We are trying to reach the attention of Mayor Jacob Frey and DA Mike Freeman to beg to have the officers involved in this disgusting situation fired and for charges to be filed immediately.”

“These were the last words of George Floyd, a 46-year-old Minnesota man, a beloved friend, brother, and coworker. Floyd, a black man, died on May 25th, 2020, at the hands of police officer Derek Chauvin, a white officer who used his knee to pin Floyd’s throat to the ground, choking him beyond motionlessness for over eight minutes, despite Floyd’s cooperation and desperate pleas to live. Three other officers — Tou Thao and two unidentified officers — backed Chauvin up and held Floyd down while bystanders screamed, filmed, and begged the officers for mercy on behalf of Floyd, to no avail.”

The Action Pac: Stand with Breonna

“Breonna was asleep at home when a rogue task-force of the Louisville police broke down her door in the middle of the night and murdered her. They were attempting an illegal drug raid in the wrong neighborhood for a suspect that they’d already arrested earlier that day.

We’re calling on the Louisville Metro Police Department to terminate the police involved, and for a special prosecutor to be appointed to bring forward charges against the officers and oversee all parts of this case.”

“We call for an end to the systemic racism that allows this culture of corruption to go unchecked and our lives to be taken.

We call for a national defunding of police. We demand investment in our communities and the resources to ensure Black people not only survive, but thrive. If you’re with us, add your name to the petition right now and help us spread the word.”

“We are losing our friends, family, and neighbors at unprecedented and disproportionate rates as COVID-19 tears through our communities.

We will be hit the hardest.

In order to protect ourselves and those we love, we need the government to collect and release demographic data on the coronavirus. Also, the CDC must aggregate and release data to provide the Black community with information and resources targeted to our needs.”

Demand appointment of an independent special prosecutor to lead the federal government’s full and impartial investigation of the murder of George Floyd.

Demand reinstitution by the Department of Justice of consent decrees on police departments and municipal governments across this country that have demonstrated patterns of racism towards and mistreatment of people of color.

“We are a small organization with a modest beginning, and an abundance of passion from the volunteers who help us do our work. We are working around the clock to ensure community members and advocates for justice are released from custody, and we will continue to work non-stop to ensure freedom for our communities from both pretrial and immigration detention. We invite you to follow our Facebook page and check our website to stay informed about emerging opportunities to help the Minnesota Freedom Fund. We encourage people to donate to local Black and BIPOC-led organizing work in Minnesota and beyond.”

“On February 23, 2020, 25 year-old Ahmaud Arbery was chased and gunned down by Travis McMichael, son of retired Brunswick investigator Greg McMichael, under the father’s and son’s pretenses of witnessing a burglary in Satilla Shores of Glynn County.

McMichael’s account of the deadly encounter with Arbery was not released until nearly 6 weeks following the shooting.”

“We are calling for the disbarment of prosecutor George E. Barnhill. We feel his decision to sit on the case of Ahmaud Arbery’s murder for three months was out of prejudice/racism and a personal relationship with the murderers.

We need to feel like there is JUSTICE in the justice system and not based on racism, prejudice, or personal feelings. Mr. Barnhill displayed a clear case of not being able to disconnect himself from this case and look at the clear cut facts involved.”

“The General Defense Committe Local 1 in Portland, Oregon, has established a fundraiser to cover bail and other legal expenses for protesters arrested in Portland, Oregon in connection to protests against George Floyd’s murder by Minneapolis police, along with general police brutality. At last count, more than 14 protestors were arrested. We expect that number to rise — processing appears to be unusually slow at the Multnomah County Justice Center.”

“Derek M Chauvin is a Minneapolis police officer who killed George Floyd on Memorial day. May 25, 2020. The chokehold he used isn’t even legal in MMA, because it can kill someone in minutes. He has done this so many times against Latinos, Native Americans, and Black people. In 2008 he shot an unarmed Black man, he was one of the officers that helped MURDER Wayne Reyes, a Latino man, with sixteen bullets.

In light of the news right now, it has been confirmed that Derek has bail. At a very low, 500k. In this update I want to add that Derek does not deserve any bail whatsoever, as well as the original petition‐ he should be charged with first degree murder.”

Fundraisers for black-owned small businesses that were damaged in protests, you can donate to:

Black-owned businesses you can support:

People of Colour Clothing, Corvallis, OR

“People of Colour Clothing aims to educate, generate conversation, and create opportunities for people to examine their conscious behavior on topics primarily related to racial identity, racism, and discrimination. By wearing P.O.C.C., one is able to embrace their racial identity while bringing attention to underlying social factors and discrimination that people of color face every day.”

Body of Health Chiropractic and Wellness Center, Corvallis, OR

Support Black-Owned Restaurants in Portland, OR

Black-Owned Restaurants/Cafes/Markets in Portland, OR

“Founded in January 2015, Corvallis SURJ is committed to developing cross-class alliances among white people in Benton County. Our goal is to act in solidarity with people of color to dismantle white supremacy and work toward the liberation of all.”

“The mission of the Corvallis Area Branch of the NAACP in Oregon is the same as the national organization. The mission of the National Association for the Advancement of Colored People is to ensure the political, educational, social, and economic equality of rights of all persons and to eliminate race-based discrimination.

Join us on the 2nd Thursday of every month at 7:00pm for our membership meeting, which is open to all.”

“Rural Oregonians are showing up and planning demonstrations and car caravans across the state, like Cottage Grove Community United, who are demonstrating this evening in a public park on Main Street holding signs and banners declaring Black Lives Matter.

Do you want to take action locally? Gather your human dignity group, book club, classmates, or friends for a public demonstration or car caravan around town with signs. Not sure where to start? Reach out to ROP at [email protected] and we can help you make a plan!”

“Together we aspire to create an inclusive community, where all individuals can fully engage their gifts and talents, and where we can dream of a more just future. We hope you will join us in sharing your hopes, cultural traditions, intellectual passions, ideas, curiosities, and successes. We also hope you find us when you need support, have a problem to work through, or just need someone to listen to you.”

“The Women of Color Caucus (WoCC) aims to celebrate, empower, and advocate for women of color at Oregon State University (OSU) by focusing on the professional development of women of color in all disciplines to enable them to become successful contributors to their field. This mission will be accomplished by providing support, community, and resources for women of color at OSU, while enriching OSU with the contributions of often silenced people.”