The Luck of the Irish Takes a Year Off 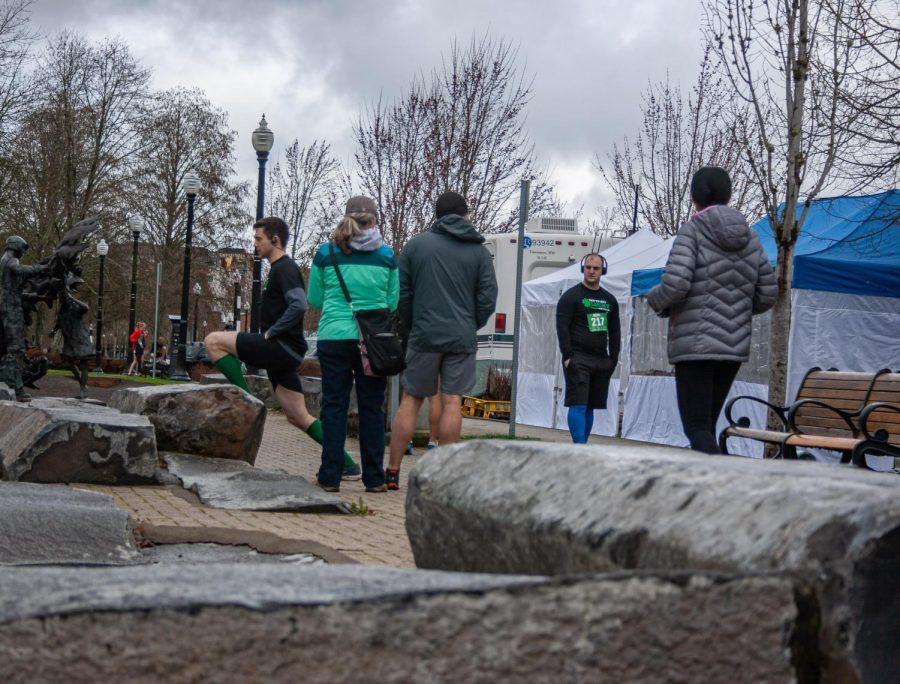 Runner stretch and listen to music before the race.Photo by Orange Media Network photographer Kyle Schwer.

Saint Patrick’s Day, or the Feast of Saint Patrick, is the national holiday of Ireland, existing to commemorate the arrival of Christianity in Ireland in the fifth century, and is celebrated on March seventeenth, the generally agreed upon date Saint Patrick died.

According to Saint Patrick’s Confessio, a document believed to be written by Patrick himself, Patrick was kidnapped from his father’s home in Britain at age sixteen and taken as a slave to Gaelic Ireland. For six years he worked as a shepherd, until God spoke to him, telling him that a ship waited on the coast to take him home. He then returned to Northern Ireland for many years and converted thousands of Irish from Paganism to Christianity.

Saint Patrick’s Day is the national holiday celebrated in the most countries around the world. However, the parades and festivals that the holiday is notorious for is actually a North American tradition, as the Americas started to hold public festivities in the eighteenth century, while Ireland didn’t adopt the tradition until the twentieth century. The green beers, milkshakes, rivers, cars, pets, etcetera, were started by Irishmen living in America.

What a time to be quarantined in your home as the doomsday bells ring on every form of media imaginable. While going out for a green beer sounds nice and refreshing, this year might be a good time to shake things up and create some new in-house ways to celebrate. Besides, odds are that the celebration you were planning on attending has been cancelled anyway.

If you have younger people living with you (or even if you don’t) try challenging them to make a leprechaun trap. According to Irish folklore, capturing a leprechaun is said to bring about the luck of the Irish, so who knows? Maybe you’ll get lucky and catch one.

Some Corvallis residents weren’t scared away from celebrating the holiday, even a few days early. The yearly run, Run to Get Lucky, happened on March 14, where runners gathered along the river to run either a 5k, 10k, or 15k, and indulge in a beer provided by Block 15 brewing.

Assuming you’ve stockpiled enough food for the coming apocalypse, you could cook a traditional Irish meal. Come on, tell me a shepherd’s pie with cheesy beer and bacon soup doesn’t make your stomach growl. And if you just have to have that green beer, instead of going out for one, you could get some green food coloring and make as many as you want.

If the doomsday bells don’t scare you and you plan on having a traditional Saint Patrick’s Day, there are some events in Corvallis that, are still slated to happen. FireWorks Pub and Pizza is hosting live music alongside a selection of Irish food and drink at 6:00 PM, fiddler Oisin Mac Diamarda and his band Téada will be playing a set of classic Irish tunes at the Whiteside Theater at 7:00 PM, and the Greenberry Tavern is serving Corned Beef and Cabbage during karaoke at 7:00 PM. For more information, please contact the hosts.

Regardless of your plans, please remember to stay safe and to stay healthy.

Disclaimer: This article does not reflect the views of the author or Beaver’s Digest