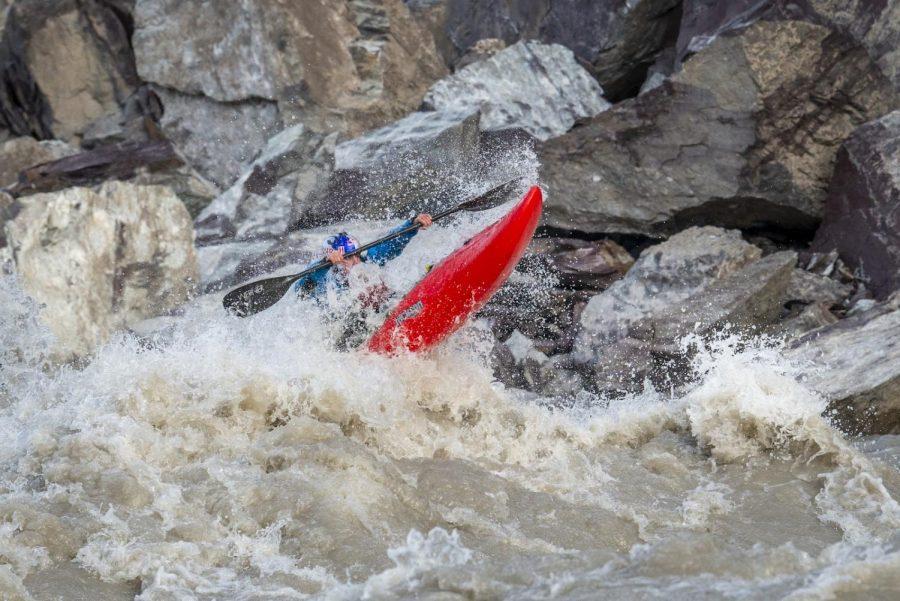 Nouria Newman performs in the lower Indus river in the Himalayas, India on August 17, 2018. Editor’s Note: This image was not taken on Nouria Newman’s solo trip itself; but was re-created in the same region in the following days. // Ali Bharmal / Red Bull Content Pool

The Banff Mountain Film and Book Festival is currently on its 44th year of touring the world, and it’s coming this Feb 9 and 10. The event will take place in the Whiteside Theatre in downtown Corvallis.

Originating in Banff, Alberta, the film festival is based on short films, adventure, culture, environment and travel. Here’s a link to the trailer.

Though the festival is world wide, it has humble beginnings. Decades ago, a small group of friends walked into a bar to share their own home videos over a few beers. Starting with themselves and then expanding their work to others, it quickly turned from a friendly tradition into one of the biggest traveling adventure festivals in the world.

Phil Bridgers, who’s one of many hosts traveling with the company promoting the event, has only great things to say about the experience.

Image from Into the Canyon, premiering night one of two

“Anyone with a sense of adventure will feel the impact of this festival. The stories are inspirational, not only in adventure, but in an environmental capacity too,” Bridgers said.

The films shown over the two night event feature stories and adventures from all around the world. From hiking the entire length of the grand canyon, over 277 miles, to kite-skiing across the Atlantic tundra and kayaking down waterfalls, the Banff Festival is truly a once a year experience.

Bridgers excitedly tells how the festival has added three new cities for this year’s tour, Corvallis included. Their mission is to not only show their own stories, but to make new ones here. Banff plans to return to Corvallis every year and not only build a community but be part of one.

“Each year we look for communities that have a fair population and are like minded people— people who value and love the outdoors,” Bridgers claimed.

Films range from around an hour to as short as 5 minutes. The three hour event will begin each night with a variety of films, including the feature film which is 30-45 minutes. Then comes an intermission for guests. After the break, another set of shorter films will be streamed for the remainder of the time. Both evenings will be playing different films, so feel free to check out the line-up here for the two night program with film titles.

Image from A Nordic Skater premiering night two of two

Bridgers says the festival plans to stop in about 550 communities in over 40 countries.

“This year’s tour features a collection of the most inspiring action, environmental, and adventure films from the festival,” Bridgers said.

Of the hundreds of films submitted, only around 30 are chosen to be featured around the world.

“We want people to come out and give it a try. Come see what’s it all about, I promise you won’t be disappointed,” Bridgers said. “Around 75% of the films shown are shot by the people in them. It’s the best of the best.”

Tickets are on sale for only $18 for one night and $35 for both online, find them here off Live-To-Play.com