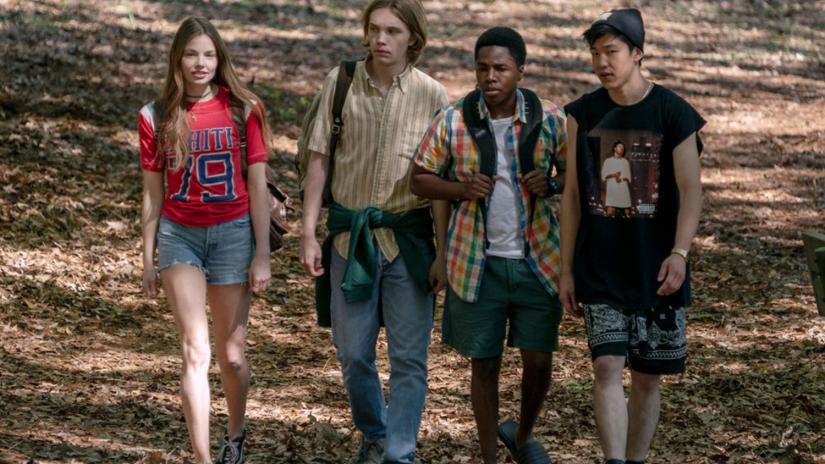 Looking for Alaska characters walking through the woods. Photo from Den of Geek.

In mid-October, Hulu produced and released John Green’s first tv-show adaptation of one of his most popular novels, “Looking For Alaska,” after trying to adapt the book into a movie for years.

If you’re a college student at the moment, then you most likely remember the “The Fault in Our Stars” frenzy that filled every high school, movie theater, and local library back in 2014. Not more than a year later, John Green had his 2002 book “Paper Towns” turned into a movie. Now if you kept rolling with his books, more likely than not you had a chance to read “Looking For Alaska.”

The book follows Miles ‘Pudge’ Halter, a Florida teenager infatuated with famous last words and in desperate search of ‘the great perhaps.’ When Miles feels like his life back in Florida is getting him nowhere, he packs up and transfers to his dad’s old high school in Birmingham, Alabama. While there, he ends up meeting a group of friends, including one Alaska Young, a girl fascinated with trying to figure out how to get out of the labyrinth.

While she hasn’t started it yet, Oregon State Alumni, Sara Marie, says the book is one of her favorites. “I really liked that it was unfiltered and transparent about what the characters were going through. That’s something I think is really important when you’re growing up and reading about people your age. It’s validating to know that there are characters out there you can relate to.”

When they first announced that the book was being made into a short series, I was over the moon. You’re able to tell a book in so much more detail if you have about eight hours to adapt it as opposed to two. I remember waiting for a movie for years before realizing Sony had bought the rights to the film, but never wanted to make it due to funding.

The show has around eight episodes, each spanning a little under an hour, and each one pulling you deeper and deeper into the secrets and lies at Culver Creek High School. Hulu’s production of this show really rivals that of anything Netflix has put out on their own.

The vibe the show gave me is “Thirteen Reasons Why” meets “Pretty Little Liars,” in terms of setting and production style. What I really loved about the show was that because it is a show, you’re able to see the standpoints from each of the four main characters which you didn’t get to experience from reading the novel and just seeing Miles’ perspective.

When you go back and watch old movies and shows from the mid 2000’s, you know you’re watching something that took place in the mid 2000’s and there’s such a disconnect. In “Looking For Alaska,” you know that you’re in 2005, but thanks to the production and the struggles the characters get into, you feel like you’re in 2005, right down the soundtrack full of The Strokes and Death Cab for Cutie.

When asked what she thought of the series so far, junior Josie Bryan said that she “though it was good, but the first episode didn’t really pull [her] in enough to keep watching.”

I really understand that. While I think the show was phenomenal, I agree that the episodes were a little too long. For a show like “Game of Thrones,” I didn’t mind that episodes were so long because they’re action based shows, where things are happening at every cut to the next scene.

With “Looking For Alaska,” I think the hour was a little excessive per episode and made it harder to binge because it is a drama, so maybe every other scene something really exciting would happen. In my opinion I think maybe cutting the episode length back to forty minutes or so and then having the series consist of maybe twelve episodes might have been the better call.

In a review by Polygon, they claim that “the adaptation tells the story better than the book” and I couldn’t agree more. While telling the story in an accurate and beautiful way, the show pays homage to the fandom’s fifteen year push for the adaptation that has been brewing since the book’s release.

When nearing the end of the series, I was on the edge of my seat waiting for the infamous three page final monologue from Miles (something Green sprinkles into a lot of his novels) and when it came I was not disappointed. When it came, they played emotional cut of all the important scenes throughout the series, leaving me sitting in a puddle of tears as we see Miles walk off into the final shot.

The show left me with the same ‘invincible’ energy I felt when finishing page two-hundred and twenty-three back in high school. Taking into account the amazing production, casting, scoring, and platform of this show, Hulu captured the essence of the novel in one of the most accurate and beautiful adaptations I have ever seen, especially for a John Green novel. My verdict, is a 8.5/10 solely because of the length of the episodes dragging on a little too much and getting in the way of the beautiful story being told.