Opinion: Oregon State Student reflects on pilgrimage to The Grotto 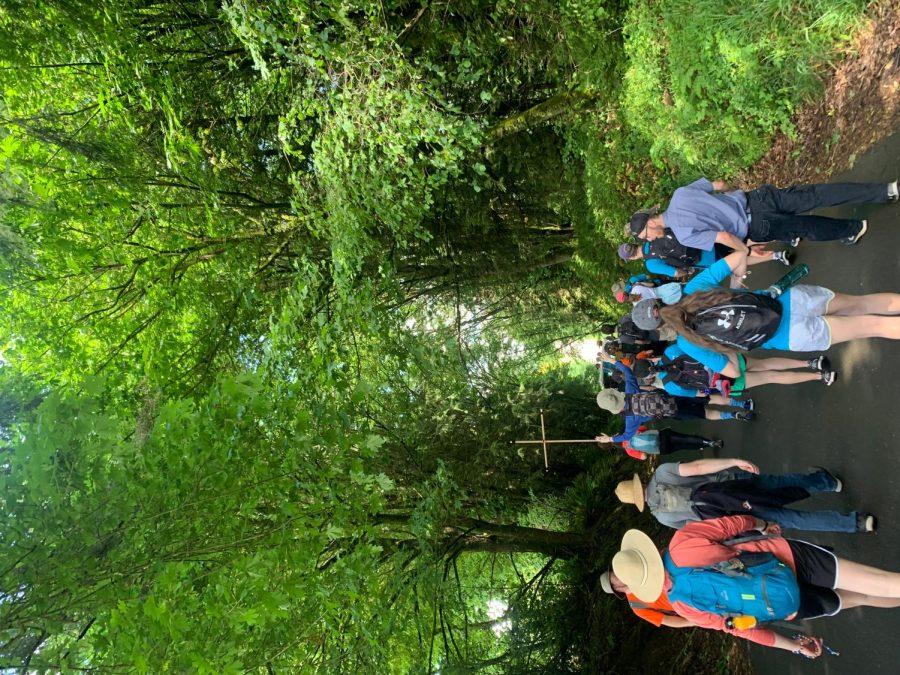 At the beginning of this year, if you had told me that I would be walking from Salem to Portland, I would have told you that you were crazy.

Every year, the Newman Center at Oregon State University (Catholic Campus ministry) hosts a walking pilgrimage, starting at St. Joseph’s Catholic Church in Salem, Oregon all the way to The National Shrine of Our Lady of Sorrows, otherwise known as The Grotto, in Portland.  This pilgrimage is open to all students and parishioners, and any one who wants to join. Myself, 130 eager Catholic students from OSU, U of O, and various schools around Oregon, priests and missionaries of the St. John’s Society and sisters from the Society of Mary chose to participate in this year’s pilgrimage to The Grotto.

The week prior to this event, many of my friends asked me my plans for the weekend, and when I told them I would be walking from Salem to Portland, I got quite a few concerned looks and one major question: “WHY?!”

Well, I will start by saying a pilgrimage in the Catholic sense is a spiritual journey. Many Catholics choose to make these journeys to various shrines and holy places all over the world to grow in their relationship with God and increase their faith. It is a time to walk, pray and reflect on the journey before you. Many people go into these physically and emotionally challenging pilgrimages with prayer intentions, whether they be for themselves (a physical illness, something one is struggling with in their life/faith) or for others (a family member/friend). Personally, I went into this journey with the intention of asking for God’s help in making a decision that would change the course of my current path in life, and also with the intentions for a few of my friends who are struggling with faith and family. Throughout the weekend, my thoughts and prayers centered around these intentions, and I dove deeper into trusting these worries and anxieties about my future and my friends to God, knowing that through the intercession of Mary, the Mother of Jesus, He would provide.

It was my longing for answers to these prayers that kept me going when things got rough.

Although I pride myself on my physical fitness abilities, I was very aware of the toll that walking 60 miles in three short days might take on my body. I was warned by many people who had done the pilgrimage before that no matter how in shape I thought I was, this walk would probably break down my body more than I could imagine, and let me tell you, they were not wrong.

The first day, we walked 18 miles, from St. Joseph’s Catholic Church in Salem, to St. Mary’s in Mount Angel. We had a small army of helpers who were driving porta-potties, a U-Haul with all of our overnight belongings, and some vans for those who were unable to walk the entirety of the way.

The walk started off pretty ugly, but as we broke out of the city of Salem and turned onto Silverton Road, the scenery improved and It was almost therapeutic to be walking along the farms and orchards, simply talking with friends and growing closer in relationship with them, and praying the whole way there. We were lucky enough to start the day with light cloud coverage, but around 1pm, the rain started and didn’t stop until the next morning. After about three hours of walking in the rain, with only a mile left until we got to our destination, I was already soaked all the way through despite the efforts of my trusty rain coat. Naturally, I wasn’t going to let the rain get me down, so I decided the only reasonable thing to do was to start jumping in all the puddles. It made that last mile more fun and easier to truck through.

We spent the night eating dinner, popping blisters, and soaking our feet in ice hoping that they would somewhat be able to recover for the next day. After attempting to sleep on the gym floor with my sleeping bag and camping mat, we got up the next morning for Sunday Mass and breakfast. The second day was the hardest; we were walking 27 miles from Mount Angel to Oregon City. I was still feeling pretty strong, as my muscles were in good condition and I didn’t have any blisters (yet). It was a beautiful, sunny day, and we were walking along backroads, which made for gorgeous country scenery of endless fields and beautiful farm houses. As the day went on, I could feel my feet becoming more and more weak, and I was dreading the blisters that were starting to form on my right foot. By the time we got to lunch around 3pm, I was exhausted and my feet were rubbed raw from the roughly 30 miles we had walked thus far. To say the least, I was not looking forward to the 12 mile trek we still had to endure to Oregon City. But with that being said, I remembered the reasons I was walking, my intentions and realized that why I was doing this is worth the pain in my feet and legs. So, onward I pushed.

With each step, it seemed as though my feet were screaming at me to stop, but that physical pride that I mentioned before kicked in and helped me to keep going. The last six hours of that day were the hardest and made me realize how terrible I was at judging distance. At one point, I was sure that we only had about two miles left, and after an hour and a half more of walking, I was informed that we STILL had two miles. All I could do was pray and offer up my suffering in the hopes that my prayers would be answered. I knew each step was for the greater glory of God, so that he would work in my life and the lives of my friends and family.

I finally arrived at St. John the Apostle Catholic Church in Oregon City at 9pm. I immediately ripped off my shoes and jumped in the ice bath. My whole body ached, my feet were rubbed raw and I started to develop heat rash on both feet. Anyone who tells you that wearing two pairs of socks will help with long distance is lying to you. I was so relieved to be done for the day, and to only have one day left, but all I could do was hope that the meal prepared for us that night would heal me enough to persevere through the final day of the pilgrimage, in which we would be walking 16 miles from Oregon City to The Grotto.

After another restless night on a gym floor, I woke up to swollen feet and very sore muscles. If it wasn’t for the blister care station, pre-wrap and baby powder I probably would have called it quits. But I had already come so far, and I knew that the fruits of the suffering I would endure in this final day would be far greater than any pain I was experiencing in that moment. This is what kept me going.

This day of walking was mostly through cities, and the scenery wasn’t as enjoyable as the previous days, which made it just a little bit harder to keep walking. But the one consolation that did help was prayer. With every step and every breath, I offered up my pain for my intentions, uniting my suffering with Jesus Christ’s suffering on the Cross. And with each step, I could feel God strengthening me to continue. Though the sun was beating down on us, and every bone and muscle in my body was begging me to stop, I kept going because I knew it would be worth it and I knew that I would regret it if I didn’t. We took many fifteen minute breaks along the way, and each time I did my best to elevate my feet in hopes that the swelling would go down, even just a little bit. After the initial pain of restarting after each break, eventually my feet would adjust to the pain and walking would become easier. Sometimes, even running for a few hundred feet felt better than walking because I was able to use a different set of muscles.

Finally, after 15 miles of walking, we had made it to the final mile going down 82nd Street in Portland. As we stopped to recollect as a group at the street corner, I was preparing myself to really offer up my suffering for my intentions, as my journey was coming to an end. One of our priests, Fr. Maximo prefaced this final stretch by challenging us to take off our shoes and walk barefoot for the final mile. Surprisingly, I experienced no hesitation in doing so. My feet had been so suffocated for 59 miles by my tennis shoes that it was almost a relief to take them off.

As we walked this final mile, we prayed and we sang, and we prayed some more. Once we turned the corner onto Skidmore Street, we were greeted by some of the families of those who were on the pilgrimage. At that point, I was shouting the words of the songs we were singing, and on the verge of joyful and relieved tears that I had completed this journey, all for the glory of God. Although I was extremely relieved to have finished our 60 mile journey, I was almost sad that I would have to wait a year before I would be able to spend the entirety of three days in prayer, growing in my faith and in friendship with Jesus Christ and The Blessed Mother Mary.

We finished our journey with Mass, dinner and the sharing of testimonies. It was so powerful to see how Mary and Jesus had already been at work in the lives of my fellow pilgrims, and filled me with confidence that she was (is!) at work in my life.

So when people ask me why I would ever walk 60 miles during my free time, I would say it is mostly for the experience of suffering, uniting that suffering with Christ’s and knowing that I am not alone in that suffering. And if you’re wondering if I would ever do it again, the answer is 100-percent yes.