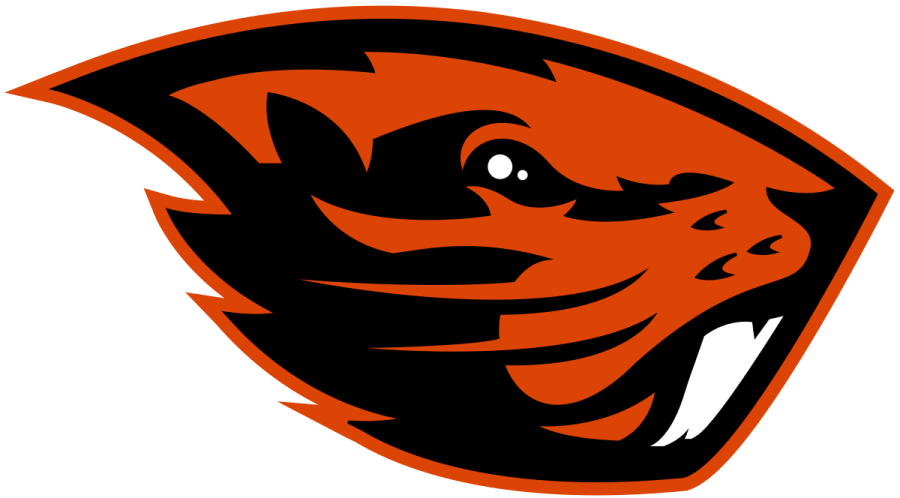 “This is the 21st century, so we wanted to come up with something that was more polished and more art like than the old fighting beaver (with the script ‘beavers’ under it),” Clark said.

Clark explained that Oregon State has gone through several logos throughout the years with regards to the different organizations they have represented.

“Throughout the history of the university, there have been numerous logos. The beaver head logo, which is used by OSU athletics; the university has its own logo and this is what we call the university logo” Clark said. “Athletics over the years have had a variety of logos as time has preceded and technology and design got better. Certain logos have been more popular than others. For example, when I went to school here in 1971 through 1975, the ‘Benny the Beaver head logo’ was quite popular and for a time there was what might be called an angry beaver, or fierce beaver with the words ‘Beavers’ below it. That gave way to the OS symbol with the interlocking O and S. In 2013 after two years work with Nike and the University and the athletic department we adopted the (new) beaver head logo.”

As the Universities VP of Relations and Marketing at OSU, Steve Clark recognizes the importance of our representation and felt it was important to define different aspects of Oregon State.

“Above all else, we are a University that teaches and does research and does outreach and extension work,” Clark said. “The secondary mark of the University would be the beaver head logo which represents athletics. The athletics logo also includes topography that has the word beavers and Oregon State. The design that was provided by Nike provides lots of opportunities for Oregon State athletics to present itself. What that use of both the logo and the topography and even the opportunity for people to buy merchandise with the retro benny, there’s a place for everybody to celebrate Oregon State. You can see yourself in lots of different ways.”

So why the change to the athletic logo in 2013? What does the marketing and athletic department want for Oregon State?

“There’s a number of reasons why athletics departments, sports teams and universities change logos,” Clark said. “One is to remain fresh, and modern in some respects. In our case, whether it’s the institutional logo or the beaver head logo, was to specifically define who we are. We want to be uniquely different. Whereas the OS…could’ve been Ohio State, Oklahoma State or Oregon State. What does OS mean? Benny is a caricature and our mascot. Benny itself isn’t the logo of the university; however, he is a portrayal of school spirit.”

Benny’s influence over school spirit started all the way back in 1941-1942 according to OSU’s Alumni Association and Candace Hayes, who is OSU’s Trademark and Licensing Coordinator.

“The earliest reference to the name ‘Benny Beaver’ can be found in the 1942 Beaver yearbook on page 14,” Hayes said. “Pictured is a group of students with a beaver statue mounted on a trailer named ‘Benny Beaver.’ The photo was taken in connection with campus activities surrounding Homecoming for 1941.”

Clark signified the importance of representing Oregon State and how its vision and its visual representation should be shared among the community.

“Oregon State has a unique individuality, it should be shown our logos, and we work very hard to represent OS in a way that people will identify with and recognize easily,” Clark said.