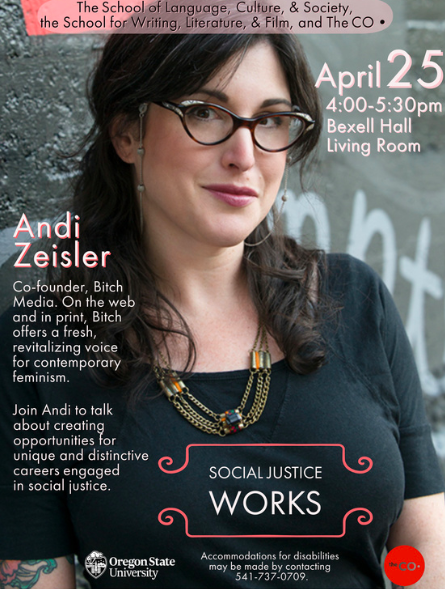 Bitch Media’s Andi Zeisler is coming to Oregon State University on Thursday, April 25, 2019. ”Bitch Media” is a quarterly and online magazine whose mission is to “provide and encourage an engaged, thoughtful feminist response to mainstream media and popular culture.”

According to its website, Bitch Media strives to be a fresh voice in contemporary feminism that values complex arguments and refuses to ignore the uncomfortable realities of our “unequivocally gendered world.”

Bitch Media has turned from a volunteer-run zine into a non-profit feminist media organization that offers writing fellowships and internships on a quarterly basis, has published books and has established a Community Lending Library, “a local resource that features books on everything from feminist theory and queer studies to pop-culture history and young adult literature.”

The magazine was first released as a zine in 1996 by Lisa Jervis, Benjamin Shaykin and Andi Zeisler. Jervis and Zeisler were high school friends and recent college graduates who obsessively loved magazines and pop culture. In the early 90s the two friends interned at Sassy (Magazine), a now-defunct feminist teen magazine that aimed to be a counterpoint to magazines like Seventeen. Andi Zeisler, talking at OSU on Thursday, is now one of the cofounders and creative/editorial directors of “Bitch Media.”

“When we started Bitch there were like four major networks and a couple of cable channels and ESPN and whatnot, there was no streaming, the volume of actual stuff that’s available now makes it a completely different landscape. … the messaging is different and the path of absorbing those messages is very different now then it was,” Zeisler said. “I think it’s really cool that people are learning about feminism from people they admire and the first time they encounter the word feminist or the tenets of feminism it’s coming to them through very positive optics, whether it is coming to them through Beyoncé or Emma Watson.”

According to Zeisler “Bitch Media” was a project that combined feminism and pop culture because pop culture is a common language that is participated in by most people.

“Bitch was a very reactive project,” Zeisler said. “[Because] feminism is something we still need and one of the ways that pop culture is beneficial is that it is a common language, everyone participates in some way in pop culture and really we don’t often think about it, but it’s the quickest conduit for people to figure out where they are in the world, how they feel, who they want to be and who they want to be with. There is so much that is in pop culture that directs us, it’s not just entertainment.”

This is where Bitch was born. With 300 copies being distributed out of Jervis’s station wagon, while the friends sent copies out to journalists, trying to get a write up on the magazine. The effort paid off when the “Chicago Tribune” wrote that Bitch was a “breath of journalistic fresh air blowing through the newsstand.”

Andi Zeisler is the co-founder of Bitch Media, in addition to a freelance writer and illustrator. You can find her work in periodicals, newspapers and online. She coedited” Bitchfest: 10 Years of Cultural Criticism from the Pages of Bitch Magazine,” authored “Feminism and Pop Culture and We Were Feminists Once.”

Zeisler graduated from The Colorado College with a B.A. in Fine Arts, that brought her to designing rugs for Pottery Barn. All this led to her becoming Bitch Media’s co-founder and creative/editorial director, creating a feminist empire from a zine she created with her friends.

Zeisler will be coming to OSU Thursday in the Bexell Hall Living Room from 4 to 5:30 p.m. to talk about creating opportunities for unique and distinctive careers engaged in social justice work. The event is free to attend and information for the event can be found on the OSU Events page or questions on the event can be directed to Liddy Detar, [email protected]