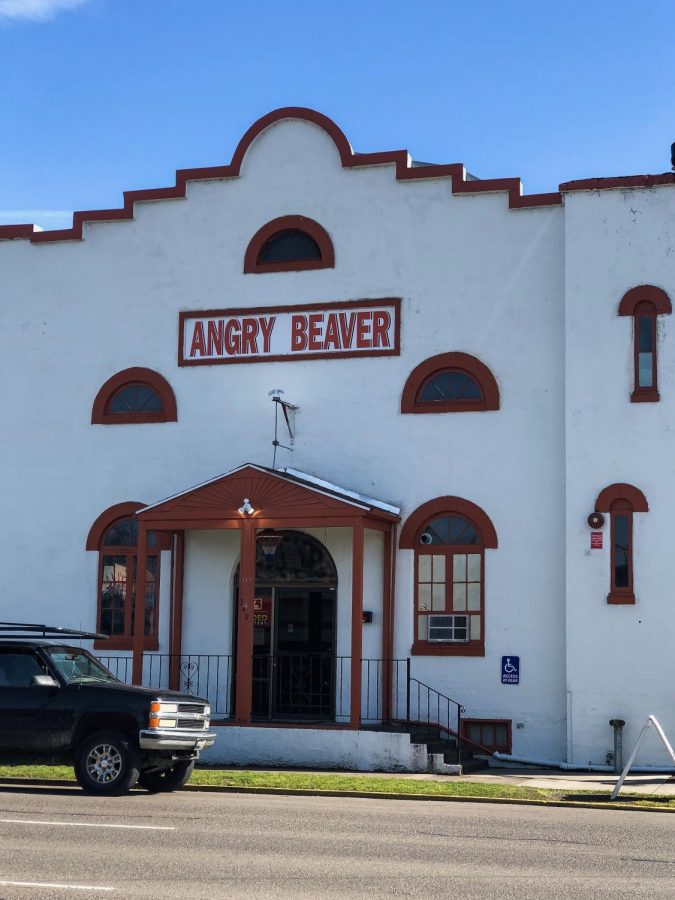 The Angry Beaver Sports Grill, located in Downtown Corvallis, has made some recent changes, including hosting Oregon State student DJ’s. The bar itself is heavily decorated with Oregon State athletics memorabilia, houses an arcade, food and drinks and now, live DJ’s. Most Friday nights, the bar rotates local DJ’s that fill the bar with anything from house music to EDM.

The bar was first created by owners Steve Anderson, Randy Holmes and Brad Joelson. They transformed the building that was previously home to a coffee shop, into a “museum” of OSU athletics and a place where alumni could meet before and after sports events. One of the items that make up the Beaver history they display is “a jersey that new football coach Jonathan Smith wore in the Fiesta Bowl back when he played quarterback for the Beavers.”

On the several screens they have in the bar, they show all Beaver football and basketball games. They also have a St. Patrick’s Day, trivia night every Tuesday and as of Jan., they feature live DJ’s on Friday nights.

One of the DJ’s at Angry Beaver, Seth Nelson, is a fifth-year senior at Oregon State majoring in human development and family sciences. Nelson has been a DJ at the bar since they started featuring DJ’s. He would DJ with his best friends before making a “real thing” at Angry Beaver, and performed at OSU’s event in the fall, Battle of the DJ’s, with all of the other DJ’s at the bar.

When Nelson DJ’s, he likes to play mostly electronic music or EDM, along with house and trap music. He says what makes the bar unique is the people. He noticed that Corvallis didn’t have a place where people could go to listen and dance to EDM music and thinks “it is a very refreshing change of pace when compared to the usual Corvallis bar scene.”

Along with Nelson, DJ Connor Grover has been DJing at Angry Beaver since January when they created the event. Grover is a junior at OSU, majoring in business. Outside of Angry Beaver, Grover has been DJing for two years and got to DJ for Kappa Alpha Theta sorority’s house dance in the fall of 2018, as well as the Battle of the DJ’s, where one of the owners discovered the boys.

Getting to DJ with his close friends is also one of the reasons why Grover loves performing at the bar, but he also enjoys the way the bar encompasses Beaver Nation. “As soon as you walk in you cannot help but notice all the awesome sports memorabilia from OSU and all over America. Some of the things you find in there are memories that our parents or even grandparents experienced if they may have attended school here.”

He says every time he goes back to the bar, he always finds something on the wall he hasn’t seen before and that “blows [his] mind.” Grover likes to play rap music, throwback songs, and sing-alongs to engage the crowd. “I try to make my sets as different as possible each week, so our regulars aren’t hearing the same songs.”

OSU senior, Kevin Nguyen, also DJ’s at Angry Beaver almost every Friday Night. Nguyen is majoring in Accountancy and Business Information Systems. His favorite part about performing at the bar is the atmosphere and the way the bar is set up with a second floor that looks over the main floor.

One part of the experience that makes DJing special to him is how “Randy, the owner, is really supportive of us and pretty much gives us the freedom to do our own production.” Nguyen says this includes their own lights and visuals that go along with their music. He likes to switch up the music he plays every week, going back and forth from house music to rap music.

Nguyen says Angry Beaver’s charm comes from “a combination of supportive management who believes in our vision but also the fact that all the DJ’s are students at OSU. We get to DJ for our friends and have similar music taste as our peers. Every week is something new and we have some exciting things planned for next term.”

The Angry Beaver Sports Grill is located on 4th St. right off of Adams. Minors are welcome until 10 p.m. For more information, visit their website: http://www.angrybeaversportsgrill.com/