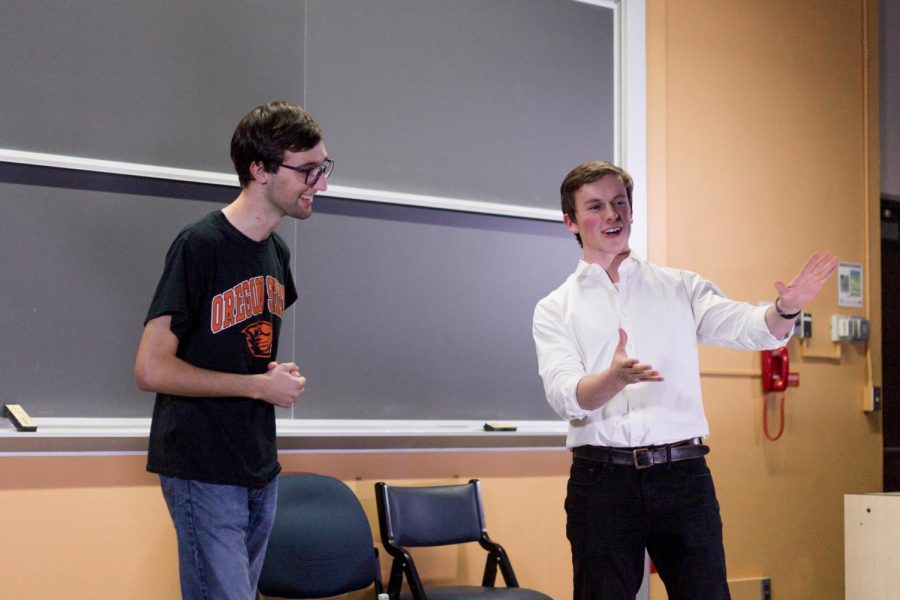 Looking for a laugh? On campus, plenty of laughter can be found at one of Oregon State’s clubs; the Improv Comedy Club. The Improv Comedy Club is a group of OSU students who meet weekly to work on improvised comedy for their shows, held in Gilfillan Auditorium three to four times a term.

The club’s president and co-creator of the club, Grant Thesing, has been involved in improv comedy since December 2016. “I wanted to create a community where people can bond with each other by laughing and performing together,” Thesing said. The club has grown since it was created and Thesing said that now they share goals of not only being great comedians, but great improvisers and renowned performers.

Thesing said that anyone can do comedy, but only some fall in love with it. “Once you fall in love with it, you will be addicted,” he said. His favorite part of doing comedy is constantly improving and perfecting a skill, which he says is something you can continue doing forever.

One of the skills improv can give someone, is the ability to be prepared for the unexpected. Thesing said what they’re doing, is practicing being unprepared.“In improv you stumble upon an idea and upgrade and explore it instantaneously as the idea is being presented,” Thesing said. “It would be like presenting a new project idea to your co-workers and bosses with no preparation and killing the presentation and raising profits for your company.”

Thesing looks up to many comedians; some of the improv comedians he likes are Ian Roberts, Matt Walsh, Matt Besser, Amy Poehler and Tina Fey. As for stand-up comedians and comedy writers, his inspirations are Dave Chappelle, John Mulaney, Bill Burr, Conan O’Brien, Hayes Davenport and Scott Clements.

One of the Improv Comedy Club’s long-time members, Keanu Cropp, is a senior studying Philosophy. Prior to joining the club, Cropp had done improv in Portland for a year and was really grateful to find out OSU had an improv club. He said that he enjoys improv comedy because it gives him “the freedom to express myself in a physically creative way while also bringing the audience a time to relax and enjoy the entertainment.”

If an opportunity ever opened up for Cropp to continue his comedy career into the future, he said he wouldn’t be opposed to following the path towards becoming a comedian. One of his favorite comedians of all time “is Steve Martin, hands down.” Cropp said he got the opportunity to see him perform live in the summer of 2018.

Another member of the club, Brian Layng, is a sophomore pursuing a masters degree in robotics. Layng had done improv comedy for six months in Pennsylvania prior to joining the club in September 2017. He originally started doing improv comedy to improve his public speaking skills and said now he loves improv “because I feel it sharpens my wit and ability to handle unexpected situations in every aspect of my life.”

Layng said one of the unique parts of the club is “when all the improvisers have this unspoken understanding of what the scene is about, why it’s funny and moves to make that make the scene progress and stay interesting. These are the moments that the audience seems most entertained.” Layng’s favorite stand-up comedian is Bill Burr and favorite improvisers are Andy Daly or Matt Gorley.

The club is welcoming to new members. “If you are scared to dip your toes into improv, you can just sit and watch a meeting and see that it is low stakes,” Thesing said. After attending two consecutive meetings, anyone can become a member and performer in the club. They meet once a week for most of the term and perform several times for live audiences at OSU.

The Improv Comedy Club’s next show is on March 7 at 7 p.m.