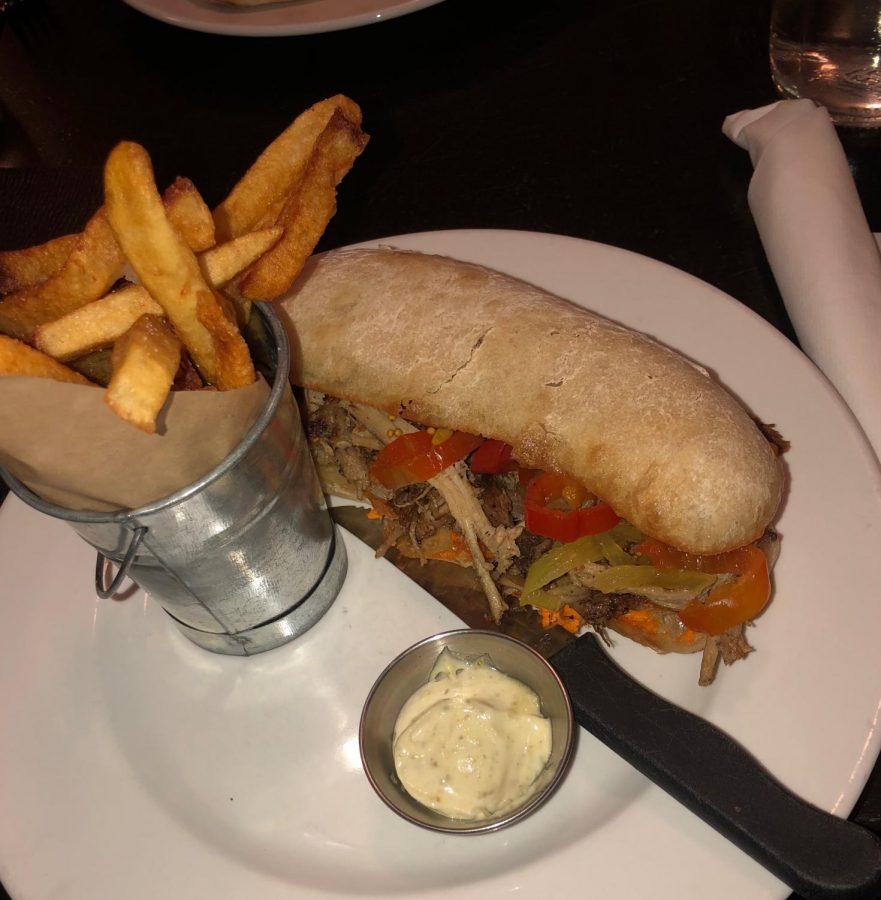 Upon entering Caves, I had a nice first impression. The restaurant itself is small but very cozy. Most of the inside was primarily stained wood lit by warm light, but the massive selection of alcohol at the main bar made this place feel like cross between a cabin in the woods and a trendy European pub.

After deciding not to get a drink, of which Caves has the largest beer selection in town, I ordered the pork sandwich that came with what seemed to be house cut fries and a deliciously tangy aioli on the side.

The pork was pulled, cut into small bits and not slathered in bbq sauce like I’ve seen at other restaurants. Instead it was still juicy from its cooking process and just slightly salty. It reminded me of the pork carnitas my mother slow cooks at home, more so than your traditional American bbq pulled pork.

On the sandwich came sweet pickles, an assortment of pickled peppers and a house made beer cheese sauce that was nice and rich in both texture and savory flavor. The bread was crunchy on the outside and still firm on the inside, which helped to hold the sandwich together and not get soaked by the beer cheese sauce. This was definitely one of my favorite sandwiches to date. Everything came together amazingly. The sweet pickle contrasted nicely with the salted pork and the beer cheese sauce was rich and flavorful. The peppers added a nice kick without anything being overwhelmingly hot.

After that main course, we ordered dessert for the table, of which I had the chocolate torte. This came with a whipped cream that seemed to be infused with either maple or bourbon. The chocolate torte was good, but nothing too special. I’d expect to get the same quality dessert at most restaurants that would offer this or a similar flourless chocolate cake. It was extremely firm, very rich and as sweet as fudge. It was as good as you should expect a chocolate torte to be. The most special part about this was the whipped cream, which surprised me with its uniquely sweet maple flavor.

All in all, I would absolutely recommend Caves to my friends. The atmosphere was cozy and welcoming, and while the dessert wasn’t super special, the entrees absolutely stood out to me as some of the best I’ve had in Corvallis. Plus, if you are of legal drinking age, Caves boasts a massive menu of beer imported from all around the world, as well as a pretty substantial list of whiskies that would be difficult to find elsewhere in Corvallis. I definitely plan on going back at some point.

I came into Caves with high hopes as I had previously had their happy hour nachos and loved them. The nachos have a unique cheese sauce; it was much thinner and saucier than typical nacho cheese.

This time around, when the happy hour menu wasn’t available, I went with the masala dish. I was bummed because there were not many vegetarian options, so if you are a vegetarian, keep that in mind! The pita bread that was paired with the masala was tasty, but the masala itself was a bit bland. The white sauce (sour cream?) that was on top of the chickpeas was tasty, but it quickly dissolved into the chickpea mix and the flavor got kind of lost. It was also paired with a green sauce that came on the side and this sauce was very tasty. It had some acidic qualities and was very light and fresh. Overall, I would give the masala dish a 4.5/10. It was tasty, got the job done, but was ultimately kind of boring and definitely not something I would order again.

For dessert, I ordered the chocolate and hazelnut bread pudding. I had very high hopes for this dish because I love bread pudding. It came with a delicious whipped cream on top and had good texture. The pudding had a good balance of chocolate but was a little too heavy on the hazelnuts. I would give this dish a 7/10. It was yummy, but nothing to rave about.

I really enjoyed Caves, firstly for the aesthetic of the restaurant and then for the food. As a rather picky eater, there wasn’t a ton on the menu that interested me, so I decided to order a burger. Honestly, you can’t really go wrong with a burger, but this one was definitely good. I also give them lots of points for the fries, because I like my fries to not be too underdone and these ones definitely were not. What really took the cake, however, was dessert. Between the three of us, we ordered a chocolate hazelnut bread pudding and a flourless chocolate torte. As a lover of chocolate, the chocolate torte was absolutely amazing. The texture was great and it was extremely chocolatey. Splitting it was probably a good choice because it is a very rich torte. The only difficult thing about tortes is the hardened chocolate on top, as it was very hard to get off onto a fork.

Overall, I really enjoyed my experience at Caves and would definitely go back. One thing is that it does feel a bit more upscale than some other restaurants in Corvallis, so that is definitely something you could keep in mind depending on the vibe you’re going for.

Caves Bier & Kitchen is located in Downtown Corvallis, next to Block 15 on 3rd St. For more information and the menu, visit https://biercaves.com/