The Path to Equality Paved in Glass: Wage gap and glass ceiling continue to impact women in the workforce 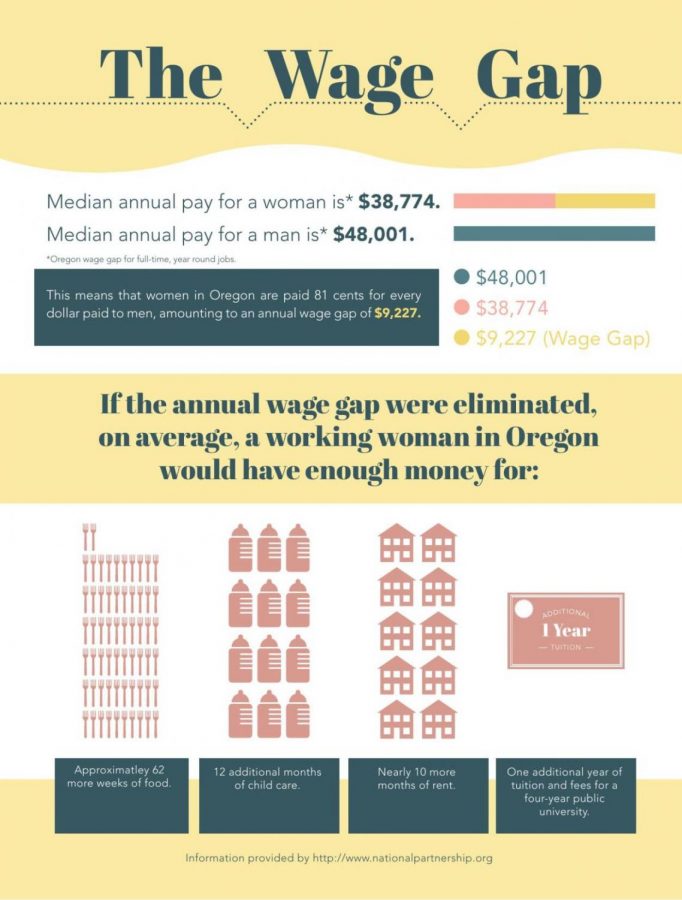 Currently the wage gap is reported to be approximately 80 cents to the dollar. This statistic represents the difference between median earnings between women and men relative to median earnings of men. The women and men included in the data sets, are only those working full-time with a fixed salary in order to keep data consistent.

The Economic Policy Institute credits factors such as job field, type of education and gender-based expectations as the main contributors to the wage gap and why it continues to this day.

The gender-based expectations that influence the path of life many women follow, are put into place by many possible aspects. For example, a study by the World Health Organization and the John Hopkins School of Public Health, found that many children with strict ideas of gender norms developed them due to a religious background. However, OSU Professor Susan Shaw, an expert in women’s’ studies, believes it’s more complicated than that.

“Many things, such as culture, language, experience, and intersecting identities within structures of power and privilege, influence how religion and gender ultimately shape one another,” said Shaw.

These nuanced aspects of life are what have created what many call the ‘glass ceiling’. The phrase glass ceiling was first used by Marilyn Loden in 1978 to describe what she believed was an invisible barrier to advancement. The reason the ceiling is described as glass is to represent the idea that women could always try to move upwards, but would reach a barrier they couldn’t clearly define. The barrier seemed invisible and couldn’t be described. This glass ceiling largely represents these factors that create stereotypes about gender and inequality in the workplace and in daily life. And as shown by the statistics mentioned previously, women of minority face an even denser glass ceiling due racial factors.

It is difficult to define the exact roots of these gender roles and the details of the glass ceiling, but their existence is undeniable. According to the United States Department of Labor, the two most common full-time jobs for women are as teachers and registered nurses. Both these fields of work involve very traditionally feminine characteristics such as a caring and nurturing nature. Meanwhile, it’s reported that the top two jobs for men have been as driver/sales workers and as managers. Many of the jobs that had been reported as more common amongst men had higher median salaries, thus leaving women to hold down the lower-paying jobs.

The jobs many of these adult men and women go into is largely affected by the education they pursued in college. While statistically men tend to go for more math and science-based majors, women tend to stray away from those fields. This trend can even be seen in the charts representing the amount of women vs men in engineering over the last 21 years.

We can see the effect of these gender stereotypes and the glass ceiling being carried over year to year with only slight progress, until recently. For the past 8 years, there’s been significantly larger amounts of women going into engineering. The percentage of female engineering students in the department went from wavering between 14-15 percent up to 25 percent.

In recent years, OSU programs that support women and minorities in engineering have been growing in popularity and have finally gained traction. The Society for Women in Engineering (SWE), Summer Experience in Science and Engineering for Youth (SESEY), and the Phi Sigma Rho sorority for women in engineering are some of the many groups having an influence on women entering the field.

“Spending time on campus and working on a college-level project helped me solidify my interest in biological engineering,” said Kelley Bastin, a member of the 2016 SESEY group. “The experience helped me gain confidence before deciding to go into my major.”

As shown by Bastin’s experience, the growing number of programs driven to help women in engineering feel like they have a place in the field, gives women the confidence to go into new fields that contradict gender stereotypes. With an education in engineering, or any other science or math related field, women can begin to close the difference in median salary between men and women. While the glass ceiling is difficult to define exactly, education is still known to be one major factor. Changing even one factor in favor of women may help to crack the ceiling.

Jenevieve Jones, a second year OSU student of mechanical engineering, has found her own way to get past the glass ceiling.

“Sometimes it feels difficult to be heard in a male-dominated field, but I know my input matters and I’m capable of working alongside anyone else in the class, so I know I belong there just as much as anyone else,” she explained.

There’s been progress in the data and students are gaining confidence through the aid of programs and an evolving society, but the wage gap remains and the glass ceiling stays intact. Even at OSU women are still only 25 percent of the most recent class of engineering students. To close the gap and shatter the ceiling, Shaw explains that it isn’t a one-sided fight.

“People can work on their own attitudes and behaviors, especially by examining their implicit biases and working to change their often unexamined beliefs and behaviors,” she began. “In fact, people who are in greater places of privilege because of gender, race, sexual identity, etc must contribute to the transformation of institutional cultures by becoming allies and working to advance inclusion, equity, and justice in the workplace.”