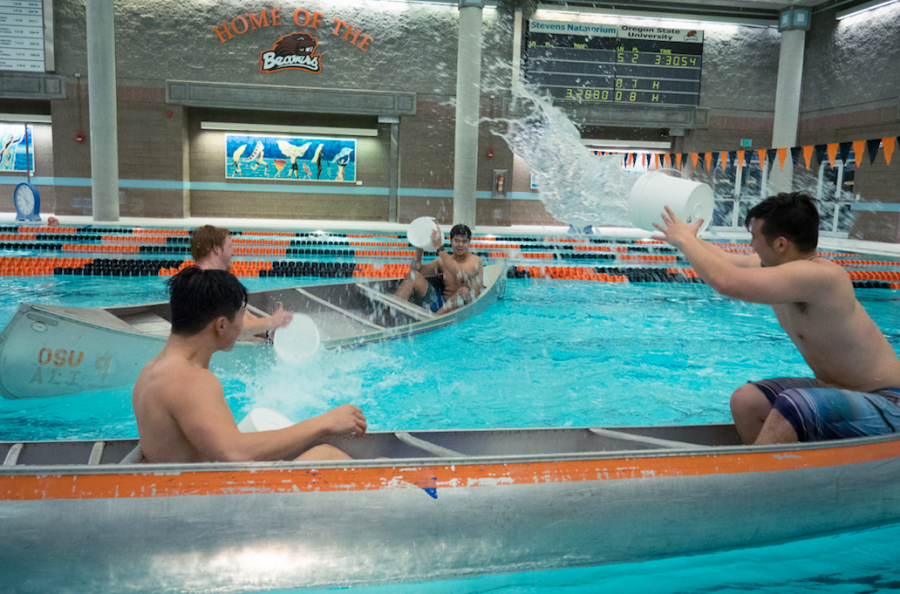 Anticipation builds as the voices of the crowd echo across the pool. A canoe wobbles as waves slosh over the edge. Valuable time ticks away, but none of that matters when one bucket of water can mean victory. The game is called Water Battleship.

This Feb. 9 and 10, marks the second Water Battleship tournament hosted at Oregon State University, after an extremely successful first year where teams participated in the game, battling their way across the Dixon pool.

According to Colby Schoniwitz, program manager at Dixon, the whole event was initially capped at 12 teams, first come, first serve. Two weeks before the event and there were 12 teams already registered. The event’s growing popularity caused it to be eventually restructured to accomodate 30 teams.

“The basis of water battleship is there will be five canoes in Dixon pool,” Schoniwitz said. “Each canoe will be equipped with three buckets and a shield, teams of three or four are going to be able to get inside and line up. Once the timer starts they’ll be able to start sinking other canoes.”

The goal of the game, just as in the board game Battleship, is to sink your opponent’s boats. Teams will attempt to sink their opponents “ships” by throwing water from their buckets into their opponent’s. According to the Recreational Services website, teammates can protect their boat using shields to help block the water being catapulted in their direction. The game is hectic, fast paced and extremely fun for both the audience and participants.

Bringing Water Battleship to OSU was Schoniwitz’s brainchild. He discovered the sport after learning that it was being played on other university campuses and pushed for it to be brought here. “I had to figure out what we needed and implemented the rules based off of research. We finally got it passed and pushed through and then had a few months to plan it.”

“I would hope to one day see this become a bigger sport,” Schoniwitz said. “As sports programs, we’ve adopted different intramural events into leagues. I would love to see it get turned into a league if it continues to be popular. ‘Presentation Support’ was the winning team last year and I would love to see them come and defend their title, but it would also be great to turn this into an underdog story.”

Anyone can watch or play, the event is free to attend. If you’re interested in competing register at the imleagues website . Tuesday, Feb. 5, is the last day to register for the event.