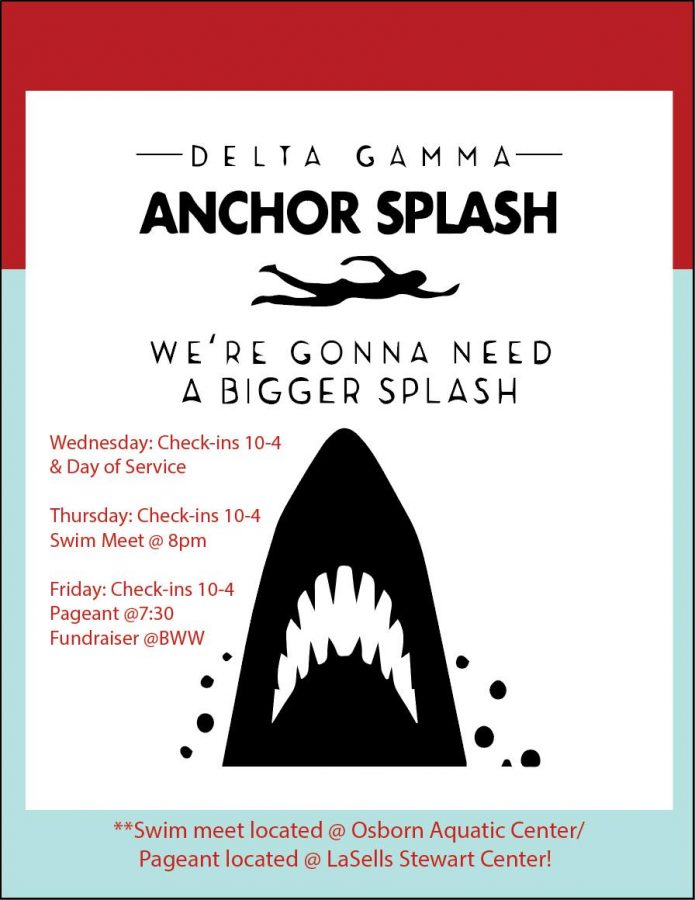 This year, Anchor Splash will consist of daily check-ins, where members of each chapter that is competing can donate dollars and pocket change to the Delta Gamma stands located in the Memorial Union quad during the day to gain points. Double points can be earned from wearing sunglasses on Wednesday, Delta Gamma colors of bronze, blue and pink on Thursday and beaver gear on Friday. During the evenings of these three days, there will be bigger events and greater opportunity for members to not only raise points for their chapters, but to have a chance to meet members of Delta Gamma and other participating chapters.

These events will begin on Wednesday’s Day of Service, where chapters are welcomed into Delta Gamma’s house to create care packages to send to Delta Gamma Anchor Schools, to help young children with visual imparities or blindness. These care packages consist of items that are yellow and red and easier to see, as well as items that are more tactile items, like slinkies.

Thursday evening will bring a synchronized swimming competition, in which chapters will prepare and perform a routine for a panel of judges. The night will end with a relay race with four participants for each competing team that participates in the race. Friday brings the final day of Anchor Splash and the Anchor Splash Pageant. There will be one member of each of the 19 participating chapters who will be competing in the pageant. The pageant will consist of a Q&A, as well as a talent segment.

All of the money raised this year in Delta Gamma Anchor Splash will be donated to the sororities’ national philanthropy, Service For Sight. In the 2017 Anchor Splash, the Delta Gamma Beta Upsilon chapter donated $21,000 to Service For Sight. This philanthropy supports the five Anchor Schools located throughout the United States, as well as other North American foundations which aim to help vision impairment, eye trauma, and conserving eyesight. The Anchor Schools were founded by Delta Gamma members to help young children who are visually impaired.

All are welcome to come watch Oregon State greek chapters and groups compete in Anchor Splash. Tickets of $8 are purchasable at the door of Thursday and Fridays events and all proceeds go towards the final donation to Service For Sight.