Opinion: Shane Dawson & Jake Paul docu-series: is it worth watching? 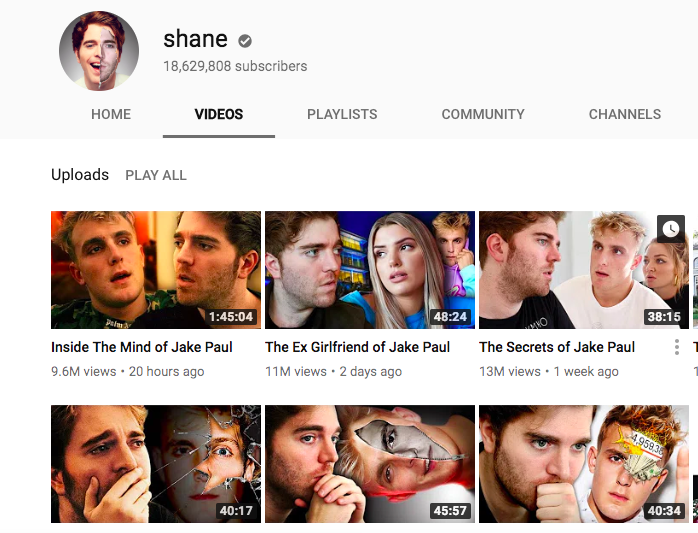 On Sep. 11, 2018, popular YouTube creator Shane Dawson announced that he would be posting a docu-series on the controversial YouTuber Jake Paul. The series would focus on ‘The Mind of Jake Paul’, as the series was titled, but would also delve into the psychology of sociopaths and discuss whether Paul is a sociopath (sociopath is defined as a person with extreme anti-social and manipulative qualities). Dawson announced that the docu-series would be divided into eight parts, and he would examine the mentality of Paul and other YouTubers who were around him. However, Dawson received an overwhelming amount of backlash when delving into the matters revolving around sociopaths.

Controversy started when Dawson sat down with a licensed therapist named Kati Morton to talk about Antisocial Personality Disorder (APSD), a mental health condition linked to the behaviors of sociopaths. Kati Morton does not specialize in APSD, and did her own research on sociopaths to help Shane with the series.  In the video, although disclaimers stated that they were not diagnosing Paul with APSD, many people took the broad statements as accusations towards Paul. While the interview was going on, Dawson implemented ‘scary’ and ‘spooky’ music into the background, trying to villainize the habits of sociopaths and Paul. The internet began to rumble, complaining about Dawson’s insensitivity and the broad accusations he had put on Paul. Many were concerned about people who actually had APSD being treated poorly or villainized. There were also negative opinions on how Dawson spread out the series to not involve Paul until the fifth part, although the docu-series was titled about Paul.

Lots of factors built up to this controversy. First, Paul is already known as a controversial icon. Having over 17 million subscribers on YouTube, Paul’s been involved with many scandals involving the abuse of Alissa Violet, being fired from Disney channel, and blatant disrespect for the people around him. His brother, Logan Paul, has also been a topic of discussion after showing a dead body in the Japanese ‘Suicide Forest’. Dawson accepted the backlash before he released the documentary, understanding the controversy that comes with interviewing creators like Paul. Secondly, Dawson has a history of producing conspiracy and horror-themed videos. When implementing certain frames and music, Dawson’s style was represented as horror, displaying sociopaths in a negative light. Again, he has publicly apologized on Twitter and in the series, stating that he did not intend to make anyone ‘the bad guy’. The series ended on Oct. 18, 2018, and by this point most of the controversy had sizzled out.

Personally, I do not believe that Dawson’s intent was to harm anyone. He has publicly apologized for the misunderstanding and has taken full responsibility for the production; that is something many other YouTubers in the recent months have not done. Dawson is known for his genuine character and many people have forgiven or forgotten about the accusations raised against him. He has created an interesting and revealing series that has drawn millions of viewers in; however, there are some things that I would change about the series.

As a whole, I felt like the series could have been shorter. While many moments were needed, some were not. The series floated around sitting in Dawson’s house laughing, while others were spent idlily driving around with Paul. Although those parts are needed to add depth, Dawson could have cut down a five minute scene to a one minute scene. The audience understood the themes and implications Dawson was trying to put across and didn’t need to prolong it. In my opinion, bringing the therapist with him while meeting Jake Paul was a poor move. Morton the therapist already sparked controversy revolving around villainizing sociopaths; however, after watching the series I believe that she was implemented well into the collaboration. She wasn’t overbearing or underwhelming, but was put into the series at the right moments.

The finale led up to the climax, finally revealing Paul’s side to all the drama, controversy, and backlash. It pulled the whole series together; in a little under two hours, Dawson and Jake Paul go through many topics like the Alissa Violet scandal and Suicide Forest impact. I enjoyed part eight much more than the others, mainly because it got to the point; it displays how Paul feels about what he has done and his mentality since certain scandals. No spoilers included, but I think that Paul has accepted his past, owned up to it (but not all of it), and is starting to grow from his actions.

Overall, Dawson’s series was an intriguing documentary of the lifestyle and mindset of Paul. Some parts drag on, but most of the time I couldn’t keep my eyes away from the screen. It’s a long series; over six hours of footage is published on YouTube (and more cut or off-camera). If you are interested in the drama, a fan of Dawson’s work, want to know some cinematography (the series has wonderful documentary-based camerawork), or just want to be entertained, I’d recommend the series. It’s well put together and has entertained millions of people.

Would I watch it again? No. It’s a time-consuming commitment, and if you’re on a busy schedule or have to choose between activities on a daily basis, watching the series isn’t worth it. It’s fascinating information, from all the controversy to the plain facts, but it’s not a life-changing experience. If you’re interested and have the time, take the time. If not, your life won’t be impacted. I’m a big fan of Dawson’s work and I look forward to see what he posts next.