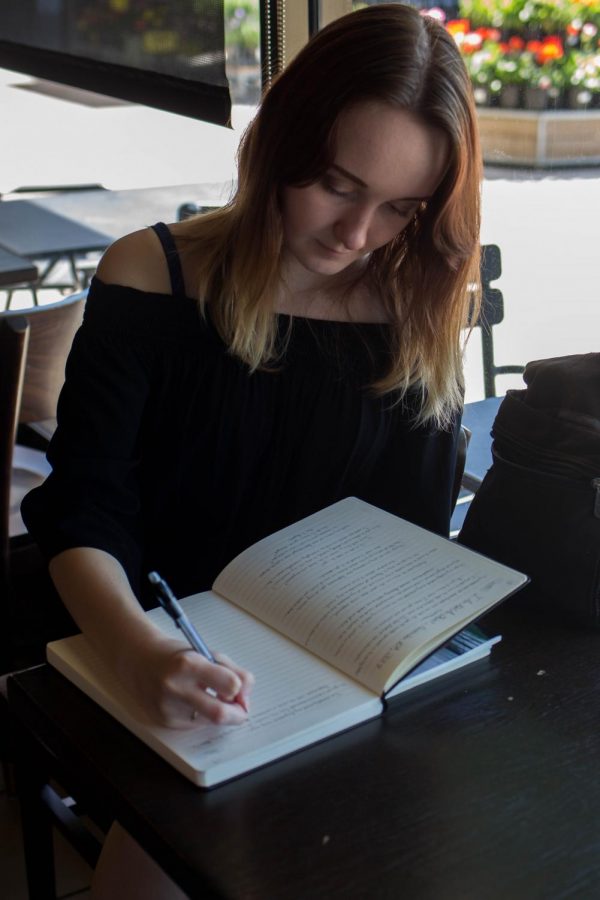 When first meeting Savannah Partridge, you would think she was your typical high school senior. However, overwhelming anxiety, self esteem issues and self-harming thoughts swim around her head, clouding the happy moments in life. Luckily, Partridge has found an outlet for her thoughts through poetry, but her journey to this discovery was quite a difficult one.

Starting at the beginning of high school, Partridge realized that her anxiety was different than that of her peers. While most students got anxious about one test or one big sporting event, Partridge’s anxiety was keeping her awake into the night, keeping her from participating in daily activities and overall impacting her life in bigger ways than she imagined. Eventually she realized this wasn’t right. It was in her first romantic relationship that she realized what gave her anxiety. When she was having off days, her boyfriend at the time would ask her questions like “why don’t you smile?” or “why are you always asking me if I’m okay?” For someone with anxiety, these types of questions can trigger negative emotions.

“He made me feel bad for caring,” Partridge said. The dynamics of this first relationship helped Partridge realize that she needed help. She began seeing a school counselor for weekly appointments and found it reassuring to talk to someone who could give her an unbiased opinion. Her parents have also been extremely helpful in her process of self discovery.

“I’ve been really lucky to have parents who haven’t hidden things from me, like the bad parts of growing up and I’ve been able to learn a lot from that,” Partridge said.

Partridge has struggled with anxiety for quite a while, but recently, self esteem issues have also surfaced.

“I keep overthinking about everything I do,” Partridge said. Sometimes these thoughts are so overwhelming that thoughts of self harm have creeped in. “It started sounding appealing but I don’t know why.”  Luckily, Partridge has poetry to turn to when life becomes too much.

“I tend to write about stuff that’s sad in my life just cause it’s easier,” Partridge said. She found her emotional outlet through writing both poetry as well as songs. Recently, she participated in an event hosted by Oregon State University Counseling and Psychological Services (CAPS) called Stories of Strength. This event was an opportunity for students to share how various art mediums have impacted them and helped them overcome mental health struggles. Savannah was the youngest participant at the event and it was her first time sharing her extremely personal poems with the general public.

“It was a great crowd for a first time to perform. I really enjoyed getting to meet the other artists there. There was also the benefit of performing for people that didn’t know me prior to the event, so their opinions they may have of my work is unbiased and fresh. It was exhilarating to release the feelings bottled in me with the words I write.”

Partridge has been an advocate for mental health awareness in her community and has already been able to make a meaningful impact on those around her. She is an active advocate for the Me Too movement at South Albany High School and has attempted to organize events as well as therapy sessions for students who have been sexually assaulted. At such a young age, Partridge seek to spread hope and understanding for others struggling with similar issues.

“You need to make sure you don’t keep yourself from feeling the things you need to feel in order to move on,” Partridge said.

“Admit to yourself the realities of any situation, if you need help, ask for it.”

One of Partridge’s most impactful poems is one that she performed at Stories of Strength titled Loudest in Loneliness. Centered around anxiety, this poem is incredibly impactful and gives an insight into life with anxiety.

How is that when I’m most alone,

With the contents of the bathroom mirror being my only company,

Is when everything is loudest?

When I’m left alone with my mind.

When my knees break and buckle,

My body sliding down the pastel purple wall by the rickety door.

The voices of my friends and family no longer nearby to distract my frontal lobe to keep the darkness in my mind’s closet locked.

When my surroundings are silent, the key is turned in that closet door, opening like Pandora’s Box, unleashing an army of demons to reign terror beneath my crawling skin, through the tunnels of my nerves and veins.

It seems that when I’m most lonely, Anxiety keeps me company; she forever remains as an uninvited guest in the Ribcage Hotel surrounding my heart.

In its rooms reside her friends, with names like Doubt, Hatred, and Depression.

Their neighbors are Faith, Love, and Happiness which I, as landlord, hear from on a frequent basis in leu of their troublemaking.

The Negative Nancy Three like to throw eggs at my heart, TP-ing my heartstrings in self-endowed lies.

The bones of my ribcage are graffitied and scratched with words that continuously remind me of my brokenness, enveloping my heart in solitary confinement.

They keep me from sleeping when my body lies down in bed, my mind elsewhere.

They stitch my mouth closed with my own needle and thread, keeping the sobs of my sorrow at the pit of my esophagus.

They pin my eyelids open with dark possibility in nightmares that lie in my pupils, showing me what they’d look like if they became a daydream-reality.

If I could get rid of Anxiety and her friends which tear me apart from the inside out, I would; but how are you supposed to detoxicate your body from what’s already a part of You?