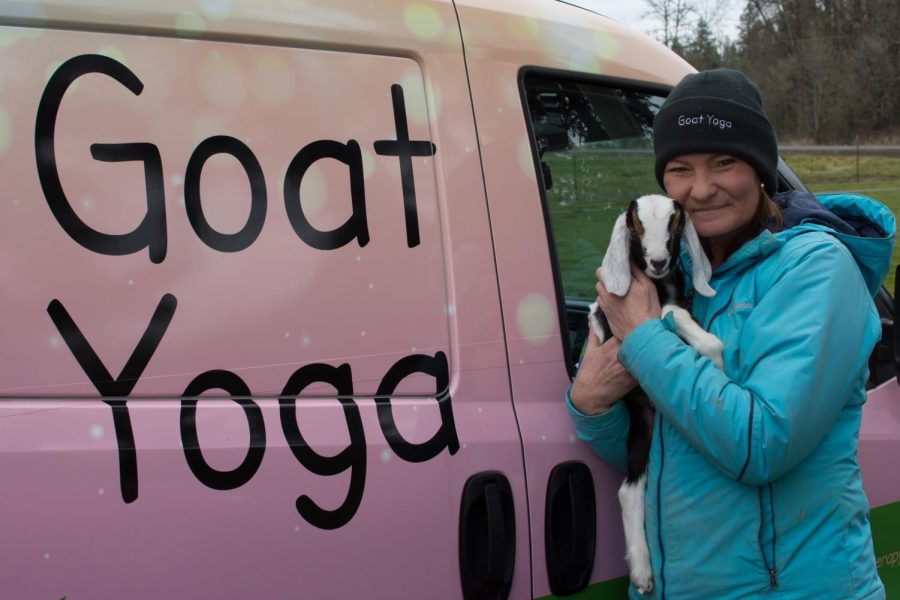 Yoga: a meditational form of stretching that not only relieves your muscles, but also your mind. It doesn’t get better than that, right? Fortunately, it does. A new world phenomenon has been born: goat yoga.

Goat yoga is exactly how it sounds. It is a yoga class held in an environment surrounded by goats. It is designed so that anyone can go and relieve their stress. By no means do you have to be good at yoga, or have any previous experience.

Kristin Griffin, a writing professor at OSU, talks about one of her experiences attending a class with her mother. She says, “My mom doesn’t really like yoga, but had a great time playing with the goats.”

How did this idea of mixing yoga, and goats, into one come about? In June of 2016, Lainey Morse and her mother Heather Davis, brought together their passions for yoga and their farm together. Morse had raffled off a kids birthday party on her farm for charity, and was looking out at all the goats and beautiful scenery with her mother when an idea sparked.

Davis, being a yoga instructor, had asked if she could host a yoga class on the farm for the party. Morse describes her reaction, “I started laughing and told her, ‘sure but you realize that the goats are going to be all over the humans!’”

Although at first it seemed like a crazy idea, it turned out to be a huge success. Morse didn’t have her first official class until Aug. 13th in 2016, and ever since then it has blown up. She now has three locations in Oregon and one in CA, PA, MI, NY, KY, CT, and IL.

Morse states, “I’ve got about a dozen in the wings waiting to sign on but I can’t handle so much so soon!”

There are a multitude of reasons why this has become so popular. One being, the pure joy and happiness people feel during class that then lasts with them for a significant amount of time after the class.

Morse describes, “The goats really have this sense of calm about them yet they’re also really funny. It’s a combination that just goes well with yoga.”

A common skepticism people have is the intimidation of yoga. Some people might feel as though they have to be perfect and do everything a certain way– whether that means the way they are breathing, or doing the pose. However, having the presence of goats around breaks away any tension.

Griffin explains, “With the goats around you can’t be perfect. You can pause and take breaks to pet the goats. It takes the seriousness and posturing out of yoga.”

Frequently, people don’t even participate in the yoga portion, rather, they come to play with the goats and have them sit on their laps. It is easy to interact with the goats, especially because they will walk through your legs, jump on your back or come take a nap on your mat.

The success of goat yoga can be attributed to the goats themselves for having funny, calming and loving characteristics. They provide a necessary sense of therapy and relaxation for many.

When asking Griffin what most contributed to the success of goat yoga, she says, “People are going through stress, mental health issues, disease and it provides them with a happy distraction. Not many things give people such a happy distraction. And with the world of politics being so stressful with negative news and war, people just love having an escape.”

Goat yoga is perfect for a break from reality and the stresses that life throws at us. It gives you the opportunity to enjoy the little things in life, being yoga and goats, and to be in tune with your happiness.

If you are looking to give it a try yourself, there is a goat yoga location close to campus that offers a student discount for $10 off! To get more information check out their Facebook page The Original Goat Yoga.