People, Parties and Purim: A Glance Into Oregon State’s Hillel 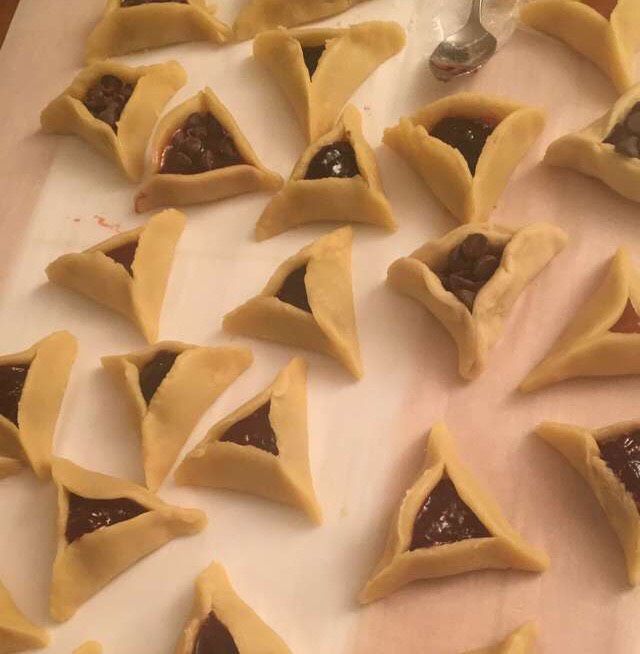 A group of students gather together on a Wednesday night in a small living room, creating cookies, gift baskets and memories.

This group of students are known as Oregon State University’s Hillel. Hillel, under the Oregon Hillel Foundation, is a Jewish student organization on campus that provides a place for Jewish students to connect with other Jewish students, allies and supporters.

The previous President of three years and current Vice President of Communications Leah Chasin said, “We are a Jewish student organization based around holidays and we host programming for Jewish students.” The most recent holiday to be celebrated in this community includes Purim.

Current President of Hillel Lou Griffel explains Purim as, “Celebrating escaping getting killed as a religion, race, and community. We dress in costumes and have parties and send out gift baskets called mishloach minot. This is our holiday of giving. In Israel, they give out large baskets in shapes of triangles because of Hamantaschen.”

Hamantaschen are triangular shaped cookies with filling, usually of the jam, chocolate chip or poppyseed variety. They get their name from the story behind Purim. Jackson Anderson-Kovacs, a birthright intern for Oregon Hillel, explains in an email that, “Celebrating Purim consists of dressing up like it’s Halloween, giving to charity, eating lots of food, drinking lots of wine and reading the book of Esther, otherwise known as the story of Purim. It is a celebration of the salvation of Jewish people in ancient Persia from Haman’s plot to annihilate all Jews.” Hamantaschen are named after Haman because of his triangular ears, hence the triangular baskets and triangular cookies.

“A big aspect of hillel is community. The hamantaschen bake was a cool way to introduce people to Purim and create gift baskets for friends and faculty,” Griffel said. The hamantaschen are such a large part of Purim so it is a way to connect through food. Chasin said, “It’s not Purim without Hamantaschen.”

Oregon State University’s Hillel also holds other events such as Shabbat dinners and caffeine kickoffs every Monday from 9 a.m. to 11 a.m. at Java II. These events are a way in which Hillel reaches out to people around campus and spreads the word to people throughout the OSU community.

“The community and connections are great. Oregon State has a really strong community value base,” Griffel said. OSU’s hillel group has vastly grown since it began a few years ago. “When Hillel first began at OSU, there were about five to ten regular members and now there is a core group of about 50 or 60 of us,” Chasin said. The community is continuously increasing and is inclusive to anyone who is interested in learning more.

Griffel’s goal is to “engage with the community and make sure Hillel is recognized on campus.” Hillel offers students the opportunity to learn more about Judaism and to attend events around campus. Anderson said in an email that, “After getting involved with Hillel, I am now a part of a very strong and supportive cultural community in Corvallis; I now have a Jewish home away from home.”