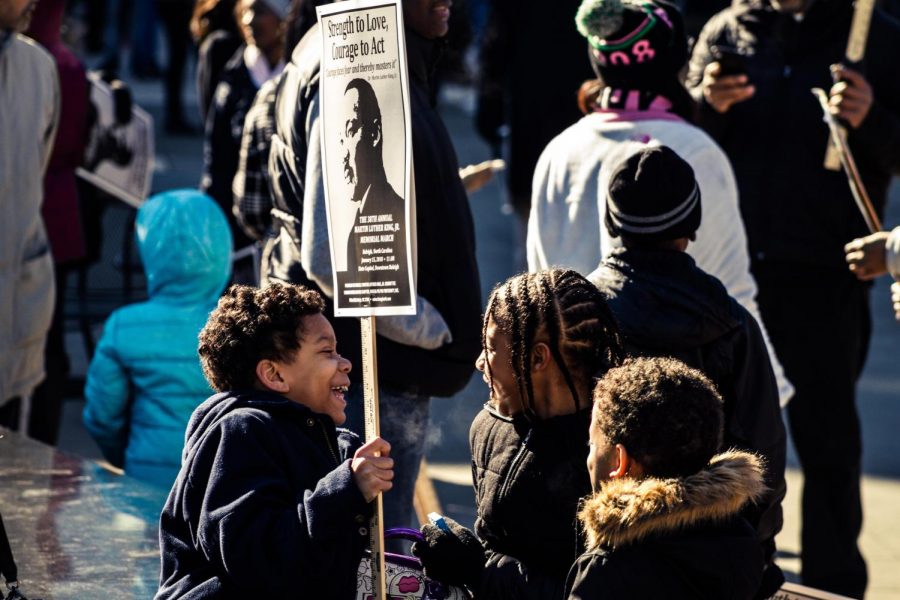 February is not just a month filled with candied hearts and roses, but a month that shines a light on the history and oppression of the black community. Black History Month has a different meaning to everyone, and for Dwaine Plaza and Jamar Bean it is a month of forgotten memories.

Plaza is an Oregon State University Professor of Sociology and the Dean for the College of Liberal Arts. The school year of 2018 marks his twentieth year with OSU.

According to Plaza, within the school system, there was an idea to create periods to recognize oppressed groups. These periods reflect on the challenges that they faced in history, and still today. The problem with that, according to Plaza, is that it is only one single month out of an entire year. After that, society moves on.

“That’s very problematic in my mind,” Plaza shared, “Why can’t we recognize all groups during all months?”

Plaza refers to these periods as touch points. Society remembers all the unfortunate events for this short period of time, then once the month is over, a switch is flipped and society moves on to the next oppressed group. “I hate to say it, but if we did not have it, then in the United States, people would not necessarily take the time to recognize history,” Plaza expressed.

“The award was to honor black staff and faculty on campus, and recognize the work we do to help support our black students on campus,” Bean said.

Bean recognizes that OSU tries to incorporate a variety of events to celebrate Black History Month, but he is hopeful for a campus that can embrace a celebration of black history year round. “OSU is a predominately white campus so there is a limited representation of black students, staff and faculty,” Bean said, “So being well represented as a whole can be challenging on our campus.”

The idea that Black History Month is a time to recognize the achievements of the black community, but according to both Bean and Plaza it should be celebrated 365 days a year.

“I personally think black history is America’s history, and therefore should be celebrated every month,” Bean said, “The capitalistic foundation of our country was built on the backs of slaves, my ancestors.”

As a child, Bean would get excited about Black History Month. As he got older he came to realize how much he was not being taught in school. “Growing up I would push my teachers to expand the Black History Month content past the typical MLK and Rosa Parks lessons,” Bean said.

Throughout Plaza’s 20 years at OSU, he has watched the campus and community go through waves of consciousness. According to Plaza, over time senior administrators have acknowledged that everybody should have a level of awareness on these issues.

“Every college campus has these band-aid type fixes for when problems flare up,” Plaza said.

Plaza made reference to the recent incident with OSU’s student government, ASOSU Graduate Chairman, Andrew Oswalt. Oswalt expressed views and ideologies that represent those of a white supremacist. In Plaza’s opinion, removing Oswalt from campus was a band-aid fix on a larger issue at hand.

“The sexism, the homophobia, the racism is not only an individual,” Plaza said, “In reality, he [Oswalt] is replicated many times.”

In many cases, even at OSU, the solution has been to isolate the problem, remove it, and then business is back in order, Plaza explained.

“We as a campus need to acknowledge the fact that a white supremacist ideology exists among everyone,” Plaza said. In a society that stems from a white supremacist viewpoint, the concept unconsciously sits in the minds of society, according to Plaza. Because the foundation of our nation was built on the ideology of white supremacy, subconsciously we carry this ideology with us and it is implemented throughout our society.

“People of color also grew up reading certain history books, and grew up with a white supremacist culture,” said Plaza. “The curriculum that they were exposed to was very much white supremist as well as the movies they watched.”

Some examples that Plaza gave to support his point were skin bleaching cream, hair straightening, a desire to have children who are of a lighter skin tone, and choosing partners of a lighter skin tone. “These ideas do not just come directly from a white supremacist, like this Oswalt guy,” Plaza said. “That was already a part of culture, he just absorbed a part of that.” Plaza said these ideas have been around for a long time and will remain within all cultures because society refuses to have a conversation about the issue.

Not a single college campus has a faculty that has an equal representation of minority groups, according to Plaza. “There are some students, because of the field they are studying, will never see a person of color, or a female instructor, or an LGBTQ professor,” Plaza said.

Plaza stated there is a flaw in the hiring process. It is all too common for individuals to want to hire people who are just like themselves. That makes for a less diverse faculty. “The excuse of not being able to find qualified people is not true, it’s that they can’t find people who look like them,” Plaza said.

For Plaza, the only way to move forward is to remember the past and reflect on the oppression and suffering that has been and still is.

“This is why I always tell my students to never forget history,” Plaza said.

Photography by James Motter via unsplash.com