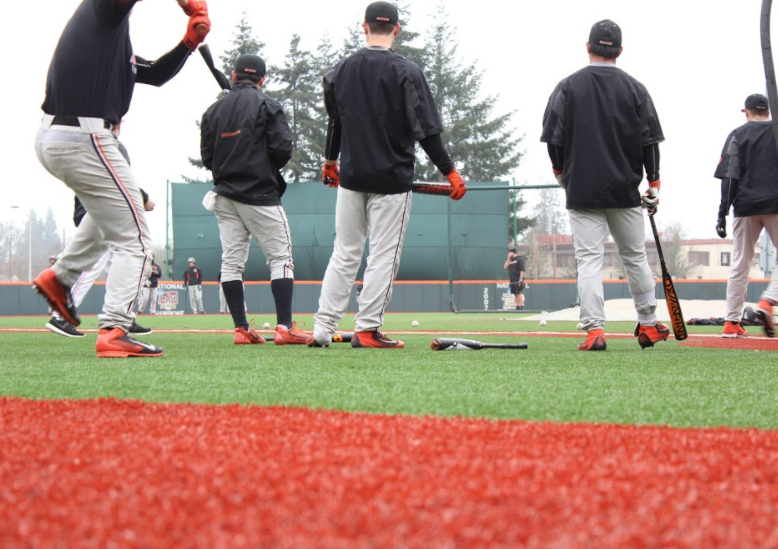 College sports are one of those things that can either make or break a school. A win has the power to bring the students of a university together, but a loss can cause the unity to fail.Oregon State Baseball has had the ability to overcome losses and continuously provide unity, victory after victory, battling back in rubber matches and holding strong in games down to the wire.

With the first Civil War sweep either team has achieved since the reinstatement of the Ducks Baseball team in 2009, unity and determination secured the PAC-12 title, Coach Casey’s 1000th win and the ninth PAC-12 series win this season for Beaver Baseball over the last weekend.

Game one at PK Park on Thursday ended with the Beavers victory at 6-1, but the true pressure would lay on game two the following day. A win for the Beavers in the second game of the series would secure the series win–the ninth PAC-12 series for the season and eleventh in a row since last season–and would be Coach Pat Casey’s 1000th win in 30 seasons.

With no clear lead throughout the game, the two teams were battling for the W. Coming down to the wire, Oregon State was up 5-4 in the bottom of the ninth, looking to establish the victory they so desired. With all of the bases loaded, two outs and a full count, a last strike would clench the victory. Mitchell Verburg had the pressure on his shoulders, and with the perfect pitch, he struck out the last batter to finalize the win.

Game three on Saturday was an opportunity to acquire the elusive sweep, a feat yet to be achieved by either team since 2009. As a team with some of the best pitching and defense in the country, every run is valuable for the Beavers. In the top of the fourth inning, Christian Donahue walked, but was followed by a flyout to center field by Trevor Larnach. After a strikeout swinging by Michael Gretler and a stolen base by Donahue, scoring position was again within the Beavers’ grasp. Despite two outs, Cadyn Grenier’s clutch single that followed brought Donahue home, giving the Beavers the lead at 1-0. A spectacular diving catch by Steven Kwan in the bottom of the seventh inning highlighted one of the several spectacular defensive plays the team has showcased throughout the entire season and during game three of the series.

With the season growing more difficult from the pressure of regionals and super regionals around the corner, it’s impossible to deny the continuous strength and composure the team has displayed weekend after weekend. Coming up on week eight of being the consensus #1 ranked team in the nation, Beaver Baseball looks towards their last PAC-12 series this upcoming weekend and the NCAA tournament selection fast approaching with a date set at May 29th. The road has been long and the team has battled weekend after weekend to establish their strength has a true competitor after being cheated from the tournament last season. Oregon State Beaver Baseball has made history before, and continues to make their determination clear and powerful.