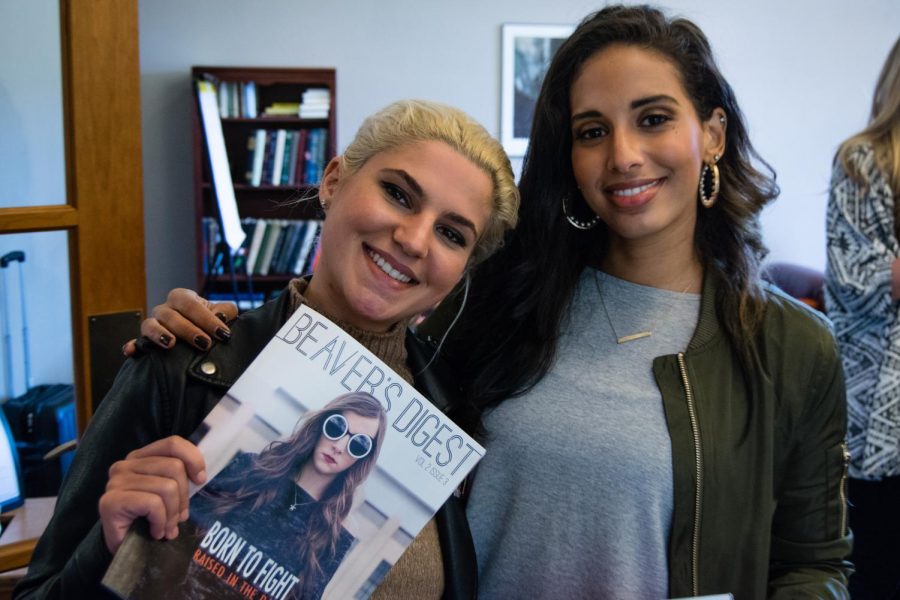 Recently, BD had the opportunity to catch up with MTV’s Girl Code stars Carly Aquilino and Nessa Diab while they were visiting Oregon State on their last stop for the Perfectly Imperfect initiative presented by Her Campus. Our conversation with the pair was full of laughs and good vibes. Check out what the girls had to say!

BD: What attracted you to the [Perfectly Imperfect] initiative?

Carly: “[Perfectly Imperfect] in general, it’s definitely about emergency contraceptive and Plan B, which I think is important especially to college students and girls in that age range—it’s so important to know what your options are so I think that’s what really made me want to be involved with it. Even not related to emergency contraceptive, just in life in general, things don’t happen the way you expect them to so it’s kind of a positive message to send out and so people have the knowledge and can spread it amongst them and their friends.”

Nessa: “Yeah that’s what makes the Perfectly Imperfect campaign so awesome. It’s not just only emergency contraceptive, which is obviously the main point—understanding your options after nights you don’t remember, right? But it’s also about preparing your self worth, you know your love for yourself and realizing that it’s okay not to be perfect, it happens to the best of us. That’s just life and you need to learn how to cope with things not going your way because we all can’t just pout and make things happen. I think [Perfectly Imperfect] just embodies everything and it empowers women, and also men and really just humanity to understand one another and what our options are.”

BD: What has been your favorite experience with the Perfectly Imperfect campaign?

Nessa: “We’ve met really cool people, interesting for sure. It’s been really fun, a lot of times we see people hit us up on Twitter or Instagram, to finally meet them in person is nice. It’s just nice to put that face to the Internet person.”

BD: Has [Perfectly Imperfect] been all over the country?

Nessa: “Yes, it’s been all over the country from Chicago to Florida to—“

BD: Since this was your first visit to Oregon State, if you were ever going to visit again or you were to tell someone what to bring, what would be one thing you would suggest packing?

Carly: “A hat. A scarf. We have all of the [merchandise] from the [OSU Beaver] store.”

Nessa: “Shout out to the Beaver.”

Carly: “Shout out to the Beavs. Justin Beaver. I think his name is Justin Beaver and I’m going to keep calling him that because people keep saying ‘the Beavs’ and I’m like, ‘Oh, the Biebs’. That’s what I keep hearing because I’m like obsessed with Justin Bieber. That’s a whole other story.”

BD: What is your favorite thing about Corvallis?

Nessa: “It’s beautiful. It’s just really pretty. I didn’t think places like this existed in real life, like it’s so pretty. I thought this was like ‘Oh post card kind of stuff’. I would never see this so it’s really pretty.”

Carly: “It’s beautiful. The grass is green, the sky is blue—oh isn’t that a Beatles song? It’s gorgeous.”

BD: If Corvallis was an STD, which one would it be?

Carly: “Probably Crabs because you can get rid of it.”

Carly: “Mono. I don’t think that’s an STD though, that’s just Mono. I got Mono in sixth grade before I ever kissed a boy.”

Nessa: “She was out there.”

Carly: “I really wasn’t. I remember my brothers were like, ‘You kissed a boy’ and I was like, ‘No I didn’t!’ I couldn’t go to school for like four months, I was so happy.”

BD: What inspired each of you to do what you are doing now?

Carly: “Well, Nessa does radio [and] I do stand-up. I’ve been doing stand-up for about five years. It was always something that I wanted to do; I wanted to get involved with. I was working in a hair salon—I was a hair dresser for a little while from when I was in high school until after that and I was just like, ‘You know what? Let me just try it and do open mics and try and like make this a thing. If I hate it, I never have to do it again’. So I did it and I loved it and that was kind of how everything started.”

Nessa: “For me, I started in radio. I went to UC Berkeley and that’s where I started my radio career so I bounced all around trying to get a full-time job in radio. That’s been eleven years I’ve been doing [radio] and so now I broadcast live on Hot 97 in New York, which is the biggest hip-hop radio station and most legendary radio station in the world. It’s the first station that gave us hip-hop music full-time. I’m syndicated now so the shows great and I get to host the after shows on MTV, like Teen Mom and all of that good stuff.”

Nessa: “The good ole stuff. So luckily through my radio interviews, that’s how MTV found me. This is what I do and then stuff that I enjoy doing is empowering other people to want to better themselves and come together and uplift one another. That’s like my first love, helping people and being involved in the community. That’s another thing for me, and Carly, we actually care about people so to do [Perfectly Imperfect] to provide knowledge and to help people know better facts and the truth about things is really good because there’s a lot of lies out there. It’s good to be able to spread good knowledge.”

BD: Do you still get nervous for events like [Perfectly Imperfect], or anything?

Nessa: “I like these events because it’s nicer, there’s not as much pressure for us to perform, you know what I mean? I still get excited.”

Carly: “I still get like anxious. For stand-up, I get anxious, or get that like pre-show jitters. I think that always happens and I think that’s something that means that you love it. If you don’t feel nervous, you don’t care about it enough. Of course you’re putting yourself out there and I think that what we do is a really vulnerable—what each of us do is really vulnerable. [Nessa] is on the radio, I’m on stage and we’re just talking and it’s a connection that you want to have with people.”

BD: What are your top three dating tips for millennial’s?

Nessa: “No that’s not true, Carly is a great friend—“

Nessa: “First you need to have great friends around you because they’re going to be honest with you, like you need to know for sure that [your friends] want the best for you. You need to love yourself before you can love anybody else; I know that sounds cliché. The third thing is being honest. Either [a significant other] is going to accept you for who you are, or they’re not so you don’t need to play a part to please them.”

Carly: “Yeah, I ask Nessa about anybody I date. I’m like, ‘Should I go out with this guy who has three tattoos on his face?’”

Nessa: “I was really upset about that one. And guess what, he never called her back.”

Nessa: “Yeah, uh—it is. You have to be able to express what you like and here’s a key guys, this is like the biggest gem you will ever get in your life: when a guy does something you like you have to make a big deal. Be like, ‘Oh my gosh, wow! You are the best. This is amazing. This made me feel so special, you’re the best!’ Do that when they do something nice. You over emphasize how amazing it is and they usually get the hint from that.”

BD: What is your favorite app?

Carly: “My favorite app is Instag—SnapChat.”

Nessa: “Your favorite app is SnapChat?”

Carly: “My favorite app is probably SnapChat because people on Instagram are mean to me and I always am reading their comments. SnapChat, sometimes I can’t open all of [their comments] because they expire.”

Nessa: “You know, I could see that. I don’t use SnapChat enough because it’s too much of a time commitment.”

Nessa: “But [Carly] agreed, we’re done with the karaoke like look at yourself—“

Carly: “If I see one more SnapChat of a girl (pretends to selfie-sing into phone)—I’m over it.”

Nessa: “You know what’s so funny? I’m like over apps right now. I feel like this the prime time for someone to come in and have something really, really dope because nothing satisfies—nothing like ‘Oh, I can’t wait to refresh!’”

BD: What song can you currently not stop listening to?

Carly: “I’ve been listening to a lot of Rage Against the Machine, but these songs came out in 1993.”

Nessa: “Because I do radio, I hear everything over and over so probably nothing.”

Nessa: “Yeah he hasn’t put new music [out], but he’s a solid artist to me. Rihanna is a solid artist, but if I hear Work one more time it’s gonna be a problem. You know what I mean?”

Nessa: “When you have the option to turn it off, I don’t.”

BD: Is there any closing advice you would like to give to those pursuing media careers or following their dreams in general?

Carly: “If you fail, don’t get discouraged. It’s not the end of the world and keep doing what you’re doing because there’s so many people that want to see you grow and it just feels good to succeed. No matter what level you’re at, you’re going to have obstacles and things in your way that don’t work out the way you want them to. If you just keep at it, you’ll be happy because you’ll be ending up doing what you want to do.”

BD looks forward to hearing more from Carly and Nessa in the future. Be sure to check our social media for exclusive video footage from our interview!

Interview by Brittni Cooper and Maddie BradshawPhotography by Aaron Trask