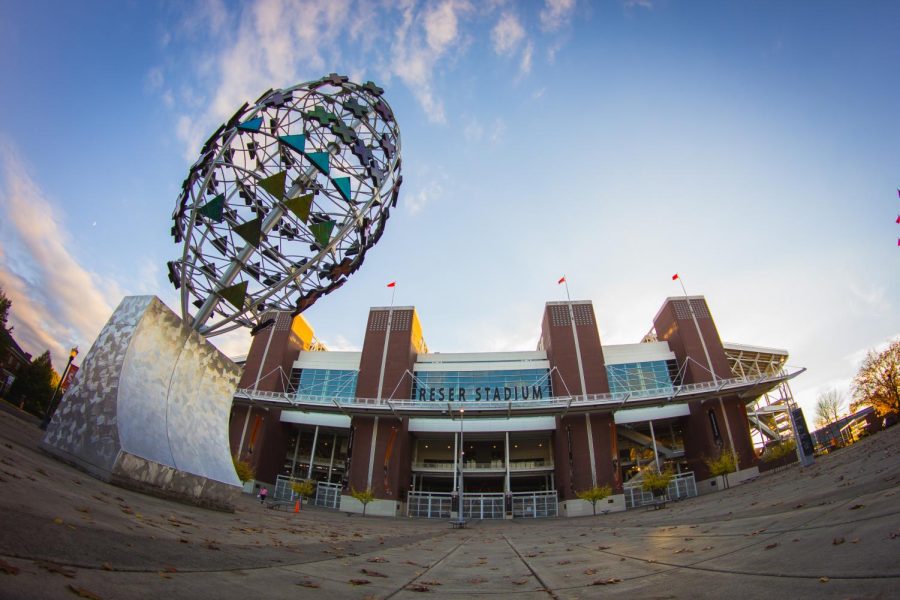 Game Day. For about twelve weekends during the year, colleges across the nation experience something beyond explanation. Campuses, rivals, tailgates, family; nothing can fully describe what it means to a community and student body to come together for college football and the sacred holiday of Game Day.

This year, Oregon State University has seven weekends where we have the experience of game day here at home, with four remaining in the season. Game Day is something awe-inspiring and spectacular. From die hard fans to screaming students, from alumni to players and coaches; everyone plays a part.

Carlee Quade, a freshman with a major of Education and Sociology, described game day in one word as, “Packed”. This is not surprising considering the fact that game attendance hovers around 40,000 fans for a campus with about 25,000 undergraduate students.

Junior Cory Christensen, a student with a major of Chemical Engineering, describes the day as, “Crazy, if you’re in the student section”. He also commented on the unity game day creates for OSU and the city of Corvallis, “I feel like it brings everyone together. Whoever wears a t-shirt, you can talk to them about it.”

Freshman Chris Henry, who plays cornerback and has elected to be a redshirt for this football season, commented on Game Day being about “Focus” and what makes it special to him as, “Preparation and hard work put in before, getting to see it pay off”.

Chris Mengis, a sophomore and redshirt freshman who plays as a defensive tackle for the football team, described Game Day as “Hype, real; the real deal, it’s not just practice anymore”. When asked about his rituals as a player, he mentioned how he listens to the same song, Red Opps by 21 Savage, every game day and will not text anyone two hours prior to the game beginning.

Sophomore Brett Browning, whose major is Bio with a pre-med option, summed up game day simply as “Amazing” and “Electric”. He then noted his Game Day tradition to be, “Every Saturday, I go and get calzones then go watch the game”.

Game Day gives a different impact on every person on campus and Corvallis, but that’s what makes it so special, so unique, so, well, “electric”. It brings together a student body and town in ways no other event has the capacity to do. The season record doesn’t matter. The weather won’t stop us. Because hey, it’s our team. It’s our home. It’s our family. And we bleed orange and black through our core every time those players step out onto the field and we experience the wonders of Game Day.