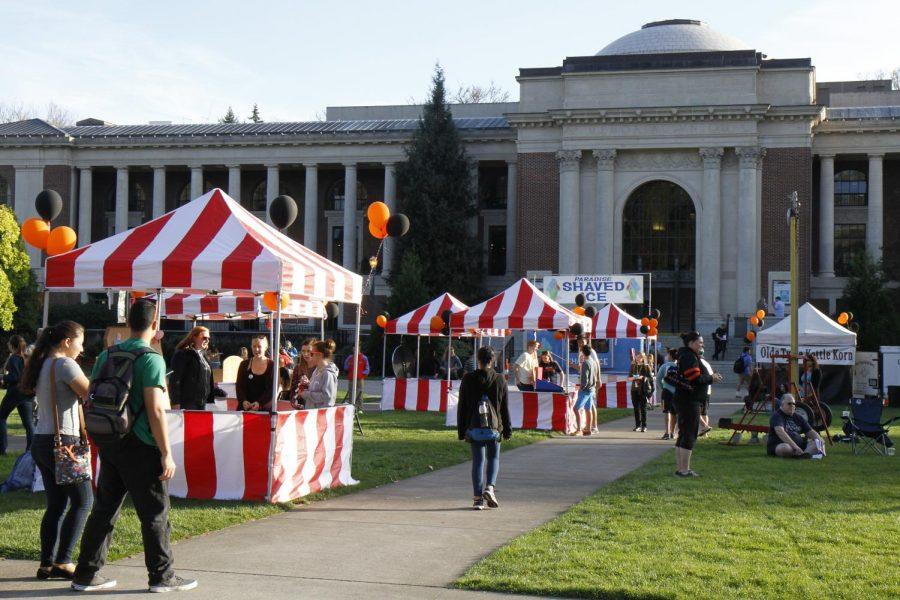 And so it begins, Halloweekend and Homecoming. With a national holiday and a sports holiday falling on the same weekend, there’s no doubt that events will be happening for everyone. Carnivals, competitions and costumes all lead up to the Homecoming football game on Saturday versus the Washington State Cougars. Here’s a run-down of the major events not to miss this Halloweekend.

The Oregon State University Alumni Association plans several activities and events for the Homecoming side of things during the weekend. To get the festivities underway, the Homecoming Carnival begins Thursday at noon in the MU Quad and continues until 5 p.m. Activities include free games, giveaways, and a celebration for Benny the Beaver’s birthday. Don’t miss the chance to join Benny for his birthday fun!

Not only is Benny celebrating his birthday this weekend, Dixon is celebrating 100 years of on-campus recreation. Two open house events will happen this weekend to commemorate the occasion: one from 2 p.m. to 4 p.m. on Friday and a second, which is both an open house and tailgate event that begins two hours before kickoff on Saturday. Both open houses will be at the Dixon Recreation Center.

Friday night the Beaver Bash begins at the MU! Part pep rally, part tailgate: all fun. It kicks off with head football coach, Gary Andersen, football players, and cheerleaders pumping students up for the game Saturday. Tailgating, food and games start directly after the pep rally. The pep rally begins at 5 p.m., and the bash continues from 5:30 p.m. until 9 p.m., with the tug-of-war tournament happening from 6 p.m. until 9 p.m.

The football game Saturday tops off the Homecoming festivities for the weekend with a 7:45 p.m. kickoff time. Coming off of the tough loss at Washington last weekend, the Beavers are biting at the bit to return the favor for another Washington team, this time to the 5-2 Washington State Cougars. With this as the 101st meeting between the two teams, OSU is looking to close the thin margin behind the Cougars in the total of their meetings, where Washington State leads at 50 wins followed by OSU at 47 wins, and a total of three ties. The Cougars are on a two-game winning streak against the Beavers and are projected to win the game by 17.5 points, but the Beavers won’t let the odds stop them. In fact, they were projected to lose to the California Bears by an average of 13 points, but beat those odds set against them. They’ve beat the odds already this season, and are determined to continue doing so. This is not a game to miss.

Whether you’re a Homecoming, Halloween, or Hallow-Hoco-Weekend person, there is definitely something this weekend for you. Enjoy the fun and festivities after a week of midterms; we all know you deserve it! Be safe, have a blast, create memories, and make the most of this year’s Halloweekend and OSU Homecoming!