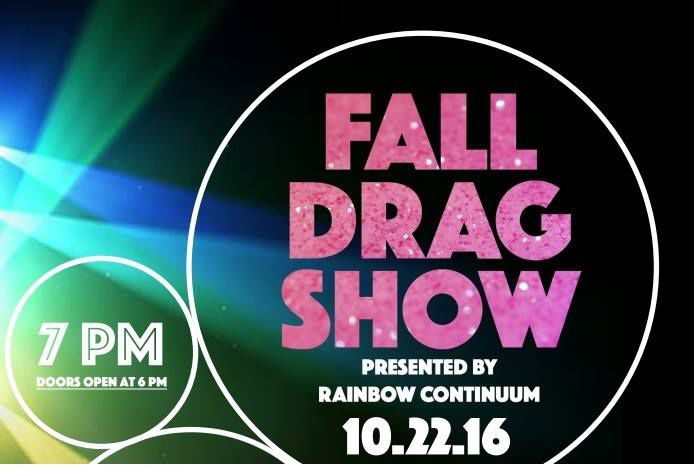 On October 22, 2016, Oregon State’s Rainbow Continuum held the annual Fall Drag Show at The LaSells Stewart Center. The hosts of the night included Carmen Sutra, Jean Luc Pricard and Caesar Gently. If you were unable to make it, you missed out big time. Here is the recap of a night filled with dazzling performances.

Vickie Zeller, the main organizer of the Fall Drag Show and Rainbow Continuum, opened up the night with a short introduction summarizing what was to come as well as thanking everyone who helped make the show a reality. The evening of performances was split into two parts with an intermission time and an audience questionnaire panel discussion in between parts.

Here is how part one played out:

After a return from intermission, the audience was allowed the chance to ask questions to a panel comprised of Carmen Sutra, Miss Dharma Prada MacPherson and Lucielle S. Balls. This was a comical reflection of what it means to associate with drag performance, which included as many moments of laughter as it did snaps and applause in response to introspective, impactful remarks about the truth of the drag community.

Part two is where the night pace turned into a deeper, more sensitive expression of drag. A definite highlight of this second half was an astonishing rendition of Destiny Child’s song, “Stand Up for Love” by Carmen Sutra, in which Carmen actually sang the lyrics and left the audience in awe. The message, standing up for love, was driven home when Carmen concluded the performance and was met with an entire audience standing in applause.

Another highlight was a benefit performance from Julius Blount, in which all proceeds went towards a scholarship. A majority of the audience stormed the floor to celebrate the good times going on and to support the messages of the night. Upon ending, Julius broke into tears in response to the massive participation. The shared feelings of love and acceptance were very apparent at this moment.

The other performances of part two were comprised of an appropriately sassy lip sync from Xmin, a flawlessly fun execution by Miss Queeries, an expressively sharp interpretation from Cherry Top, a romantically unique, sporadic performance from Lucielle S. Balls, a bold punk-rooted display from Esmeralda Dharma LaChance and a very interactive ending performance from Miss Dharma Prada MacPherson. At the close of the night, all performers came out to give a curtain call where they received a standing applause from all members in the audience.

On the purpose of the Fall Drag Show, Vickie Zeller remarked “All performances are in some shape or form of gender expression. It really varies and depends on the performer”. While performers bring everything home, the show is made into existence by many people as was noted by Vickie stating that, “Planning for the drag show usually takes 10 weeks or so. At least 10 weeks before the show we set up a backwards timeline so we are able to ensure we hit all of our checkpoints to get everything done in time”. Make sure to keep your eyes open for the next upcoming drag show as it is sure to be another memorable night!