Dancing to the Rhythm of Life 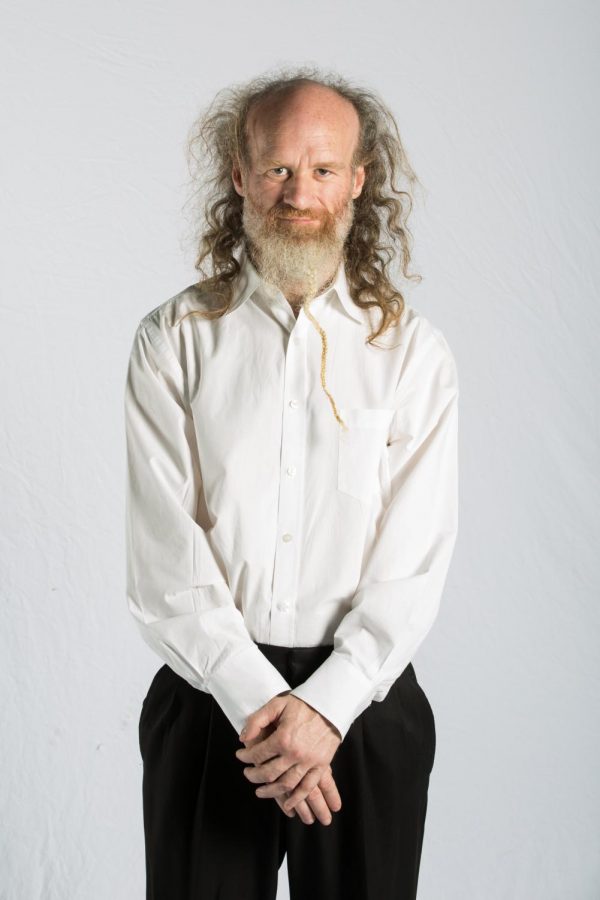 If you’re a resident here or student at Oregon State University, you’ve certainly witnessed “Dancing Mike” grooving his way around town and campus if not stopped to joined him in a dance. To those new here, Michael is a campus icon nicknamed “Dancing Mike” popularized for showcasing his uniquely fluid dance-style in town for the past five years.

The first time you walk by “Dancing Mike” twirling his jacket and breakdancing on the sidewalk, with his shaggy mane and bubbly disposition, it might be a little frightening. In our society we reserve dancing for “appropriate occasions”, and any violation of this social standard sticks out and can even make some people uncomfortable.

After a few encounters, Michael’s dancing can become more of a day-

brightening novelty, and less off putting. To see someone enjoying themselves despite fear of judgment can naturally bring a smile to your face.

Although widely profiled in newspapers and video segments for his dancing “novelty”, a look behind his past and daily life gives one much more meaning to the celebrated persona of “Dancing Mike”, and to the motives behind his craft.

Michael Joseph Ambrosius, better known as “Dancing Mike” was Born in 1971 in Lawton, OK, but spent his adolescent years growing up in New Mexico after being adopted at the age of three. While a stable home might seem commonplace to most people, Michael struggled to find a wholesome living environment in his early years. “I had a really, really strict adoptive dad who was ex-military. We didn’t exactly get along” says Michael. “I was physically abused at a very young age, and had four seizures.”

After enough was enough, Michael moved in with his adoptive grandma whom he lived with until he was 19 years old. Before passing due to emphysema, she served as a mentor for a troubled and damaged Michael. She taught him to read and write, and his first dance routine; “The Heel-Toe”.

At the age of 19, Michael moved to Oregon to live with his sister and graduate from Monroe High School. He reflects on the transition away from his adoptive parents as a huge turning point in his growth.

Although he escaped the speckled past he left in New Mexico, he was far from unscathed. The abuse-induced seizures Michael endured at such a critical time in his development left him with a disorder that renders him unfit to work and dependent upon government funding.

Despite his financial situation, Michael married young and welcomed his son, Toron Ambrosius, in 1998. Due to what Michael describes as “inconsolable differences”, Michael eventually divorced. Although he had agreed on joint custody of Toron, Michael was left alone to foster young Toron as a single parent for much of his youth. Despite the anxiety of raising a kid on disability benefits in the aftermath of a divorce, Michael somehow managed.

“I tried not to make the same mistakes my dad did. The point of life is to learn from other people’s mistakes and learn from your own…” said Michael. “I had CSD [clinical depression] in my life because I was trying to mentally take care of a kid while dealing with divorce… when you have a kid you’ve got no time for depression.”

When his wife was able to begin gradually taking more responsibility in Toron’s life, thing’s really started to change for Michael. Unsure of what to do with more time on his hands, he found himself searching for boredom remedies. With little money and no plan, he took to the streets of Corvallis to kill some time. When the music from a Corvallis club peaked his interest, Michael entered the live scene and simply did what came natural to him “…I went and found myself at the balcony of Impulse [Bar & Grill]. The bouncer kicked me out, so I came back next week!” says Michael. “All of a sudden I was reminded of all the things I used to do as a kid. I just started dancing on the sidewalk because, I felt like doing it.”

Unbeknownst to Michael, his sporadic decision to follow the music at Impulse that night would lead to an entirely new persona for himself. Taking no discouragement from the bouncing staff, Michael continued to perfect his dancing, practicing on whatever stage he decided to make for himself in town. He explains developing his wacky dance style was mostly through improvisation, but he also drew from swing-dancing and salsa influences he experienced in New Mexico’s dance cultures, as well as break dancing and rock & roll influences he picked up as a child of the 80s.

Dancing requires letting go of inhibitions, forgetting the fear of being judged. Most people will dance when they’re comfortable, but dancing on a sidewalk in midday sounds like a nightmare. While most spectators get a kick out of Dancing Mike, others simply can’t deal with the societal norms they feel he violates. “I’ve had people been so insecure that they will attack me because they’re uncomfortable” says Michael. “I’ve heard I’m crazy, I’ve heard I’m gay, I’ve heard I’m homeless. If I stopped to worry about what everyone thinks, I won’t be me anymore. ”

Ignoring the negative feedback, Michael stuck to his craft and has gained great support in the community in the last 5 years of public performing. mSince his leap out of boredom, his ventures around town have earned him a huge spot in the heart of Beaver Nation. He’s been profiled numerous times by  local media, performed in Greek affiliated dancing competitions and festivals, and has even invited to college house parties on a regular basis.

Everyone has those moments where they’re randomly inspired to get up and dance, and Michael likes to help people act on those impulses more often. “[people] put a lot of shame and guilt nowadays to things that don’t have shame or guilt to them” says Michael. “When they get rid of the worry of what they’re doing or how they look or whether or not they’re doing something wrong, they dance beautifully”.

When he’s not dancing, Michael spends his time without much of a plan. You might catch him surfing Facebook with his three-hour guest pass at the Valley Library computers, or maybe making friends along Monroe Ave. and Interzone Café. At home in his small one bedroom apartment in Corvallis, Michael passes the time playing Xbox or watching television. Except the occasional visitors on holidays, Michael says he likes to live a pretty private life outside.

Dealing with tendinitis in his legs since the age of 24, Michael is definitely slowing down these days with dancing. He aims to dance as long as possible, but admits he can’t keep being “Dancing Mike” forever. “I told one interview that I’ll probably retire and it got taken the wrong way” says Michael. “As you get older you do things at your own pace. I haven’t done it as frequently as I used to because I want to continue to dance.”

In light of a possible end to his time as “Dancing Mike”, Michael encourages people to understand his story and look past his dancing as solely a form of entertainment or novelty. When you review the and hardships he’s endured and see him busting a headstand and smiling on a street corner, the message Michael dances for is clear.

“There are times when I’d just like to walk in town. The whole point of me dancing is to inspire people to actually enjoy life and do what they want to do, not what everyone else wants them to do” Michael says. “Life’s going to throw adversity at you and if you can accept yourself for who you are and all of the adversity, the fact that you’re still dancing means you’re not afraid to be yourself.”