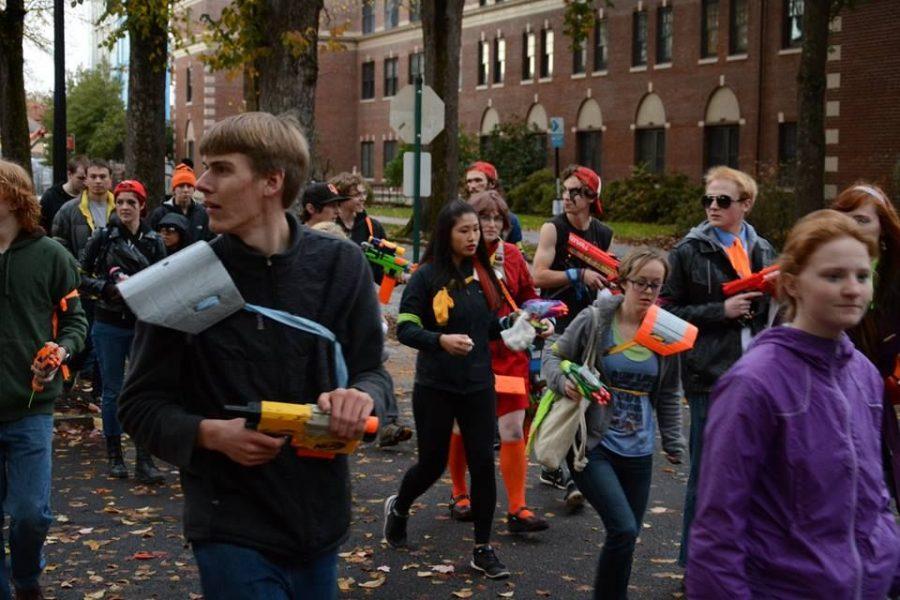 For both the players of the game and the moderators that run it, the planning begins months in advance. As the moderators are drafting mission ideas, the players are calculating escape routes from the buildings they have classes in. Squads begin to form, the advertising and outreach campaigns begin and finally, on a cold Thursday midnight, the players assemble outside the library to count down the minutes to Humans Vs. Zombies [HVZ].

HvZ is a biannual, nine day long game of tag that has developed a following in the seven years it’s been at Oregon State. As the name suggests, there are two sides to the game, the humans and the zombies. Humans have to make it to the end of the week and zombies have to make sure that doesn’t happen. Humans arm themselves with Nerf blasters, balled up socks and marshmallows. They can stun the zombies in their tracks for fifteen minutes at a time. If a zombie does tag them, however, then that human will inducted into what the zombies joking call the Zombie Horde. Both teams have to formulate strategy and rely on stealth.

Throughout the week, missions raise the stakes for the human players and provide ample hunting opportunities for the zombie team. The missions vary. In one mission, players may have to escort one of the moderators disguised as a character across campus while deftly avoiding zombies. For another, players may just have to retrieve a hidden item from the quad. There’s rarely ever a repeated mission across the week.

Andrew Wilson, a biology student, is the Mission Head for the game and is in charge of designing and overseeing all of the missions. As somebody who has his hands in every mission, he has enough experience to pick favorites. “Payload style,” he decided. “Where a big group moves from one side [of campus] to another defending or capturing things along the way.” While being entirely optional, the missions add space to the game and help foster a sense of community and teamwork between first time and veteran players.

It’s that sense of community that keeps players coming back year and year. The returning players or as called the “veterans”, make up the backbone of the game. The veterans are HvZ’s most passionate players. They can usually be seen at special events like the midnight walk in elaborate costumes. They act as squad or community leaders for the game and often offer training opportunities to new players and help welcome in new members. Welcoming in new members in important. It keeps the community going and makes the game more fun and more difficult for everyone.

The game, by design, helps new players integrate into the community well as moderator Grace Gholston explains. “HvZ fosters an enormous sense of community among both the human side and the zombie side. In that, anyone wearing a game band can feel welcome to approach any player and say ‘Hey, I’m trying to get to this class. Can you come with me?’ or ‘Hey, I want to hunt humans. Want to hunt together?’ Gholston explained, “and that’s honestly how I met every single one of my friends since college began.”

That sentiment can be echoed by pretty much anyone who has played more than one game. Sam Benson, a chemical engineering student who has already become a zombie this game, listed the immediate impact the game has had on his life. “I’ve met almost all my good friends. I’ve met my girlfriend. I’ve met my roommate. It’s just a fantastic group of people.” While the gameplay itself is an adventure, it’s clear that players are staying for the community and the lifelong friendships the game creates.