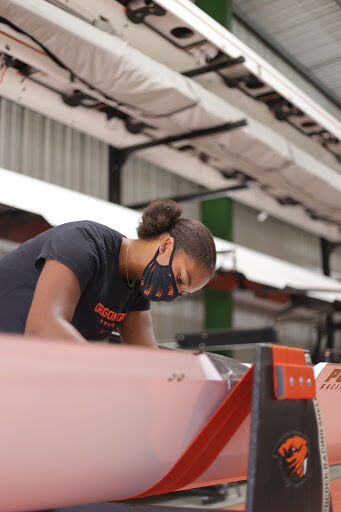 The past year has been one of national reckoning; from the conviction of former Minneapolis police officer Derek Chauvin for murdering George Floyd, to increased coverage of Black Lives Matter, keeping their mission to eliminate systemic and institutional racism in the media spotlight.

But as with all important movements, change starts at the local level—in our neighborhoods, cities and within Oregon State University, which comprises innumerable, overlapping systems within the institution itself.

The Diversity Strategic Plan, which launched in 2018 as a five-year plan to end in 2023, affirms the university’s dedication to diversity and inclusion, and ensures that diversity is an integral part of the OSU identity.

According to Alexander, over the last academic year, various notable antiracist initiatives were implemented and several more are in the works.

“On Wednesday, Sept. 16, 2020, then-President King Alexander announced the steps the university is undertaking to move the university forward and undertake actions in response to calls from members of our community,” Alexander said in an email. “Those actions are outlined on the Moving Forward Together website.”

“Diversity, Equity and Inclusion efforts occur by several units across campus and we will celebrate those efforts during our State of Diversity Address later this spring,” Alexander said.

“In my opinion, for an initiative to be anti-racist, I believe it should be a message that emphasizes the importance of education in inclusivity,” Bishop said.

Spreading the meaning of inclusivity and equality help to improve people’s understanding of what the term ‘antiracism’ really means, she explained.

“Since I am a student-athlete here at OSU, the most active anti-racist initiative I’ve been aware of is DAM Change,” Bishop said. “DAM Change is a student-athlete platform that brings awareness and understanding to systemic racism.”

Bishop noted that DAM Change is very active on social media, spreading a lot of information on multiple media platforms.

“There are also athletes from all teams at OSU that represent DAM Change so there are many perspectives in affiliation,” Bishop said. “They have a lot of Zoom workshops with conversations involving racial inequity, education and current racial attacks. They do a great job conceptualizing productive problem solving.”

Bishop also said she thinks OSU leaders need to make more of an effort to not only educate its students on antiracism, but emphasize the importance of equality.

“Since I’m the only African American person on the Women’s Rowing team, our Athletic Director and Chief Diversity Advisor Kimya Massey reaches out to me very often about topics like anti-racism,” Bishop said. “He does a great job making me feel comfortable about these topics.”

Bishop also said ideologies like equality and equity teach students of all backgrounds about acceptance, allowing for a much more open-minded and productive community.

“This is a new initiative designed to enhance and recognize the scholarship of pre-doctoral scholars from all disciplines who are committed to Diversity, Equity and Inclusion,” Alexander explained.

“The goals are to increase the presence of DEI committed scholars on campus, create opportunities for scholars to meet with OSU faculty engaged in similar areas of research, and to introduce scholars to the OSU community.”

Another upcoming diversity plan this spring includes having conversations with the President and CEO of the Hispanic Association of Colleges and Universities, Dr. Antonio Flores, as OSU explores becoming an emerging Hispanic-Serving Institution.

This spring, Alexander said OSU had conversations with the Southern Regional Education Board, Rochester Institute of Technology and Xavier University of Louisiana to discuss recruitment and networking with Historically Black Colleges and Universities, as well as Minority-Serving Institutions.

MSI is an umbrella term referring to higher education institutions that serve minority populations, such as HBCUs, HSIs, Tribal Colleges and Universities and Asian American and Pacific Islander-Serving Institutions.

In addition, Alexander noted senior leadership at OSU have been reading Dr. Ibram Kendi’s book, How to be an Antiracist, and attended the Provost lecture series on April 14, which featured Kendi and discussed lessons from his book to develop actionable items for their respective units.

Along with the book, senior leadership had access to a summary of Kendi’s Antiracist Framework, which included detailed descriptions of what it means to be antiracist and racist, as well as definitions of a racist idea, racist policy, antiracist idea and antiracist policy.

According to Kendi’s Framework, an antiracist is “someone who takes action to challenge racial inequity.”

“Racial inequity is created and reinforced by racist policies, which are in turn defended by racist ideas. To be an antiracist, one must fight to eliminate racial inequity as well as the policies and ideas that cause these inequities.”

“This is the first year that there has been an on-campus living community for Black and Indigenous students,” Nuñez Perez said. “The Nia Black Scholar and munk-skukum living learning communities – I think this is a huge step towards cultivating spaces on campus for students to feel safe and be in community in a way that hasn’t previously existed.”

However, Nuñez Perez said for years OSU leadership has faced immense pressure from the OSU community to become more anti-racist, adding that generations of student organizers have been fighting this fight.

“I also believe that given the current social and political climate, they are beginning to listen to students,” Nuñez Perez said of OSU leadership. “To an extent. This for sure has impacted them in that some of them are starting to learn, but there is still a long way to go as much of this work still gets delegated to other diversity initiative-based sectors of the university.”

According to Nuñez Perez, there needs to be a shift in the attitudes of how these issues are addressed, not from a reform mindset, but from that of abolition.

“The university represents a colonial state by being a land grant institution nor were universities established with the intention of letting in [Black, Indigenous and people of color] and queer students,” Nuñez Perez explained. “Until we acknowledge what this system is perpetuating then we can work towards justice and seek out ways to do better.”

recognize what’s performative anti-racist initiatives and what’s not,” Rodriguez said. “Also, actually providing a system for support for students and actively listening to them instead of only passing the mic to BIPOC communities and being a bystander.”

Rodriguez also noted continuing to improve anti-racist Baccalaureate Core initiatives is important, as well as providing support to OSU students and faculty who put tremendous amounts of work into it, calling it an exhausting process.

Nuñez Perez and Rodriguez noted they have openly talked, discussed issues and carried themselves in a way that has been previously deemed “too radical” for ASOSU.

They added the “too radical” attitudes extend towards everyone in their team, in terms of advocating for students through a lens of intersectionality.

“Anti-racist work is more covert than some people think; for us, it has been about having a

different leadership style than in the past,” Nuñez Perez and Rodriguez said. “Yet, unfortunately for this we have faced immense backlash for being who we are.

“Despite the wins, we too have been added to the long history of the ASOSU discriminating against women of color. We hope that ASOSU can be better because they must be better. For ASOSU to truly change, there needs to be more people like us.”