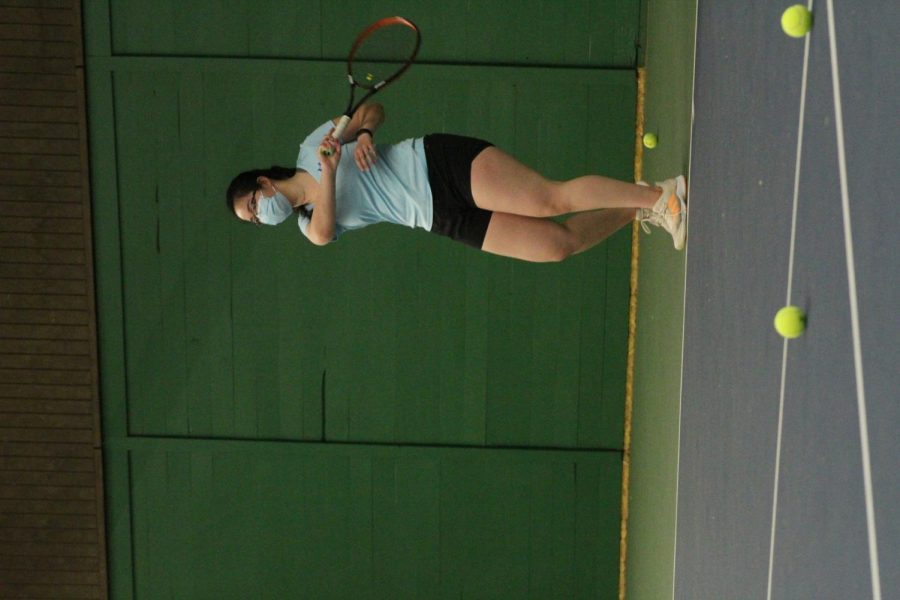 Pictured are some action shots and setting shots of the members of the tennis club having some match play. The tennis club is open during COVID while wearing masks because tennis is a socially distant sport, they have sign ups for practice and matches.

Picture full seats of fans cheering on a tennis match, and a long line of people in front of a theatre ready to enjoy a performance. Organizations and clubs at Oregon State University strive to provide students and the OSU community with a sense of belonging. This past year, they have had to adapt to health guidelines and find ways to keep their community strong.

To adapt to the new COVID-19 regulations issued in March of 2020, OSU theatre faculty developed a new special course called “Sound Design for the Theatre.” For this course, theatre acting instructor Chad Rodgers developed special training for acting and auditioning for the camera, and focused on conducting a playwriting workshop class to develop new plays that could meet the needs of a video project rather than a live production.

“None of this was easy, but I’m proud of how we all stepped up,” said Elizabeth Helman, the OSU Theatre artistic director. “We all found ways to be flexible in a constantly-changing landscape and stayed committed to making a supportive and creative community that could flourish in a challenging circumstance.”

Noah Fox, a second-year theatre arts student, said transitioning to the virtual format was tough at first because being physically on stage with an audience is when he truly feels like himself.

Both theatre classes and OSU Theatre productions had to change their program in many ways, but Helman said the theatre art faculty made efforts to adapt it so students could continue to engage in the creative activities, storytelling and performances. The adaptations focused on safety but were also meaningful and helped students develop skills that will be relevant in the theatre even after COVID-19 precautions are lifted.

The OSU Theatre did not cancel any of their Spring 2020 productions, and instead they adapted their performances to a new online format. The production of “The Importance of Being Earnest” and their annual One-Act Festival were adapted into audio dramas and rehearsals which were all conducted over Zoom.

“Our students are awesome,” Helman said. “I have such a deep appreciation for their willingness to adapt and to come up with great ideas to continue to work collaboratively throughout the past year.”

As COVID-19 restrictions had moved all OSU Theatre productions online, their team took this opportunity to start a podcast called “Dam the Distance,” which is a set of interviews with working theatre professionals who share their experiences about their career paths and making a life in the theatre in both pandemic and non-pandemic times.

The podcast was also where they released all of their audio drama productions during the spring, summer and fall 2020 Helman said.

As restrictions began to ease in Winter 2021, the OSU Theatre team got permission to film a project with limited in-person rehearsals and recording sessions. Helman worked with a group of students to develop an anthology series of short plays set in the same fictional diner between the years of 1980 and 1989.

“Ten Minutes at the Townsend was released at the end of winter term as is available to watch on KBVR TV’s YouTube channel,” Helman said. “We had to follow a very strict set of protocols that covered everything from how we rehearse, to costume fittings, to filming and everything in between. Even with restrictions, the fact that we were able to have some in-person contact was a major morale-booster for everyone involved!”

This term, the OSU Theatre will put together another filmed project to keep up the tradition of the spring One-Act Festival. This will feature four original plays written and directed by OSU students on June 11.

Similarly, other OSU organizations like the tennis club had to cancel their tournaments and could not move their practices to an online format, so they had to adapt to the new regulations in a different way.

The tennis club was allowed to practice in Fall 2020 until OSU imposed more strict measures at the end of the term. During winter and spring term of 2021, they were allowed to host small practices.

“We did not do much training during the times that the indoor courts were closed, but the outdoor courts were open and weather permitting, members were able to go out and play,” said Kevin Pfeil, treasurer of the tennis club and third-year computer science student. “This was not under the provision of the club but getting to play was fantastic. Tennis is a great social distancing sport!”

As the COVID-19 regulations started to loosen up towards the end of March in 2021, the tennis club started getting back to practice.

“It has been great to see some of my friends from [the] tennis club that I have missed since last year,” Pfeil said in an email. “Other than that, not much has occurred as the other main function of [the] tennis club is having members travel to play matches against other colleges. This is of course still not allowed, and we greatly look forward to the time when we will be able to do this and compete again.”

While the tennis group has started to have practices once again, they still respect COVID-19 restrictions and look forward to welcoming new members.

Pfeil said that one of his best moments with the tennis club was when he was in his second year and the tennis club flew out to Lubbock, Texas to play in a tournament against nearby schools.

“This was so incredibly fun,” Pfeil said. “I was able to spend a weekend with some of my friends from [the] tennis club and travel to a place that I had not been before. It also provided a nice escape from the rain in Corvallis. The trip was quick, but I will always remember that weekend.”

The club currently meets every weeknight from 7 p.m. to 9 p.m. at the OSU tennis pavilion. They invite everyone to play tennis and socialize while following health guidelines.

“I am currently looking forward to being able to compete again,” Pfeil said. “I love competition and being able to play my favorite sport and play competitively is a really great time. I have fun playing members from the club, but I look forward to the day that I will be able to play against teams from other colleges!”