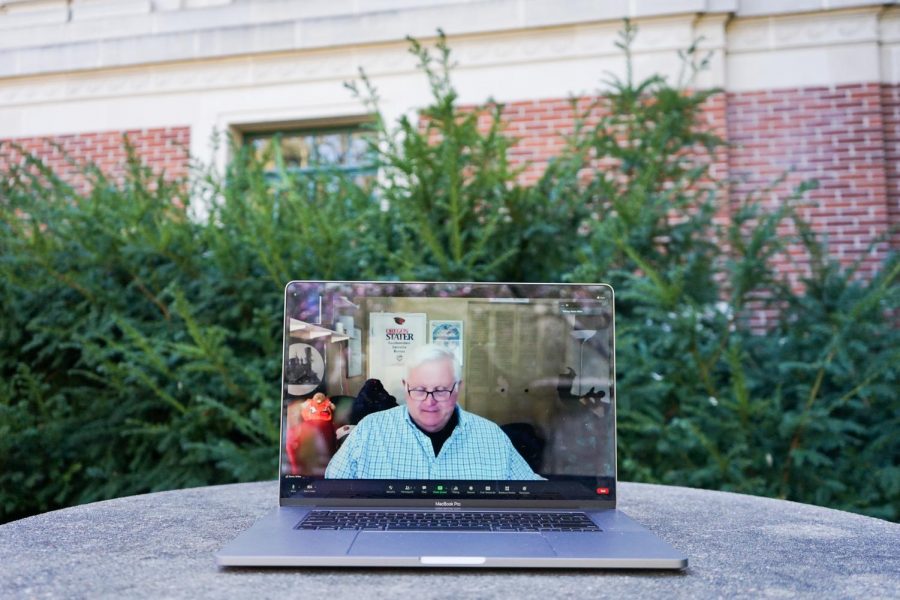 Kevin Miller, a ‘78 graduate from OSU’s journalism program. He didn’t intend on going into journalism, but stumbled upon it on accident, and was lucky enough to discover it to be a passion of his.

Robert Kevin Miller’s desire to watch Oregon State University’s basketball games for free meant that he had to be a full time student.

Initially taking the beginner journalism class in order to make up those credit hours, Miller hadn’t expected to fall in love with the subject and pursue it as his future career.

A 1978 OSU graduate who earned a degree in technical journalism, Miller is now the editor of the “Oregon Stater” magazine, which is published three times a year and sent out to approximately 186,000 alumni around the world. That way, alumni can stay connected with each other and with OSU.

Miller’s office is located in the Alumni Center across the street from Gill Coliseum, and although Miller now has to work from home due to the pandemic, he misses the Corvallis campus atmosphere. From his second story window, he used to observe students passing by, and it would not only bring him back to his own university days, but also ignite his vision for future Beavers.

As Miller was taking his beginner journalism class, his professor had submitted one of Miller’s stories to “The Daily Barometer” without telling him. Once the story had been printed and Miller’s professor had supported him in recognizing his talent, a lightbulb flickered on inside of Miller, who was no longer someone feeling lost without a sense of direction.

He later came to be editor of “The Daily Barometer,” again encouraged by his professor, and went on to work in journalism for much of his life, going from interning at the “Corvallis Gazette-Times” to being Senior Editor of the “Register Guard” in Eugene when it was Oregon’s second largest paper.

Many years later, after having worked in the newspaper profession for so long, Miller wanted to look for a change, for reasons of fearing the financial instability of the newspaper business and the need to make time for family. It wasn’t until one day Miller had received a phone call from OSU about a vacancy in the editor position for the “Oregon Stater” that he had considered applying for the job, which led him to his current title.

Like many other OSU graduates, Miller has been a part of the OSU Alumni Association to give back to OSU and support its students like those who had helped him before, especially his journalism professor.

“When I came to OSU,” said Miller, “There were people who said, ‘Come on, Kevin. You don’t really have a clue what you’re doing. But we can help you figure it out. And then we will show you how to do it. And then we will encourage you.’”

The OSU Alumni Association is located in the Alumni Center, and their mission is to connect alumni with current students and offer resources and opportunities for those students to be successful.

Lori Rush, another member of the OSU Alumni Association, had graduated in 1978 with a Bachelor’s degree in business administration and is currently the president of her own company called Rush Recruiting & HR. She works as a hiring and career consultant and mentors people on resume writing, interviewing skills and the job search process.

In addition, Rush volunteers on the OSU Alumni Board of Directors and has been serving as the chair of the Board of Directors for six years now. Because of her expertise in career development, she uses it to organize professional seminars and workshops, which are meant to be of assistance to both students and alumni. Her involvement in this area had started within a few years after graduation.

Similar to Miller’s story, Rush also had a network of support in college, so she wants to help students who come after her and continue that cycle of positivity.

“It’s the right thing to do, it really is,” said Rush. “And I think members of the OSU community—including the teachers, friends, alumni, anyone that supported us—were there for us, and we feel obligated to pay that forward and we want to, and it’s also a lot of fun.”

Along with Rush, Julie Lambert also volunteers on the OSU Alumni Board of Directors and has been involved with the OSU Alumni Association for about 10 years. She graduated from OSU in 1985 with a degree in business management and now has her own consulting firm named Lambert Group Corporate Solutions.

Miller, Rush and Lambert all voice that OSU has the potential to transform students, and this ties in with their goal of wanting to support students so that new generations of Beavers can have the knowledge to change the world.

“This is where I focus all of my time and energy at OSU, because I love to see the next generations coming up and solving the world’s problems and helping the world,” said Rush.

To Lambert, the most important course of action to take is equal access to higher education, made possible by providing donations towards scholarships.

Miller, Rush and Lambert all acknowledge that being a student had been much less expensive for them back then since the state had contributed a higher percentage of money towards university expenses, which resulted in a lower tuition.

Miller even recalls that it had been cheaper to be a student than to not be in college at the time. He had graduated with only a few hundred dollars in debt. With all of this in mind, they all understand the financial pressure on students today as compared to before.

“We [the OSU Alumni Association] attract a lot of alums who kind of feel the same way,” said Miller. “They’re basically people, for the most part, who’ve had a good experience here. And we want you kids to have a good experience, too. And you’re graduating into a world that’s a lot tougher than the world we graduated into.”

According to Rush, the OSU Alumni Association has recently started a new endowed scholarship to offer financial aid to students. It’s a very rewarding experience when Rush attends the luncheon for the scholarship recipients, who express their immense gratitude.

“We’re just so happy to help out,” said Rush. “It’s helping a Beaver, coming together to help people make their path a little easier through college and to go on to graduation, have a successful life. And there’s times where we’ve helped students, and throughout the years, they’ve come back to help out. You make those friends, and that Beaver connection is just very strong.”

Moreover, Rush and Lambert were thrilled to announce that, in response to the pandemic, the OSU Alumni Association has recently launched a new project called OSU Connections, an online portal that aims to build community by connecting students and alumni. For instance, if students are looking for jobs, they can develop connections by finding alumni who work in those fields, and these alumni can serve as mentors to help students land the job that they want.

Likewise, Miller manages to use his position as editor of the “Oregon Stater” to create a bridge between students and alumni as well. He describes it as shining a spotlight on OSU’s excellence and achievements, which not only increases philanthropy, but also allows alumni to stay in contact with the university and drives them to become more involved.

As a result, these alumni reach out and offer internships and job shadowing opportunities to students. Miller himself lets students work and intern alongside him, too.

Interestingly, students can also get involved with the OSU Alumni Association by joining a student organization named the Student Alumni Ambassadors. Benefits include meeting alumni and taking on leadership opportunities like being a part of the OSU Alumni Board of Directors.

All in all, Rush notes that, although students may not know this, there is a community of over 200,000 alumni who are devoted to helping students no matter what.

Reflecting back on when they were students at OSU, Miller, Rush and Lambert all feel so much pride, nostalgia and gratitude, each of them having graduated with a sense of purpose and life-long friends.

“For every student who’s been on Oregon State’s campus, or if they’re there for one year or multiple years, whether they graduate or not,” said Lambert. “I would hope that as people reflected back on their time in Corvallis, it would be positive; that they would remember how special a place it is and just kind of keep that in their heart as they go on and are doing other things.

“I always have found Beavers to be open, welcoming, kind, generous with their time, and we just need more of that in the world, and I really like that that’s part of the culture of our campus and our unit.”