History Has Its Eyes on Us 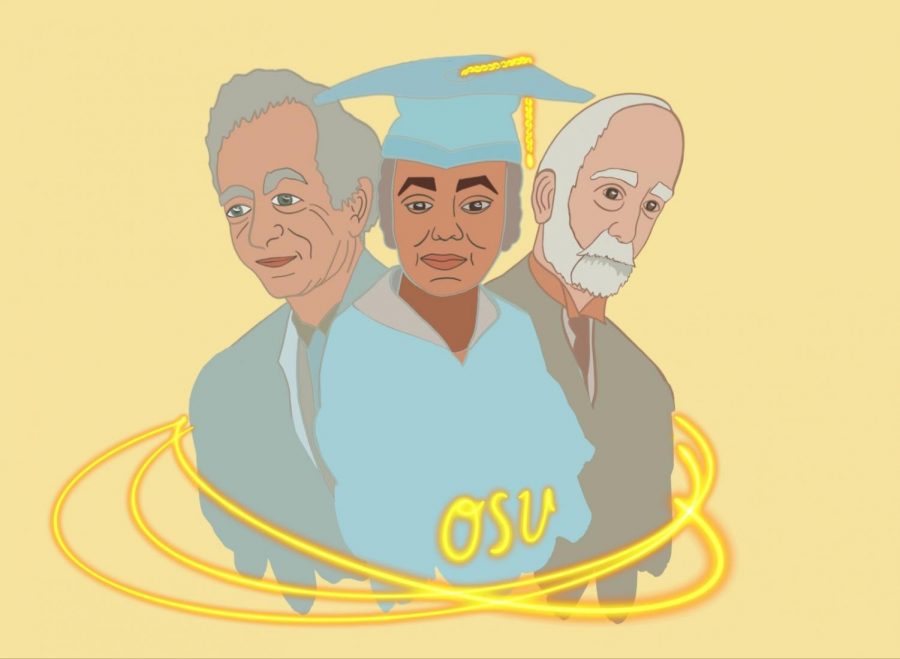 This is an illustration of three of the many historical figures to graduate from Oregon State University. Linus Pauling (left), Carrie Halsall (center), and James Withycombe (right) all left lasting legacies at OSU.

On October 27, 1868, Oregon State University was declared as Oregon’s land-grant institution. Over the years, students have graduated from OSU and soared their wings to help change the world, leading some of them to even win honorable awards.

“It’s [OSU] a long tradition of working to be of service to Oregon and producing graduates who serve Oregon, too,” said Lori Rush, a 1978 OSU graduate who now volunteers on the OSU Alumni Board of Directors. “It’s been around for a long time, and it’s the one thing that I’m so proud to share with people.”

The following list provides just such examples of ten notable alumni and the impacts they’ve made.

Because of his expertise in farming and livestock raising, he was appointed Oregon State Veterinarian in 1889 and joined Oregon State University (which was then the Oregon Agricultural College) as the head of the college’s experimental farming station in 1898. He was also named the governor of Oregon in 1915. Withycombe Hall is named in his honor.

Shortly after he had graduated in 1916, Allworth earned the Congressional Medal of Honor in 1918. Following World War I, he significantly supported fundraising for construction of the Memorial Union and came to be the building manager. In 1925, he held the position of secretary and director of the OSU Alumni Association.

He is the only person to have ever received two unshared Nobel Prizes, one for chemistry in 1954 and one for peace in 1962. Pauling was a graduate in the OSU class of 1922 and worked as a scientist, humanitarian and peace activist.

His research focused on micronutrients and their use in human health and disease prevention, and he founded the Linus Pauling Institute, which continues his work. The Ava Helen and Linus Pauling Papers contains an archive of his materials and awards.

In 1926, she was the first African-American student to have graduated from Oregon State University with an undergraduate degree. After having obtained a Bachelor of Science degree in Commerce, she went on to teach business education at Virginia State University and South Carolina State University. Halsell Hall, a residence hall on the south side of the OSU campus, is named after her.

Tebeau Hall on the east side of campus honors him as the first African-American male to have graduated from OSU in 1948. He later established a career in highway engineering and education.

An OSU alumni who graduated in 1948, he invented the computer mouse and started the idea of email. Engelbart was awarded the National Medal of Technology in 2000 by President Bill Clinton.

He was a two-time winner of the Pulitzer Prize, and the National Press Foundation named him as Editor of the Year in 1989 when he was editor of the “Orange County Register.” He has also been editor of “The Oregonian” and “The Register-Guard.” Anderson graduated from OSU in 1972.

His work as a visual effects art director and production designer has won him an Oscar, an Emmy and an Annie. He has helped with the production of “Ratatouille,” “Monsters, Inc.,” “The Hunt for Red October,” “Innerspace” and “James and the Giant Peach.” Jessup graduated from OSU in 1976.

He is the co-founder and CEO of NVIDIA, an American multinational technology company. He was named Fortune’s Businessperson of the Year in 2017. Huang graduated from OSU in 1984.

Of course, there are many other outstanding alumni amongst these ten. Let them be our sources of inspiration, because one day, we will also be following in their footsteps as Beavers by advancing our aspirations and making the world a better place in continuation of their legacy.