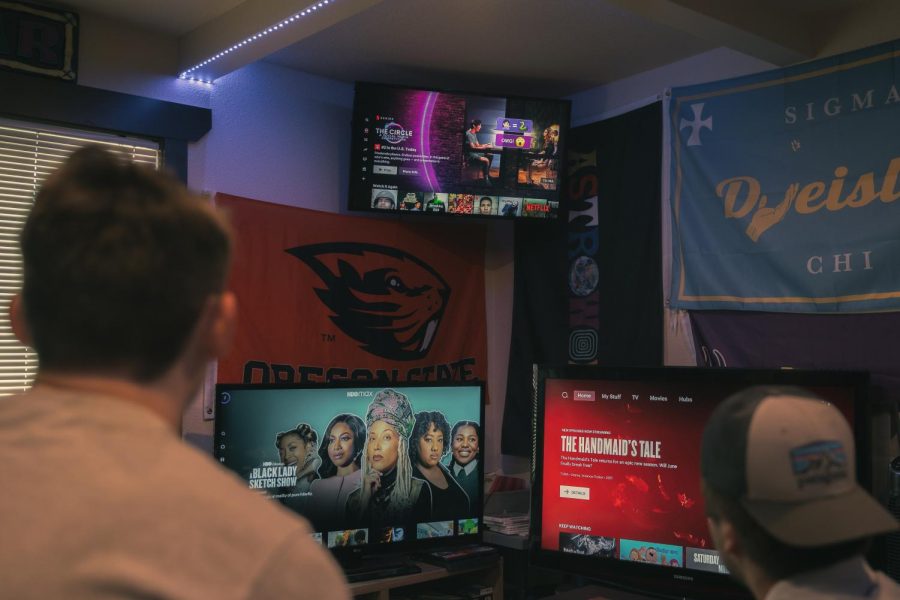 Streaming services dominated the entertainment, film, and TV industry with limitations in viewing from COVID-19. Still, shows like “Tiger King” on Netflix or the release of “Hamilton” on Disney+ kept people engaged and entertained while sheltering at home.

In the last ten years we’ve seen some serious advancements in consuming content, and the subsequent rise in demand has led to one of the most content-heavy periods of time we’ve ever had. At the beginning of a new decade of film and television, we’re going to recap some of the biggest releases since the start of 2020.

When “Sonic the Hedgehog” was first revealed, the titular hedgehog’s design sparked negative outcry from fans who were disappointed Sonic looked so different from how he looked in the games. After a delay and a character redesign, “Sonic the Hedgehog” pleased longtime fans without alienating newcomers, with standout performance coming from the eccentric Jim Carrey as villain Dr. Robotnik.

“Better Call Saul” returned last year with its fifth season on AMC. A prequel to “Breaking Bad,” “Better Call Saul” follows lawyer Jimmy McGill as he transitions into his shady alter-ego, Saul Goodman. Fans of the parent show will recognize many of “Better Call Saul’s” main characters as we delve into each of their pre-criminal lives. The show does a great job of honoring its “Breaking Bad” roots while also creating a unique identity for itself.

An absolutely bizarre true-crime story, Joe Exotic is the “Tiger King,” a redneck big cat park owner accused of trying to murder rival Carole Baskin. Joe and Carole proceed to go at it trying to screw each other over in a misadventure that honestly can’t be described with mere words. But one thing’s for certain: Carole Baskin definitely fed her husband to a tiger.

Originally performed on Broadway in 2016, the musical “Hamilton” came to Disney+ last July. It came as a surprise to Disney+ subscribers, as musicals weren’t on the streaming platform’s original content lineup. “Hamilton” was also big for the platform in another way, as it was Disney+’s first non-Star Wars release since launch.

Helmed by veteran director Christopher Nolan, “Tenet” is more of an experience than a film. With time seemingly bending all around him, a nameless protagonist navigates a terrorist threat armed with only the title codeword, Tenet. A modern day “Inception,” “Tenet” will leave you asking “What the hell just happened?”

A satirical take on the superhero genre, “The Boys” is a story where the heroes are corporate sellouts to an alternate Disney. After a “Supe” kills his girlfriend, Hughie Campbell teams up with Billy Butcher, who shows him the dirty supe underworld. Vile, gory and crude, “The Boys” doesn’t pull any punches and delivers a tight, hilarious and disturbing second season.

Disney’s flagship project, “The Mandalorian” returned for its second season last October. Jon Favreau and Dave Filoni are back as writer and director with more adventures for Mando and Baby Yoda. This season begins to connect “The Mandalorian” with the larger Star Wars universe, continuing stories from “The Clone Wars” and “Star Wars: Rebels” in a sophomore season that lives up to the hype.

The latest entry from Pixar Studios, “Soul” follows Joe, a band teacher who falls into a coma after a near-death experience. Finding himself as a soul in the Great Beyond, Joe meets another soul who has yet to be born. A poetic commentary on purpose and identity, as well as flexing Pixar’s advanced animation technology, “Soul” certainly has got soul.

“Cobra Kai,” the sequel to ‘80s hit “The Karate Kid,” premiered its third season on Netflix. Featuring all the ‘80s nostalgia you could ever want, “Cobra Kai” honors the original movies while taking the franchise in a fresh new direction. Originally debuting on YouTube Premium, it recently moved to Netflix after YouTube didn’t renew it for a third season. Fans can sit tight, season four has already started production.

After a year and a half hiatus due to COVID-19, the Marvel Cinematic Universe returned to Disney+ in January with “WandaVision,” where Wanda Maximoff and the Vision live through various sitcoms after the events of “Avengers: Endgame.” A mystery unfolding in all sorts of different directions, “WandaVision” is all the right kinds of weird.

Shortly after, “The Falcon and the Winter Soldier” premiered. You’ll never guess which two characters it’s about as they deal with the death of Captain America and its aftermath. This is only the beginning of Disney’s releases for this year, as there will be no more than two weeks without Marvel or Star Wars content for the next six months. Stay tuned.