‘Dancing to the Same Rhythm’ 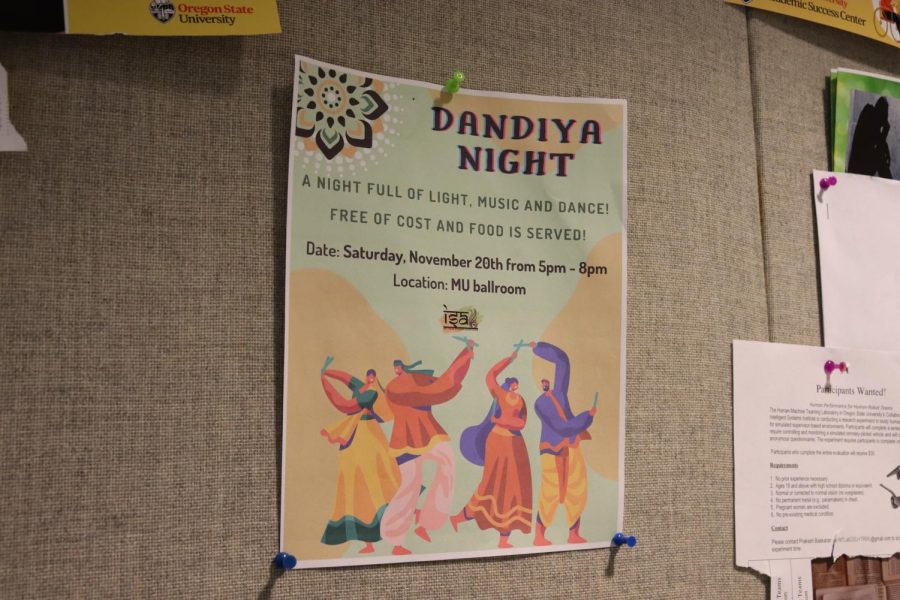 The Dandiya festival flyer is posted on a bulletin board in the Valley Library. On Saturday, Nov. 20 the Oregon State University Memorial Union Ballroom will be transformed to hold the fourth-annual Dandiya Night event hosted by the Indian Student Association.

On Saturday, Nov. 20 the Oregon State University Memorial Union Ballroom will be transformed to hold the fourth-annual Dandiya Night event hosted by the Indian Student Association. The event is completely free, open to everyone, will take place from 5 to 8 p.m., and will include music, food, dancing and instruction on how to perform dandiya, a cultural dance of India.

In 1979, the ISA was established by a group of graduate students to bring together Oregon State’s Indian community. Ever since then, the group has been working to enhance the understanding and involvement of their culture at OSU. They achieve this by organizing fun cultural activities and events around campus that aren’t just a good time, but also expose and inform people on the rich culture they have to offer. One of those events is Dandiya Night.

“2018 was the first year we tried Dandiya Night,” said Yesha Jhala, co-president of the ISA. “Before that, it was a Diwali Night type situation and it wasn’t the best outcome, so that’s where Dandiya Night started to see if more people would come and join in.”

The first go around, the turnout was still not up to expectations but they tried again in 2019. That time, it was a success. “It was a full house in a way,” Jhala said. Then in 2020, they tried to do it over Zoom where they choreographed a dance and taught it to people who tuned in to the virtual event. However, it was difficult to get people involved without being in person. So, when the OSU campus reopened for the fall term they wanted to do it right once again.

“When everything was starting up, we were like ‘for sure, we want to do it again’ because a lot of people enjoyed it, it was fun and people get to wear their Indian clothes which we don’t get to do a lot here,” said Jhala.

The Indian clothes Jhala refers to here can point towards many different styles of traditional garments worn in India, and she’s right, they don’t get enough opportunities to show them off here, but not for the reasons you might be thinking of.

“For most of them it is because they are so heavy,” said Shruti Sadhu, a graduate student at OSU and member of the ISA. “It would be a lot of work so we need a special occasion to put in the effort.”

Some of the clothes are so heavy and require a lot of work because they consist of jewelry, makeup and many layers of material. “The fancier it is, the heavier it is,” Jhala said. One specific type of Indian dress that will be worn by members of the ISA during Dandiya Night is called a lehenga, which is an ankle-length skirt decorated with embroidery and is popular throughout India.

The main attraction of the event is that ISA members will be guiding everyone through an Indian dance called dandiya. It originated from Gujarat, a state in the west of India, as a special dance to celebrate Navaratri, a widely celebrated nine-day festival. When performing the dance, dancers utilize special sticks called dandiya sticks and a simple five-step technique.

“Navaratri means nine nights when translated, and in India, we celebrate it for the goddess Durga,” Jhala said. “The meaning behind the goddess is that she defeated a demon that couldn’t be defeated by a god, and the whole idea behind dandiya is that the sticks symbolize the weapons she used in the fight.”

Not only is it fun, but it also has deeply-rooted cultural significance behind it in India, and the ISA is bringing that culture to us at OSU. It is an opportunity to learn more about one of the many diverse cultures we have living within our community and is an opportunity for Indian students to feel more at home.

“We don’t get to do it anywhere because it needs proper setup, you need dandiya sticks, and here we are providing this for everyone who is attending the event,” Sadhu said. “It also looks very beautiful when you see a large number of people dancing in the same rhythm.”

Along with guiding people through the dandiya dance, the ISA is also preparing some traditional Indian food to serve at the event. Dishes like papdi chaat, biryani and raita will be on display. Papdi chaat consists of garbanzo beans, potatoes, onions, tomatoes and papri which are like fried tortilla pieces. Biryani is a spiced rice dish with stir-fried vegetables and raita is a yogurt dish with onions, cucumbers and other vegetables.

These foods, along with the traditional garments and the dandiya dance, will all come together to celebrate Indian culture as a whole right here on the OSU campus. The event is first-come-first-serve with a maximum capacity of 238 people, and will be held on Nov. 20 starting at 5 p.m.—masks are required for all attendees.