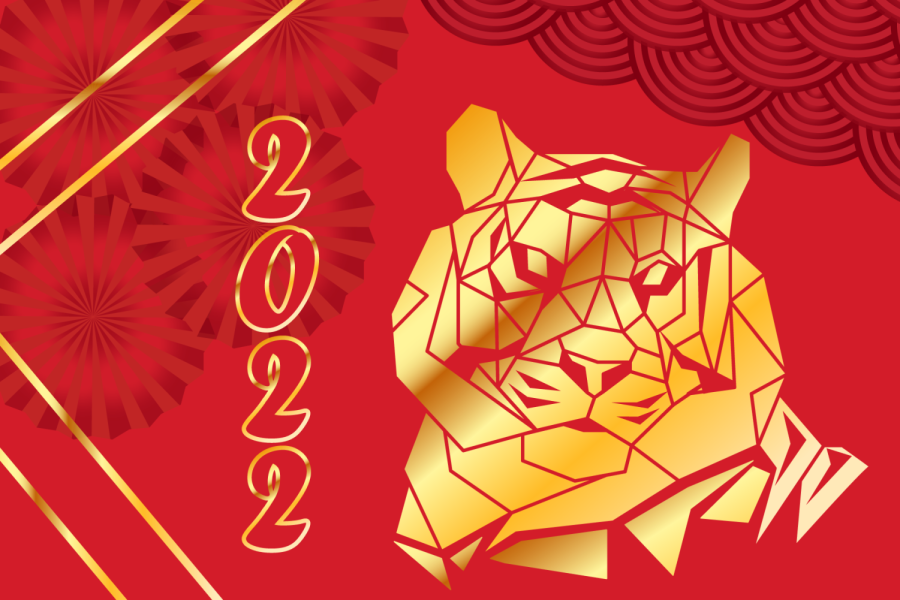 Chinese New Year is a special holiday celebrated in Chinese culture as it marks the start of the new year on the traditional lunisolar Chinese calendar. 2022 is the year the Tiger as this illustration depicts.

Legend has it that starting from thousands of years ago, fire was used as a means to protect people from a monster named “Nian” in Chinese, which translates to “Year.” This gave rise to the holiday Lunar New Year, which follows the tradition of lighting fireworks and firecrackers to ward off evil.

Lunar New Year begins on Feb. 1 of this year, and celebrations last for 15 days culminating with the Lantern Festival that marks the full moon on the last day.

For many students at Oregon State University, the arrival of Lunar New Year represents cultural significance to them. For example, Audrey Li, a second-year student who is the historian for the Asian Pacific American Student Union and is studying environmental sciences, explains that Lunar New Year helps her connect more deeply with her cultural roots.

Since her parents are immigrants from China, Li’s family tries their best to retain Lunar New Year traditions by carrying out preparations like cleaning the house and adorning it with floral decorations to clear away the bad luck and welcome the good luck and prosperity of the new year.

Back in her hometown Hawaii, Li would attend the Lunar New Year Festival held in Chinatown, where she would spend time together with her family, eat hearty food and watch a lion dance parade, although her absolute favorite tradition was receiving red envelopes filled with money.

“The holiday helps me feel closer to my culture since I never learned much about why we do these traditions and why we eat certain foods on Lunar New Year, but going to college and being far away from my family’s celebrations has made me realize that these are important things that I want to keep alive in my life,” Li said.

Similarly, Alyssa Abonitalla, a fourth-year student studying biohealth sciences, values Lunar New Year for the opportunity to invite peace and prosperity for the upcoming year, and most importantly for her, the holiday centers around family.

“The significance of [Lunar New Year] is being together with my family,” said Abonitalla. “With the current times, it’s pretty rare for my family to all be together at the same time, as most of us are working jobs or focusing on school, so I do cherish any sort of holiday where we can all be together without the stressors of the outside world.”

Like Li, Abonitalla and her family also uphold the tradition of cleaning their house before the Lunar New Year. Additionally, Abonitalla celebrates Lunar New Year with her family by eating noodles that represent longevity, making lumpia (Filipino spring roll), wearing polka dot patterns or the Pantone colors and stuffing their pockets with cash for good luck.

Coming from a Filipino household, they would get 12 round fruits, which symbolizes money for each month of the year and is believed to attract fortune for the new year. When Abonitalla and her sister were younger, they would receive red envelopes, but her favorite tradition over the years is getting dim sum with her family while enjoying the dragon dance on Lunar New Year.

Another student, Chris Hu, is an international third-year student from China studying finance and mathematics. Back in China, she remembers having a longer winter break from school to allow ample time for traveling to visit family and celebrating the Spring Festival.

“Lunar New Year, which is also called Spring Festival, is the most important holiday [I look forward to], just like the status of Christmas in Western culture,” Hu said. “It’s a time for family reunions. And it is my favorite tradition.”

In the United States, though, the difference for Hu is that she doesn’t have school off for the holiday, so she tends to be busy with midterm season and finds it more difficult to make time to celebrate and fly back to China.

“Our goal of the meeting is to educate those in the Asian and Pacific Islander community about how other cultures celebrate Lunar New Year and to start a conversation about the commercialization of an important holiday to our cultures,” Li said. “We’ll also possibly go over the traditions and history of Lunar New Year as younger generations feel distant as to why they do these traditions and why it’s celebrated.”

Prior to attending OSU and having grown up in a predominantly Caucasian city, Abonitalla had often felt a disconnect with the Asian community, but coming to OSU has opened her eyes to new cultures and improved her awareness of the meaning behind Lunar New Year. Keeping that in mind, social justice conversations like the one being planned by APASU are important for OSU’s mission of diversity, equity and inclusion.

Lunar New Year is celebrated all over the world, and anyone is welcome to join in on the fun as we enter into the Year of the Tiger.