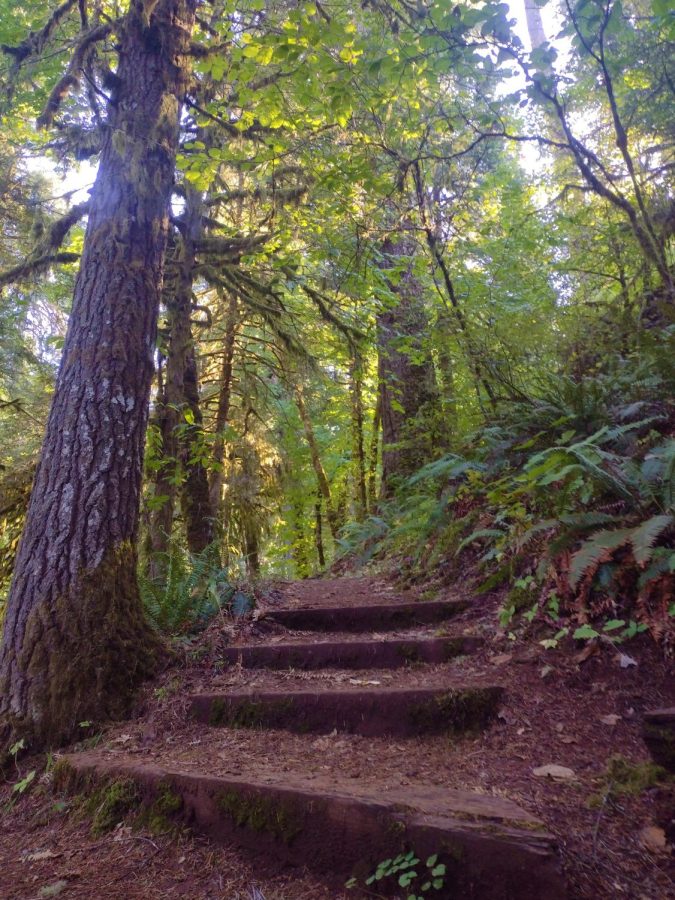 The sun peaks through the old growth vegetation in the McDonald-Dunn Forest on Friday, Oct. 1.

We only have one earth to live on, so why don’t we give back to our planet and treat it well this Earth Day?

Earth Day is important to know about because it brings awareness to more people, according to Donna Tarasawa, First Alternative Co-op outreach specialist.

“There are people who live their lives as if every day were Earth Day,” Tarasawa said. “Other people maybe weren’t raised that way. So having that awareness to let them think about it more and maybe suggest some things that can be helpful, I think people need that and young people need that story as well.”

Stacey Harper, Oregon State University environmental and molecular toxicology professor, thinks bringing awareness about these topics is important too. She said this focuses on education and having people keep it at the front of their minds.

Harper said one way to celebrate Earth Day is by sitting out in the rain and sharing research about plastic solution which is what she was able to do at OSU’s Beyond Earth Day Community Fair. The fair took place on Tuesday, April 19 in the Student Experience Center Plaza where other groups, including Harper’s booth, celebrated and provided information about the earth.

According to Brittany Cunningham, OSU toxicology student in Harper’s lab, we can give back to the earth by trying to live as greenly as possible.

“I think we know that there are corporations polluting and other things going on, but I think if each of us makes the best effort that we can to choose practices each day that are going to try and keep the earth clean and healthy as long as possible,” Cunningham said.

OSU Hiking Club Event Coordinator Emery Ashdown said every step we take is going to impact the earth we live on in some way. They said we are part of the big system of nature and we have to make sure we don’t mess up any of the natural beauty that’s out there.

“This is the only planet we’ve got—there is no planet B,” Ashdown said.

Tarasawa added that there are so many reasons why local is better since it’s better nutrition, better for the world and better for your neighboring farmers who you’re trying to support.

“Certain produce are from the tropics, that’s why they’re the most expensive item here,” said Judy Dugan, First Alternative Co-op helper. “These can be grown right here in Corvallis, Ore. Salt, tomatoes, onions.”

“You can recycle and all that, but if you don’t know what’s going on, who’s doing what, how it ultimately ends up in our water or air or soil, you’re not really able to give back,” Ashdown said.

Good places to visit on Earth Day include the ocean and rivers, according to Harper. She said rivers offer a lot of aesthetics, as much as the ocean. The ocean is also colder in Oregon, but rivers are nice and warm.

Ashdown suggested visiting somewhere that has something growing and a good nature concentration. Places like the OSU campus and Bald Hill, which have lots of flora and fauna, are what they recommended.

“I really do like McDonald-Dunn, but I saw William L. Finley [National Wildlife Refuge in Oregon] for the first time on Sunday and I was really blown away by that,” Ashdown said.

Harper said that people can contribute every day by making those small decisions like not using plastic bags at the grocery store.

People can celebrate by getting outside and taking a closer look at the plants they pass by or the birds they hear and understand where their place is in the world, according to Ashdown.

“We’re experiencing all this not as owners, but as guests, and you can really celebrate Earth Day every day,” Ashdown said.