Speaking their language: How well do you know your pet? 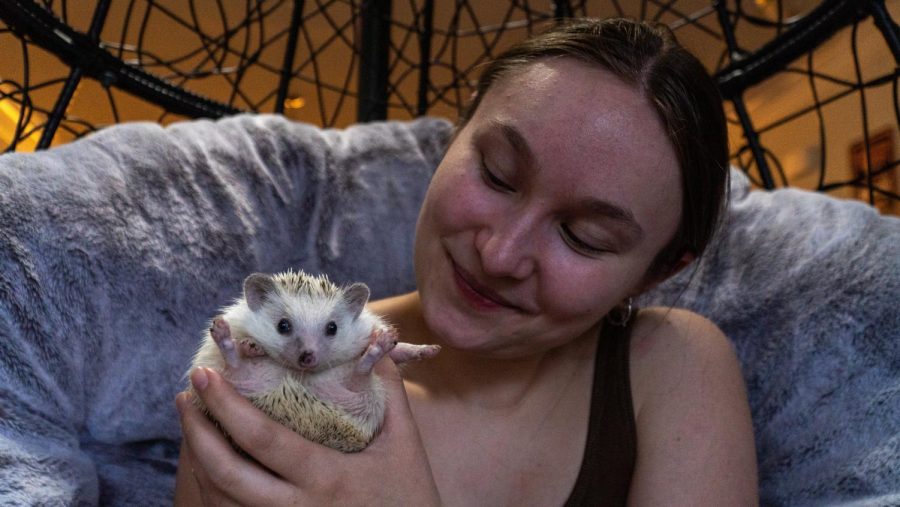 Salchicha Fischer, and her human, Sophia Fischer, spend some quality time together on May 11 at her home in Corvallis. Animals can form extremely strong bonds with their humans which means we humans need to be sure to reciprocate that bond to help our animals emotions.

Pets have been shown to help humans in many ways, but are we doing the same for them?

According to Giovanna Rosenlicht DVM, senior instructor I in Animal and Rangeland Sciences at Oregon State University, cited benefits of having pets include reduced depression and shorter time periods spent in hospitals after cardiac events. Additionally, people with pets feel less lonely as well as have greater satisfaction with their lives.

Dr. Monique Udell, an associate professor in Animal and Rangeland Sciences at OSU, stated that “there are many ways having a pet might be beneficial, including providing feelings of support, companionship or responsibility.”

She noted that dogs, for example, have been shown to increase physical activity in their caretakers as well as improve their health outcomes after injuries and illness.

Udell said, “for children, animals can sometimes provide a sense of security and comfort, especially in challenging times.”

According to the Centers for Disease Control, pets provide reasons to socialize, get outside and participate in more physical activity. Bonding with your pet has also been shown to reduce blood pressure, to reduce cholesterol levels and triglyceride levels and to reduce feelings of anxiety, loneliness and PTSD symptoms.

Rosenlicht noted that there have been concerns that some studies have been conducted biasedly to support human-animal interactions by selectively choosing information.

“I say this as a veterinarian and a person who has multiple multiple pets in my house, and I believe they give me immense benefit, but the concerns are that the people who do the studies typically are looking for positive results,” Rosenlicht said.

Rosenlicht talked about the bond with her animals, “they’re non-judgmental, they’re supportive in the way that people can’t be because they don’t have the external life outside.”

Another question raised is how much our animals understand us.

Adam Chouinard, Department of Integrative Biology Instructor at OSU, noted that cognition varies greatly among animals and this poses difficulties when trying to compare these abilities between species.

Chouinard said, “it can be tempting to assume that humans are completely unique among animals, and that very little of what we experience psychologically is relevant to how non-human animals perceive the world.” Chouinard continued, “on the other hand, it can be tempting to assume that non-human animals are just like us in every way, and therefore project our own thoughts, emotions and motivations upon them.”

This is called anthropomorphism, which is known as attributing human characteristics to animals. Chouinard said this is a major misconception brought by people to the study of animals.

Rosenlicht said that as research continues, we’ve become more aware of how much they understand us.

“They’re certainly aware of our emotions and certainly they respond to our emotions, whether they’re responding directly to the emotion or the perception because of physical body language is difficult to say,” Rosenlicht said.

Rosenlicht talked about a study done on elderly people where 90% said they spoke to their animals and 56% said they believed their animals understood what they were saying. However, she noted this was survey based and by owner perception.

For example, dogs often don’t like to be hugged, as it can be seen as a dominance display.

“Dogs do, however, exhibit a ‘play bow’ when it’s time to play, which you may have seen at the dog park,” Chouinard said. “Try that instead and your dog will be happy to reciprocate.”

According to Chouinard, animals can learn some human language, but we should learn theirs as well in order to communicate with them. He mentioned that in some instances, animals may modify their communication when living with humans, such as cats. Cats do not typically vocalize around other cats in adulthood, yet many do with their owners.

Much research suggests that many animals, including common household pets such as dogs and cats, have a wide range of emotions similar to humans, as well as empathy and love towards humans.

This leads to the important question of how to take better care of our pets.

According to Rosenlicht, “a majority of American pets have far too little interaction and are bored a good part of the day. This is because we have to work and things like that, but we need to make sure they have adequate enrichment.” She added, “feeding and caring for them in the normal ways is important but understanding their psychological and physical needs is immensely important.”

Rosenlicht noted one issue common in both dogs and cats is obesity which sometimes comes from owners giving their pets too much food, but can often be the result of boredom.

According to Rosenlicht, it’s important the pet can socialize with members of its own species-under the right circumstances such as being appropriately socialized at a young age.

“The first step to giving animals better lives is to take the time to learn about them and understand them as individuals and as a member of the species to which they belong,” Udell said. She added, “when we try to see the world from their perspective, based on the scientific knowledge that exists, instead of interpreting our pets actions and needs from the human perspective, we can more readily appreciate them and provide the things they need to thrive.”

Udell said that there is much evidence that suggests animals need humans to be available and responsive to both their physical and mental needs.

“This means providing things like attention, species appropriate resources and care, and also, enrichment that exercises their brains as well as their bodies,” Udell said.

Chouinard also noted it’s important to, “check your human bias at the door. We constantly want to make our pets fit their lives around us, but they have an entire evolutionary history constraining them to behave in certain ways-or not.”

According to Chouinard, it’s important to understand animals’ specific needs based on their true nature and biology in order to know how to provide them with the best quality of life.

Chouinard said, “the best thing you can do to be an ethical, responsible pet owner is to learn as much about the species as you can and commit to meeting their specific needs every day for the rest of their lives.”